His heart sunk with every beat. It was heavy, a tad thrilling but at the same time catchy. The cocky, rebellious phase inside of him came to life, and Imai wanted nothing more than to party his ass out tonight! This festival that rocked the streets of Crocus, the Urban Nights as it had been cleverly dubbed, was just the kind of sweaty, untamed festing that he digged. Still not used to alcohols, he would want to sip his cola like any alcoholic, rock his head to the techno and heavy beats, show off his intense freestyle dances and have fun with everyone. The walls were sprayed with neon colors, and neon lights were bound to every light pole, coloring the air in screaming blue, green, purple and orange. People donned their most ‘rebellious’ wear with spiky features and accessories, and Imai fitted in well with his new, sleeveless and rugged jacket. This time, he left the scarf back home, and he had even cut his hair shorter in preparation for this event.

… Man, Mai had spent too much time at the guild lately. Maybe it was because of Luna, or maybe it was just her being bored or lazy or whatever. Whatever the case was, he couldn’t just leave her at the inn all by herself… she was a ticking bomb. He knew that much given what happened back when they baked a cake together. He had to keep an eye on her, but he also really, really, really wanted to go to this event.

So how did he arrive in Crocus with Mai under his arm? You see, a flyer where he read about the coming of the Urban Nights also informed about a strange group of people called PL4GUE who had harassed the staff behind the event and accused them of plagiarism. It was encouraged to report their presence if spotted in the festival, so Imai expected trouble to arise. That was when he got the brilliant idea that could get Mai to come along with him.

Just convince her that Miss Luna was specifically targeted by this PL4GUE group. They apparently had history or something, and PL4GUE wanted revenge for her spoiling some of their evil plans. Such evil plans would include erasing all candy in the world - oh, the horror - as well as forbidding food… as a whole. Food, forbidden. That would definitely convince her to go with him to protect her beloved mother figure as well as keep her under his radar.

“WOOOOOOOOOOOOOOOOOOOOOOOOOOOOOOOOOO!!!” he roared with his rock sign in the air, his hand signaling it as his head rocked. Even in the middle of the street, it felt as if he was within a crowd right in front of a concert stage. This was insane… where did the music even come from? He couldn’t see any speakers… sound magic? Whoever administrated this sure put a lot of effort into it, and Imai was 100% grateful. Although… it would be better if he could spot Kenna and Itori nearby too. Partying with them would be heavenly… with how much people cramped upon themselves, being sandwiched between those two goddesses was one of his highest wet dreams. Obviously, all the other details were censored for good reasons…

“Hey, Maaaaai!” he called to the girl he held under his arm, “Can you heeeaaaar meeeeeee?! We need to fiiiiind Plaaaaaagueeeeeeeeee! Let’s loooooook arooooouuuuuuund!” With that said, hopefully she could hear him despite being hit with music from all sides. Did her God Slayer Magic take this kindly? Imai honestly had no clue… oh shit, maybe it would render her deaf- oh shit, oh fuck, oh no! He had to get some ear buffers or ear steaks… otherwise, Miss Luna would murder him.

Thank god, they got to a place with less loud sounds… but even more drumming. There was a lot of sharp drumming here, and some dude approached them covered in neon paint. “Hey, ya two! Whaddya say, fellas?! Come challenge me!” He nodded towards a circle with drums and lots of neon paint, and Imai realized that it was some kind of contest.

“I-I get it, I get it, alright!” Imai replied before lifting Mai up in the air, “Mai! Make Sabertooth- I mean, make Miss Luna proud! You can play drums, right?!” 
"I know!" Mai exclaimed to the little tree sprite as they played catch with a rock it had retrieved. "Miss Luna's always working on things, but at least she got me you to play with! Miss Luna's the best, isn't she?"

Mai placed her hands on her face, enjoying the presence of the helping hand that Luna had gotten to help watch over Mai. She was fully unaware when Chio laughed again, and Mai heard the familiar voice of her enemy, Imai. He mentioned something about some evil group or whatever, but Mai was too angry to listen to him until he mentioned some details. "Whaaaaat? These meanies are going after Miss Luna, and they're going to forbid food forever! We have to stop them!" Mai scrambled out of her seat and rushed to her room for a moment, gathering two of her many bags of candies, stringing them along her waist as she rushed back out. "Lead the way, dumdum!" Mai barked, popping one of her candies in. "I need to make sure that these meanies don't get their way with everything! I need to show them the error of their ways and beat them up! Wait, but that would mean giving them my candy!" She gasped. "I don't wanna give them my candies!" Imai reassured her, and off Mai went, her and her new guardian tree sprite dashing off with the Sabertooth Ace towards the capital of Fiore.

The noises and lights in Crocus certainly excited Mai, who was distracted enough by it to not realize the utter tragedy of her already having completely eaten one of her bags of candies. Every so often, a partygoer would toss some sort of foodstuff at her or Imai, which Mai would promptly eat, still too distracted by the bright lights and loud noises to really comprehend the situation or the taste. Though Mai had little in terms of partying attire, what she wore was enough to get her in the mood for partying.
"I can hear you, dumdum Imai!" Mai chirped back as she was beneath his arm, being held like a sack of rocks. "Okay, let's go look for those meanies and bash crash pow them! They're trying to ban food and be mean to Miss Luna, and we can't let that happen!"

Not really paying attention to where they were going, Mai soon found herself hearing the rhythmic beat of drums around her. She looked up to see Imai arguing with a bunch of other stupid humans about something. Then, Imai told Mai to play the drums. "I can play drums really well!" she said happily. "Papa told me, and now Chio helps me sometimes, too!"

"Yahaha!" Chio laughed before disappearing in a puff of smoke once more. 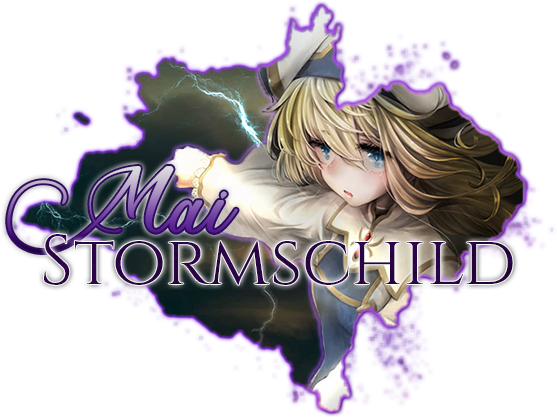 Up until now, things looked stable. Mai was convinced that they were on a cause to save Miss Luna from this organization named ‘PL4GUE’, so she would be within his field of vision for the most of the time. Although, the events of the Urban Nights presented in front of them would likely cause a bigger obstacle than expected. Right now, they wanted to see Mai play drums - there was something adorable about seeing young kids play with musical instruments, so maybe they just wanted to sugar their hearts with her display…

They didn’t know just how maniacal she could be.

She could play drums, she said. Papa told her, she said… Imai knew little to nothing about her Papa. With a god complex like hers, how was her father? Miss Luna, at least, was more than mature enough to be out of the question when it came to who was faulty for installing such behavior into Mai. Oh well, that was a thought for another day…

… Cute companion. A tree leaf and chonk of wood that came to life followed her around. Reminded him of the alien, Sei, that was still sleeping on his back.

Anyway, back to the drums. Imai kept a solid eye on the God Slayer as she began playing, hitting the drums with a stick and watching the paint splash up. It was very bright and messy, but she seemed to have a lot of fun with it. His heart would drop, though, as her statement reached his ears.

“…” Some of the paint landed on his shirt - most likely on purpose from that little rascal - and Imai picked some of it off with a finger and tasted it. Was it even… edible? If Mai had ingested normal paint, then… she wouldn’t like the effects of that.

After a test, it was confirmed; edible, as a dude would assure him who stood next to the Ace, but it didn’t taste good for Imai. Mai accidently broke a drum, and just as always, she blamed her accident on the oh so evil and mischievous Imai. He sweated profusely, annoyed that all her own problems were blamed on him. Even one of the spectators tilted their head in confusion and mumbled: “B-But he didn’t even do anything…”

Alas, she had fun. Imai, on the other hand, was offered to play on the drums too, but something caught the corner of his eye… it was trouble. They sure didn’t wait too long, did they? A pair consisting of a floating liquid as bright as the whole theme of the event as well as a girl with pointy ears clad in neon colors herself - probably from all the ink - were harassing a couple… or well, the girl didn’t seem to put any input in the harassing, for she was too busy using her iLac. The liquid elemental, however, kept latching onto them, and steam erupted from their skins which indicated that it tried to burn them like acid.

Imai leapt up in the air to bypass all the other buzzers and people who heard the screams of the hurt couple and ran, and as some space was cleared in the confusion, Imai landed. With one flick of his wrist, he spawned a black hole that began sucking the elemental into it, freeing the poor man and boyfriend to the crying girl of more pain. Unfortunately, some of the neon liquids latched onto Imai himself…

“… Huh?” the horned, elf-like girl let out in the slightest amount of curiosity that she could muster, “Tch, who the fuck are you?”

“What, who the- no, don’t even pretend like you ain’t got anything to do with this unbearable shit-!” Imai spat back at her in annoyance, but he smelled burning flesh and realized that his new clothes that he had bought specifically for this event were… well, beginning to dissolve in the neon acid.

“… Oh shit, my cloth- YOU BITCH!!!” he roared out of his lungs before kneeing the girl’s chin in a sudden outrage. Delicate as she was, she was knocked out for the count, but Imai’s rage led him to step on her several times just to be sure. “Goddamn demon-looking ass, ‘mind-your-own-business’ looking ass, unneeded distraction from Mai looking ass- w-wait… Mai? Maaaaaaaaaaaaaai?!”