Name: Magnescope
Rank: Legendary(+)
Type: Staff/Telescope (Weapon)
Proof of purchase: https://www.fairytail-rp.com/t14651p425-the-armory#247513
Description: A 1m long staff, dark-red in color and equipped with an inner telescope. Imai got it from his hometown, where he used to watch over the stars in the sky with it. Its structure is very tough, thus not breaking the telescope that easily when in combat. It can be used as a weapon and as an item of studying in many versatile ways.

I'd like for you to choose between the passive and one of the actives to keep, as legendary weapons are only allowed 2 abilities.

Also, what is fragility? I've not heard of a stat like that before.
Imai-chi

Welp, fragility is basically his effect when hit by any offensive attacks (if his fragility is very high, then he easily takes more damage from attacks and etc.) I'm pretty sure it's an actual word, it's like a synonym for vulnerability.

Moved and unlocked at the user's request

Name: Magnescope
Rank: Legendary(+)
Type: Staff/Telescope
Description: A 1m long staff, dark-red in color and equipped with an inner telescope. Imai got it from his hometown, where he used to watch over the stars in the sky with it. Its structure is very tough, thus not breaking the telescope that easily when in combat. It can be used as a weapon and as an item of studying in many versatile ways.

Strengths:
1. It's hard and difficult to break.
2. In combat/missions, the telescope within it can expand the user's view by 100 meters; although, only in one direction.
3. He can both use it as a weapon and as a tool of researching.
Weaknesses:
1. The telescope within it can easily be broken if the staff is harshly damaged at the two ends.
2. It only reaches 1m out, so it's not very good at reaching distancing people.
3. Fire Magic is very effective to it, as the inner telescope + structure can easily be melted.
4. When watching through the telescope in combat (if that's necessary), the user can only look in one direction and blind himself at all other angles. That means that he can only look at max 10 angles around him when using the telescope.

Abilities:
Name: Gale Force: Rapid Wall
Rank: A (Character-Ranked)
Duration: 4 posts
Cooldown: 5 posts
Description: The user spins the staff around himself, spawning a minor hurricane in a certain radius around him. The hurricane will deal swift damage to those within its range, as well as cancelling spells up to its own rank before cancelling. The range of the radius depends on the user's rank as well:

Strengths:
1. It's a very rapid attack, easily hitting anything within the prescriped area.
2. It can break off 30% of people's armor effect for 4 posts when successfully hitting them.
Weaknesses:
1. It depends on the user's rank, if he can reach up to distancing people.
2. The height of this spell's area of effect is only 3 meters; therefore, staying higher than that means safety for the opponent.
3. The user's stamina will be burned up fast with this technique, therefore cutting off 20% of his speed during the cooldown. 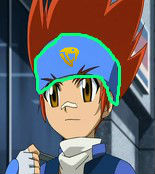 Name: Shirotsume Headband
Rank: Legendary(+)
Type: Headband
Description: Ever wondered of the blue headband that Imai always wears? Well, he got it from his father from the time of his birth, and it appears that it's not as normal as it appears to be...
Somehow, it reacts to Imai's magic power; that's shown by the sudden change and the Sabertooth Crest's appearance on it. Not only that, but sometimes, a bluish light erupts from it for no apparent reason... Strange. Maybe it has to do with the weird light that descended upon him at birth, but who knows..?

Strengths:
1. It boosts the user's endurance by a certain amount, making them less fragile to attacks/spells.
2. It doesn't have to be worn on the forehead; just holding it is enough for the effect to take place.
Weaknesses:
1. It can easily be broken by other spells.
2. If separated from the user's head, its effect is lost.
3. It increases the user's fragility from Light Magic by 20%.

Abilities:
Shield of Shirotsume: For a short amount of time (3 posts), the user's endurance is equal to that of two defensive spells of his own rank; therefore, he can shrug off two attacks with damage power of his own rank away for this duration. After that, he gains a 10% fragility and it has a cooldown of 6 posts.

Lightyear Agility: A sudden, bluish light boosts Imai's speed by 50% permanently (as long as he has the item on him).