It was early in the morning in Fiore, when the full moon rolled away from the atmosphere and was replaced with a gentle, beaming sunshine that illuminated a cerulean sky. Puffs of clouds littered here and there, and the bustling Capital Crocus below. The patches of grass were heavier with fresh morning dew, and a new day was about to begin. Earthland was gorgeously adorned with a natural cloak of beauty, and for Louie, a new day was a chance to seize those treasures for himself.

The day started like any other. Louie carefully hung off the side of his rather large platform bed, his arms slipping into his velvet bathrobe and his feet into indoor slippers. With a clap of his hands, the thick, dark curtains slid away and revealed large window panels that covered the entire wall. Over his balcony, he could see the entirety of Capital Crocus. The way the towers stood in rows and how he could see how the roads weaved through the city, it was like overlooking a kingdom, and it felt like it too. Every day he felt himself seize even more power than the day before.

After that, Louie meandered into his bathroom, stepping into his rainfall shower and lathering his body with expensive oils and soaps. The process he went through to maintain his flawless, unblemished skin seemed to rival that of luxury spa routines, but he could certainly afford it.

When Louie stepped out of the shower, the mirrors that covered the wall were blurred with vapor. He could only barely see where the towel around his waist and his body began and ended, but like every morning, the young multi-millionaire wanted to see his own reflection. How else would he be able to accurately apply his face creams and adjust his hair? And besides, who wouldn't want to see perfection when they first wake up? Needless to say, Louie reached out and wiped away just a patch of vapor from the mirror, but he couldn't believe what he saw.

My face—my body! It's... different?! Is this reality? W-What the hell! Louie thought to himself, staring at his reflection. He could feel his heart stop for three beats and the color drain from his face. His gorgeous golden locks had now turned to a pretty silver, and he was paler than before, even before his fright! Complex black markings ran up his neck and down his arms until they reached the hand with his blood-pact symbol. His very visage had changed, save for his deep, crimson eyes. He'd recognize that beauty anywhere, and he could say that that much hadn't changed a bit.

"William!" Louie shouted, hearing his voice echo throughout the bathroom. "William, come here this instant! It is urgent!"

Without delay, the bathroom door creaked open, and peaking through was the older-aged gentlemen, William. "Yes, Mr. Klein?" he said, somewhat unaffected by the change in appearance despite having never seen such a visage before.

"Explain! Why do I look like this? Give me an answer!" the silver-haired man demanded, expecting for William to have a reasonable explanation for what he was going through. As unfair as his expectations were, Louie was correct.

"Of course, sir. What you're likely experiencing is some sort of illusion—nothing that can change anything but your appearance, Mr. Klein." William explained.

"What?! How exactly does that happen? Can I change back?!"

"Not to worry, Mr. Klein. It's just magic, it's not real. You've likely acquired this from the holy water you drank the other afternoon, and you'll be able to deactivate its effects like you would any of your other powers, Mr. Klein."

Louie paused for a moment and glared at him. "So, this is just an extra I've received? It's not permanent? It isn't real?"

There was a moment of silence between him and William before peals of laughter escaped from Louie's throat. He held his head in his palm and smirked, whipping his face up so he could behold his new features. His crimson eyes were filled with awe as he stared into the mirror, turning and twisting his face this way and that way, looking at his jaw and his supreme hairline.

"What a treat. I suppose beauty comes with all of my shapes and sizes, oui? I can't say that it's superior to my true form, but..." Louie's laughter subsided and his smirk spread across his face, stretching from ear to ear. "William, go fetch me some clothes and contact the gorilla. There's been a change of plans today..."

Hours passed and the noon sun had found itself in the middle of the sky. Somewhere in Capital Crocus, Louie was sauntering down a street and into a restaurant. It was the same establishment where he first met the gorilla and the same place he had told her to meet over the iLac. One way or another, he had gotten her number ever since taking her to get her iLac, and she likely hadn't had a silent hour since. Re: The Devil Wears Prada (aeluri/Louie) 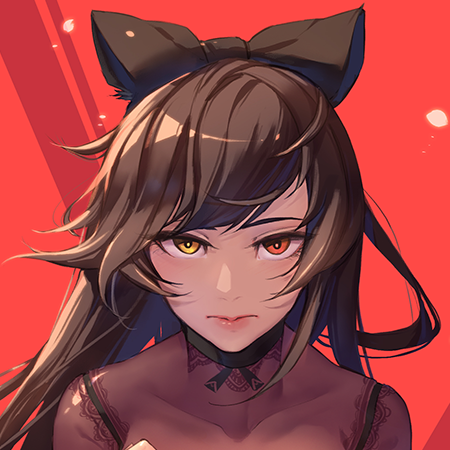 “SHUT THE FUCK UP,” Aeluri roared, grabbing the annoying iLac from the nightstand and hurling it at the wall. The device hit with a loud THUNK and fell to the floor. It was a good thing she had the sense to purchase a protective case for it. Otherwise, she would have been out of an iLac the day she got it. If the dark mage had known Louie would be so annoying with messaging her nonstop, she never would have agreed to get an iLac in the first place.

Getting notifications that woke her up earlier than she ever wanted to be up had become a commonplace, one that pissed her off. Aeluri had turned into a frothing monster in the mornings more times than she could count. Today was no different. Her hands clenched into fists as she lifted her head from the pillow. Raven colored hair sat in untidy strands around her head. Drooping mismatched eyes opened slowly, revealing her furious gaze to the world.

A few deep breaths and she had started to calm down a bit. Maybe Louie would leave her alone and she could go back to sleep. Yeah, that would be nice… Her head had just hit the pillow again when the iLac began to play the annoyingly peppy tune that meant she was getting a call. Aeluri put her face into her pillow and screamed, then leapt up and made her way across the room to the fallen iLac. The floor was cold, which only soured her mood even more. She picked up the device and swiped to answer the call.

“CAN’T YOU LET A WOMAN SLEEP? GOD DAMN. WHAT THE FUCK DO YOU WANT,” Aeluri snapped.

“O-oh, Ms. Atra, I apologize for waking you,” came a voice from the other end, a lot less grating to her ears than Louie’s was. It was his assistant.

“William?” she asked, tilting her head. Louie’s assistant was much kinder than he, and Aeluri much preferred when he called. It had been a while since either had called her, though. “What is it?” While her voice was still snarky, it was at a much lower volume than before.

“Mr. Klein would like you to meet him at the usual restaurant. He has business to discuss with you.” Aeluri rolled her eyes. William was being as vague as ever. No matter how many times she asked, he refused to share the details.

Not too long afterwards, Aeluri found herself walking down the familiar street that led to her usual meeting place with Louie. It was a sunny day, which she paid no mind to. The early wake up had put her in a sour mood and her only focus was on giving Louie a piece of her mind. She wanted nothing more than to punch his smug little face the moment she saw him. How dare he wake her from precious slumber yet again?

As she entered the restaurant, that goal was forgotten. She could smell his sharp cologne instantly, but the golden head of hair was nowhere to be seen. Aeluri narrowed her eyes and traced the scent to a nearby table. A man sat there, staring out the window. It was definitely Louie based on his jewelry, but his appearance had changed. He now donned silvery locks and black markings along his body. Not to mention that he was much more pale, as if he had laid off of fake tanning for a while.

Aeluri approached and slumped down in a chair eyeing Louie with a raised eyebrow. Her curiosity was piqued, drowning out her irateness ever so slightly. “What the hell did you do to yourself? Are you having a midlife crisis? You look like an old man with that gray hair,” she jabbed, hoping to get on his nerves.
@Louie
IVYLEAF33