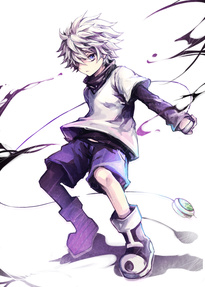 Magic Type: (Ancient magic)
Description: (Fusion magic is a magic used to mix two different magic styles with the users primary magic. To do this the user has to either absorb or consume another magi(or item or even body, basically anything apart from inanimate objects) this will combine with their own magic to create a stronger type of magic or even a new one. To combine magics the user needs to know how to use the new magic. If they don't this can lead to a horrific toll on their bodies such as poisoning them or even permanent damage. The main issue with this magic is the fact the user has to have some experience with whatever their fusing with or they will get really badly hurt.The primary magic for this magic is thunder magic. )
Unique Abilities: ( Body Fusion: this ability will fuse the users magic with their body powering it beyond its normal limits. The boost include the following- 80% boost in strength, 90% boost in speed and a magic aura that absorbs 5% of damage. However the setbacks are: They can't use any long/close range magic, Each attack does 4% of damage to the user and it depletes MP 1.25% more per attack. This ability can be activated on will. )
[*]Ability:
[/list]