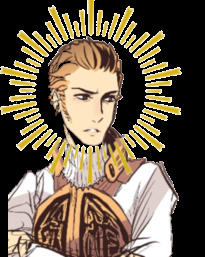 There were a handful of things that attracted Ezekiel to this job specifically. Primarily, of course, was to help the people living in Hargeon Town. According to a few council members, there was a growing fear that the sea monster responsible for initially destroying the town will return, though much stronger this time. Ezekiel had handled monsters before, or at least small hog-creatures that threatened Cedar every now and then, and figured ‘how much trouble can a sea monster be?’ Though, another detail that caught Ezekiel’s attention was the reward; a magic rifle claimed to be blessed by the mythical hunter Orion. Ezekiel immediately took the job on, wanting the weapon all to himself. He was genuinely interested in protecting the town, but honestly didn’t know where to start, or if he would even need to start.

But, he set down to the beach to begin tracking, or at least trying to track the creature. Albeit more difficult than tracking land animals, it was not impossible to follow. For Ezekiel at least, it was comparable to wayfinding. He began at the beach, and felt the long scratch marks in the sandstone. He eyed the scratch marks on the walls of the city, too, and noticed the uncanny resemblance. They were long, deep and thin, as if something had whipped with a sharp flail. While the marks in the sandstone were considerably new in comparison to the marks on the walls, they were undoubtedly caused by the same or similar creatures. The problem was, Ezekiel didn’t know exactly what the creature was. It was without a shadow of doubt enormous, and as Ezekiel wandered farther down the beach, he discovered the mast of a ship sticking jutting out of the water. The water was fairly clear, and upon closer inspection, Ezekiel could see a crater in the side of its hull. The metal had been dented by something the size of a boulder and lacerated. Though, what caught Ezekiel’s eye was the difference in size of the scratch marks of this wreckage and that of the sandstone. This creature was much smaller, but still quite similar to the other.

As Ezekiel crouched over the surface of the water, squinting to get a better look, he realized he wasn’t alone on the beach. An older woman dressed in nautical garbs came across the young knight and spoke over the sea breeze. “Think you can fish my ship out of the water?” she asked, voice distinctly accented like that of a pirate’s. “There was a mighty big thing that came and rammed it just as I was about to set sail yesterday.”

“Aye,” he replied. “I might be able to get some of it out, but I’ll be foostering if I try to save it whole.”

“Too bad,” she replied. “I did see the creature though, just as it was making its escape. It headed about due east, some mileage away.”

“Any chance it will be back?” Ezekiel asked.

“I reckon so. It’s probably after the other fishing boats with fresh catches. As of right now, everyone’s stopped fishing indefinitely, or until the creature gets bored and moves onto a new hunting ground.”

The sailor scratched her head and rubbed her chin in thought. “No, not really. It was pretty dark, and the creature had black skin and tentacles like a whip. But I couldn’t see a face, or eyes for that matter.”

Ezekiel stood and stretched, subsequently revealing his guild mark. “Well, I think I might be able to help.”

“You’re awfully young to be joinin’ that guild, aren’t ya? A creature like this might kill you, you know?”

“I...I’m aware,” Ezekiel gulped. “Say, you reckon the creature only comes out at night?”

“I believe so. Do you plan on hunting it?”

“Possibly lure it out, but I’m going to need a fresh catch first,” he explained.

The sailor chuckled. “I’ve got a small schooner and a hankering to kill the beast, so it seems you and I might be able to help each other.”

Ezekiel and the sailor met again on the pier as the sun was setting.  The night was still fairly warm and humid, and the sharp moonlight cast its gaze on the water and illuminated the bay.  The two brought only a dim lantern to hang from the mast and a large net to throw overboard.  Ezekiel smiled and helped the woman to catch a half-full net of fish, and leave it to rest just above the sea floor, making pleasant small talk as they awaited the creature’s arrival.  He left the Atrophie Bow and its quiver on the deck, and quietly twiddled his thumbs in wait.  The fish stirred in the net, but suddenly all shifted to one side and rocked the schooner.  “I believe our guest has arrived,” Ezekiel guessed, and peered down at the net.  The fist were crowded against the edge of the net, as if trying to escape a larger threat.  Then an inky black mass followed and devoured the catch, net and all disappearing into the void of its mouth.  The boat rocked forcefully, knocking him off balance, and the creature breached the water and struck the schooner with its head.

Recently, Ezekiel had gained somewhat better control over his magic, able to cast with more ease.  He lit the water up with his ecto-beams, firing jets of neon-green fluid that stuck to the water.  Once he saw the beast, he struck it on its head with an ecto-beam so as to mark it so he could see it in the dark water.  It was much smaller than he previously believed, but terrifying nonetheless. He could only describe it as a black jellyfish, with razor sharp tentacles and a near invisible mouth lined with jagged, needle-like teeth.  Ezekiel leapt onto the water and began to sing the Song of the Selkie, drifting over the water atop an enchanted current.  The creature followed him with great speed, but gradually slowed and lulled to sleep.  It was almost too easy of a battle; Ezekiel retrieved his bow as the creature slept and put it out of its misery.

Though, shortly after he loosed the arrow, he felt something else stir in the water.  The creature sank to the bottom of the harbor, lifeless and still, but something exponentially larger was swimming towards him.  He quietly sang to himself, preparing to retaliate at whatever was coming his way.  The water rippled around him, under his influence.

“Look out!” the sailor cried, but it was much too late.  Another of these creatures breached from beneath his feet and threw him up into the air.  Ezekiel briefly lost control, but maintained his song.  The creature awaited him with an open maw, but was chained by a muzzle of water per the Pull of Gealach.  Ezekiel summoned a tide underfoot and tried to lock the creature in a bubble, but its tentacles slipped through his control and lashed out at him.  He deflected the strikes with water, but a stray tentacle sliced through his cheek, sending immense pain throughout his body.  He screamed and lost control of the water, sinking into the bay.  His blood clouded around him, but was somewhat relieved as he used the Tidal Touch to partially heal himself.  The creature’s tentacles encircled him, and he sprayed ecto-beams in all directions to see better in the twilight.  The water was cold and murky, but also silent except for the swish of the creature around him.  Ezekiel held his breath for a while, and did his best to swim up to the surface.  But, a sharp, wire-like whip wrapped around his ankle, sending pain throughout his leg and radiating to the rest of his body.  He screamed his last breath into the water, but another voice called to him.

Sing, the water seemed to whisper, sing for me!  As Ezekiel slowly faded out of consciousness, the Abyss murmured to him, and he listened.  A whistle-like tone escaped him, and rang throughout the water.  He rose to the surface, semi-conscious, and two ghostly heads formed around him.  The creature rose with him, dazed and afraid.  Ezekiel locked eyes with its smooth head and continued to sing the Siren Song.  His eyes shifted from green to bright neon purple, and he felt the magic and very life force of the creature slipping away, into him.  It was enthralling, using the spells from the depths, but fear built up inside Ezekiel.  He couldn’t stop the spell until it was over, and it was long from over.  The creature’s life force drained and left it withered, on a thin tether of life.  It tried to escape Ezekiel, weakly swimming away, and the boy let it.  He weakly sang a sea shanty in return, bringing himself back to shore in a tide.  His throat was sore and hot from singing and inhaling seawater, but most of all, he was tired.  Never had he used his magic in such a manner before, and he was both thrilled and terrified.