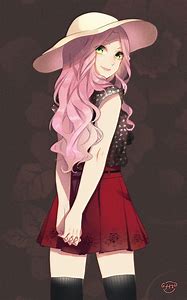 Luna was walking down the path with Neptuna in hand. Luna was dressed in her more casual attire, Neptuna was in her humanoid form wearing a simple white dress and sandals. They had just completed a job eliminating a minor dark guild, consisting of weak wizards out of a town they were occupying recently. While it wasn't a difficult job, it was taxing to do consistingly play defense and offensive against twenty wizards constantly holding hostages. In the aftermath, Zygmunt, Luna's twin blades were covered in a hard to clean formula, and one of Amelia's Lacrima needed replacing so she took Zygmunt to get treated and replace her lacrima at the same time. Since the original plan was to go in a different direction, Amelia had told Luna that she would catch up with the two later.

Neptuna looked around, excited looking at the forest and the various wild life.
"Mommy look! A bear!" Luna looked over at the bear, and waved at it. The bear, grunted back. "I was just thrown out by my mate, I don't :want to deal with another woman." Luna heard the bear, but Neptuna lacked the same communing ability. "What did he say?"

Luna started to move away at a quick pace and Neptuna kept up. "That bear did not want any company at the moment, like he really did not want to talk." A few minutes later, Neptuna's stomach began to growl. She tugged on Luna's hand, who was already well aware of the noise. "Momma, I am hungry." Luna looked over at the trees, calling out to them. "Any one of you fruit bearing?"

Luna rested her hand on a tree, and she was in telepathic link with most of the forest, and one answered. "I am! I'm right by the path down the road." Luna nodded and she walked further, and she found the apple tree, however all the fruit was very high. Luna slowly picked up Neptuna, and tried to raise her high as she could. "Can you reach?" Neptuna tried, but her fingers where still inches way from touching the fruit. "Sorry, I don't think I can..." She replied sad. Luna slowly put down Neptuna, and smiled. "Don't worry, there is another way."

Luna gently raised her fingers before she gently lowered them slowly, meanwhile the tree branch started to extend and lower itself in sync with the motion, until the branch was barely a foot over Luna and she then picked a apple and handed it to Neptuna. "Thank you momma." She said before she took a bite out of the large red apple.

Meanwhile unbeknownst to her at the time, she was being watched from a distance, by a man who ran up to the two. His torn and tattered uniform was a law enforcement uniform, he was covered in wounds and clearly exhausted as he fell to a knee before Luna. "Please... I am looking for... great heroes... My town... needs to be saved." He cried out loudly with exhaustion.