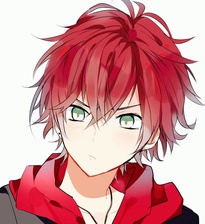 Walking through the streets of Magnolia Town, Erebus had wondered if he might've taken a wrong turn somewhere. According to the directions upon taking the job, there should've been a potion shop near where he was standing. Upon further inspection, he found a smaller than average building cramped between two other shops with the name "Edelburn's Wondrous Concoctions" written on on a swinging sign. Stepping inside he was greeted by the sight of a thin man covered in strange fluids of varying colors, looking akin to that of a painter who was far too into his work.

"Ah, welcome! Welcome! Just excuse me for a moment and I'll be right with you!" he said, running off before returning in a new set of clothes. Clearing his throat he continued "Uh...you wouldn't happen to have a certain tattoo would you?"

Erebus simply nodded and revealed his guild mark to the shopkeeper before being guided down a lower floor, revealing a sizable laboratory with ingredients and potions of all kinds around the room with a large cauldron, boiling the man's latest experiment. After putting on a protective apron, the man introduced himself as Felix Edelburn, self proclaimed master alchemist and potion maker.

"So the wolves of Phoenix Mountain have another member interested in the more subtle arts eh? Well this is a good place to start! Tell me, how much do you know about alchemy?" he said as he prepared a few beakers for use.

"Nothing much apart from reading a book on the basics."

"Ah, so you know the fundamentals then, good! The further you delve, the more interesting things you may find out about the world around you, such as I have! Nowadays people seem rely a little too much on magic. Granted I had...a bit of an interest a few years ago, but I lost that interest in order to perfect my craft."

Before Erebus had known it, Edelburn had placed several ingredients on the table and took a few steps back. "Now, my boy, as the job description said, your task is to help me create something new to sell in my shop. Simply take a few ingredients, mash them up and see what you get. And if you fail, there are a plethora of other things to mix. It's all part of the fun! Well assuming you don't blow your face off in the process.

Somewhat nervous at the last sentence he heard, Erebus began his work. Grinding, mixing and stirring with a general idea of what he wanted to make. He even used a book that cataloged some of the plants and fungi he was using to check that he was using the proper ones. "Huh...do you think you could make a magic out of it?" he said, pouring his creation into a bottle.

"Out of what? Alchemy? Well...in theory I suppose you could. Then again someone could probably base a magic around ticks or flies if they wanted to. I'll give magic one thing, it's versatile and surprising. Just when I thought I'd heard it all, there was always something new being made or used in a different way. But sadly it seems that it's all people care about now. Nobody has respect for the less flashy forms of magic. But no matter, the art still goes on in some way or another."

The man's words had managed to bring out a bit of pity in Erebus, while he had a love for magic and all of the magnificent things it could do, he couldn't help but feel sad about Edelburn's situation. He couldn't imagine what life would be like if people weren't as into magic as they were. He couldn't imagine much of an interesting world without it, to be honest. Though it did give him an idea. Maybe he could make a synthesis of some kind. A synthesis between magic and the art of alchemy.

But while he was lost in thought, he miscounted a measurement and nearly received a mass of strange chemicals and broken glass to his face if he didn't stop himself! With a sigh of relief from him and Edelburn, he gave the potion maker his concoction. "So what'd you make?" he said, looking it over.

"Well I was going to make an antidote of some kind, buuuut I sort of changed my mind halfway through, changing the ingredients I was using to make a type of non toxic dye for water. Like if you wanted to make others think you were drinking something else for some reason."

"Hmmm interesting enough, I guess. Lets give it a try!" Edelburn exclaimed before putting a few drops of this unknown creation into a glass of water. Within seconds, it spread throughout the glass, turning the water into a bright purple with a subtle and very soft glow to it. Raising a curious yet cautious brow, Edelburn took a sip of it before grimacing. "Ugh! Well you definitely made an antidote, that's for sure. I'd recognize that brand of bitter taste anywhere! Usually antidotes are general purpose and used to treat common sicknesses like the cold or the flu. Given enough time, I suppose I could do something about the taste. Possibly flavor it to be something akin to grapes or strawberries. Maybe find a way to change the color? Oh well, in any case, you can be on your way. I'll send a notice and your payment to your guild's hall. I've got some work to do!"

With a focused look on his face, Edelburn could be heard from just the entrance of his shop, toiling to perfect the new potion Erebus had helped him create. While it might not have been a success at first, it could be turned into something that could legitimately help Magnolia Town in at least a small way. With a smile and a copy of a recipe to see if he could do anything new with his creation, Erebus would use his guild tattoo to return to the hall with yet another job completed and yearning to create the synthesis between the two arts that he desired.
« View previous topic · View next topic »