Eyes of the Ocean Eyes of the Ocean

Ash laid down against the soft, white sand that lined the crescent beach of Hargeon Town, his sapphire-blue scarf draped over his eyes to protect them from the scorching death beams the sun continued to insist on firing down on him. If it weren't for the long, white trench coat he wore, his skin would be seared and blackened by this point.

Okay, maybe that was a bit of an exaggeration. For a boy as pale as Ash, however, it was a perfectly logical worry as sunburn killed like a bitch. Despite this, he still enjoyed being out in the sun as long as he was protected by some degree from the deadly golden gaze in the heavens above. Many would call him crazy for wearing wintry clothes in the middle of the beach, surrounded by hot sand and hot sun... he called it survival.

Sliding the scarf back down to his neck, he sat up and scanned the blue horizon - blue like his own eyes, blue like his hair. Many related his eyes to pools of ocean, and his hair to a blazing hot fire, a perfect match to his determined personality. It was ironic, really, considering his magic. He stood and strode over towards the shore, where the salty ripples lapped lazily at the damp sand, which dried almost as fast as the ocean could soak it. Dipping one shoe into the water, Ash let a blue flame flicker down his trouser leg and to his foot. The water that washed up around the sole of his shoe froze on contact, before briskly melting away back to where it came from.

"Where are you, Phoenix?" he muttered to himself and looked to the sky. He knew so little about his heritage, and that dream was all he had to go on. If he could just find the creature who spoke to him in his dream and revealed to him his magic abilities, maybe he could unlock the potential of his Phoenix lineage and discover who he really was, where he belonged.

Turning from the waves and sky all at once, he ran his eyes along the beach before him. It was dotted with small groups of people, and even some individuals just lounging about and enjoying their time off, whether it be from mundane, magic-less work or their guild jobs. It was beautiful, really, how everyone, magical and not, could walk among each other without fear and without pride. The wizards were humble, and the non-magical public held nothing but encouragement.

Okay, maybe that was more exaggeration. There were small groups and cults who despised wizards, but this was not without its counterpart within the wizarding community; dark guilds all held their power in high regard and wielded it over the heads of the public like a flaming torch that cast shadows on everything it touched.

Ash clenched his fist and sighed. How someone could stoop to that level he will never understand. But he felt it was his responsibility to help beat evil back into its ugly cave and seal it shut with justice. 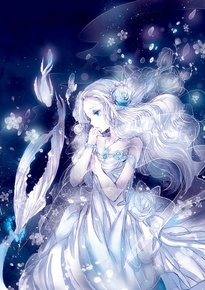 Aria was sitting in the midst of a small group of ordinary mages, her chilly aura giving a welcomed breeze of cold every so often. Originally, she had willingly sat off to the side of the groups and pairs of people, opting to set up an umbrella, and using glacier shot to make a divot of ice in the sand, and ultimately attracting a few mages, as well as a few ordinary folk, that wanted to bask in the cold aura the magic was giving off. Aria had simply just ignored them, taking out a book and reading rather than pursuing conversation. 'It's too boring, I guess... I'd much prefer something quieter than this.' Aria sighed, and put her book down, before leaving her Ice hole, and pulled her coat over her clothes. The sun was always as bright as ever here... Hargeon, one of the first major towns that she had visited aside from Magnolia town. Aria had stuck a few pieces of ice into her jacket, keeping herself cool even with the heat.

Aria noticed another person dressed in winter clothing that was almost all black (a bit like herself, oddly enough), with a blue scarf tied around his throat. He had dark blue hair, and eyes that reminded her a bit of a precious gemstone she had seen once. 'I can't remember what the thing was called though... Oh! It was called a Sapphire! I loved the sight of that gem~' The person appeared to be male, and had the same glow of Ethernano that most mages seemed to have. It seemed like he didn't like the sun. Aria simply watched him for a moment, before taking off her boots, and rolling up her pants' legs to walk barefoot in the edge of the water, the waves lapping up over her ankles. Aria took a deep breath, enjoying the smell of the salty sea. "I... I love this.... It's so.... pretty!" she gasped, taking in the beautifully gleaming ocean, the tips of the waves being painted an icy white and silvery blue, with the occasional seafoam dying it a pale blue green.
_____________________________________________________________________________________
One tends to forget about faries, after all, they seem weak right?
One couldn't be any more wrong. They can become a terrifying nightmare.
Basking in the cold of snow...

Ash hadn't noticed the girl peering at him and admiring his sapphire eyes, until she had spoken up at the space where the ocean met the water in a beautiful marriage, the white froth of the twinkling ripples softly pawing at the sand. "Oh, hey there!" Ashtver called out to her and turned back around, walking up to stand beside her, staring back out towards the horizon as he had been not a moment ago. Being so close to her, he could sense the Ethernano that ran through her body, the same essence that powered Ash's own magic. "It really is pretty... you don't notice it until you really take a moment and let it all sink in, hey?" he agreed with a wide grin.

"Hello." Aria said, turning to face the one who had spoken to her, apparently the boy who she had been admiring just moment's prior, was looking at her with a neutral expression... and was standing just a few feet away. he made a note about her talking about the ocean, which she simply responded with a nod. It was something that wasn't necessary to talk about out loud, as she had already acknowledged the beauty of it prior to his statement.

This girl who had moments ago been entranced by the ocean and obviously bright and happy had suddenly taken on a much more morbid persona, as if something Ash had done or said had triggered some dark version of her... or torn away a fake mask. Whichever one it was, Ash wasn't certain, but the sudden shift in her tone sent a shiver down the boy's spine. He forced a somewhat awkward smile as he attempted to soothe her and get on this girl's good side. He had a feeling he wouldn't like to be on the front cover of her bad book. "W-why aren't you in a guild?" he stuttered, tilting his head in genuine curiosity. "Not something that catches your attention hey?" He was trying his hardest to maintain a conversation and his nervous smile all at the same time.


He averted his eyes to gaze along the cityscape of Hargeon, eventually laying them on the lighthouse, which flashed across the beach every few seconds, a searchlight to guide the ships safely home. Ash sighed and stared at the sand. He came out so far from Clover Town to become that searchlight that could ward evil away, and here he was talking to a random girl on a beach that obviously took an immediate disliking to him, when he instead could be training and searching for the secret to his Phoenix powers. Would she really be proud of him? This wasn't what she'd sent him off to do...