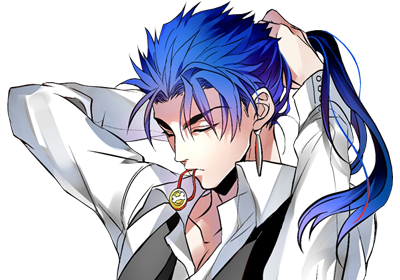 The day was nearly over, the hour reaching nine-thirty. The lights that hung beside the doorways of many different buildings would shine their last lights as men and women flickered them into darkness. Small business owners flipped their "open" signs to "closed," while young children were tucked snugly into the beds by loving mothers. It seemed at this hour, all things would shut down and slumber. That is, all things except bars and Rose Garden's Foreign Travel Center.

As of late, Oyama found himself splurging far too often for his wallet to remain filled, and would need to do jobs in order to have it return to its original state. Most of what he had before was converted from foreign currency, anyway. Regardless, he was adamant that he would feel most comfortable in knowing he'd be able to do jobs away from Fiore. Really, it helped him feel secure.

Ambling under the jade black night sky, overcast with clouds, the robed Oyama made way in the seemingly empty Foreign Travel Center. Glass doors would slide open as free, white feet stepped onto its cold tile and over to the desk with an idle woman. She had her back turned towards him, packing up her things from what it looked like. Quietly, Oyama still approached the desk with a neatly organized stack of papers on top of it.

"Hey," he announced in his usual deep, silvery voice, "I can get a passport here, right?" he queried, tapping the wooden desk. The woman would turn to face him with wide, hazel eyes. She looked shocked and startled, looking up at him.

"Sir, we're closed. Please come back tomorrow. . ." she would explain, pointing to the clock just behind her.

Oyama's ruby hues would squint in irritation in response to her explanation, "Closed my ass. You don't head home for another six minutes, and this will only take less than one. Now hand me a pen," he challenged, extending his hand out so that she could give him the writing utensil, and so she did, "Just fill it out here, right? Aye?" he queried, only to fill out the information before being given an answer.

He ripped the sheet from the clipboard and placed it in the hands of the fussy woman, who would then review the answers and print him his passport. Snatching it from her delicate fingers, Oyama scoffed and made way to the exit. But before white hands could push the glass doors open, he turned. "Lose some weight, why don't 'cha? Maybe if you work overtime, you'll be able to afford a new diet. Cow!" he grumbled. Boorish he was, indeed. He didn't need to look back at the woman again to feel her unadulterated contempt radiate from her space, but regardless, he strolled out like he strolled in.

Stepping out into the chilly Rose Garden air, he pulled his fresh identification from his pocket. The wonders of magic truly were wonders, as it had all of his information scripted in just by him filling out a paper. He was no stranger to the art, but it fascinated him still.