Job Description:
You've been contracted to take down an extremely dangerous man.
The city guard has no information on him, and no one has come back alive.
All they know is that he's hiding in a mine shaft, and has a lot of dynamite...
Get to it!
Enemies:
Weak:Exploding Spider
Surprise! BANG! These spiders creep up behind you and jump at you. Be warned, they deal 10% damage, and explode the second they're within slashing distance. You're gonna need at least a D ranked distance spell to not get slammed. Oh, and they're wicked fast.

Normal:Demolition Slave
These fellows take 5 C rank hits to go down, and will throw dynamite at you. They're not too bright, so more likely they'll run at you with a chest full of boom sticks.

Strong:Mine Field
You've come across a very well placed field of land mines! They're super sensitive and will go off if someone is within 15 meters of it. A single explosion will set off the rest of them, which will deal A ranked damage to you. There's also 20 mines, so good luck...

Boss:Demolitions Expert
As it turns out, he's more than an expert... Explosions are his primary magic. He can cause the air around you to explode dealing B ranked damage. It will take 10 hits of B ranked damage to put him down. After you defeat him, roll a damage dice. If you miss then that means your character didn't kill him.

It was a busy day for Kaori so far. In the morning she had gone to the docks to check on her ship and crew, as well as bring them something to eat. After that she went out to get a few items for her room, and meet with a couple people to talk business. Then she had paid Gisen a visit to see if she was alright. Kaori had taken a liking to the clan leader, so she often visited her in her office to have small talks. On her way back into the guild, Kaori had come across a wanted poster on the notice board for someone who was holed up in a deserted mine. Kaori had been wanting to find some task to use as an excuse to meet more people in the guild, and this seemed to be something that would suffice.

Kaori looked around, trying to find someone she hadn't met, or smacked with a book before. She saw a boy who she hadn't seen before, one who was probably new to the castle. "Yo!" she called to him and waved to the boy. Suddenly she'd vanish from his sight and reappear a couple feet from him with the contract in hand. "I'm going out on a job and need someone to help me out. It's a bit risky but nothing life threatening, I just don't like traveling alone. Would you come with me?" she asked, holding the job notice out towards Dante. She didn't know his name, and she'd never met him so he likely didn't know hers. The guy would notice that Kaori was wearing a mask in the shape of a cat's face, and very high-profile clothes for someone who was an assassin. The mask muffled her voice since it lacked a mouth, or a hole for one at least; which made it sound like Kaori was talking through a door or something. She sounded enthusiastic though, something that masked strangers rarely were like. Normally they were broody, dark, edge lords who were so edgey you could get cut from their presence alone.

The mission was to take on some guy who was blowing people up left and right. He was dangerous, and the Rune Knights couldn't take him on so they asked for wizards from magic user clans to help out. The order was to take him back dead or alive, preferably alive. Kaori intended to ask him the reason behind his actions and judge him by that, so he wouldn't be immediately beheaded by her.

enemies:
○Kaori carried out 1 launched of one Monster Dice : 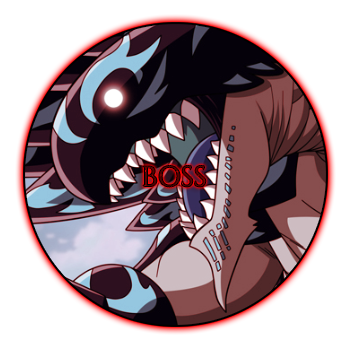 One job down and another to go. Dante just got back from getting his passport when he had entered the castle.  As normal the castle seemed quite with people out on jobs or people just staring at the board. He was going to head out to the board and pick a new job afte rhe got some food. He would go to the bar and order somthing that the guild only had bacuse of him Nightshade  Monkshood Shake.  The bar tender would hand it to him and charge him 2,000 jewels for it like normal. For he had to keep it kinda low and they charged so much for it cause of how deadly the drink is. This drink would normally kill the adverage person. Being a god he had some immunity to it since he gets stronger by eating or drinking the most poisonous things in the world.

Dante needed to get a job so he can have more jewels to help resupply the poisonus plants to keep his drinks ready and his food even better. Dante was about to go through the castle to head towards the job board. And there it was. A woman who would get his attention as he took a drink from his shake. He would blink only for her to disappear and reappeara couple feet away from him. He would take a deep breath in as he would gain her scent. This woman already had a job picked and that was one he could not help to get on. " Sure why not. I was on my way to the Job board anyway." He would now drink it all down quickly. " What ever you do do not ever order this drink" he would say feeling his magic power fully restored.


Dante wanted this job more then anything and since his magic needed the help of another type of person since he had to learn more of what this ones magic was. She was quick he would give her that and that would difinitly give him what he was needing to be able to support her and give her the back up that is needed. " Lets get going". he woudl turn and start to head back to the door as he would look back at her. He really did not care either way but he was a new person in the guild and had to do something. He had a lot to prove to this new family when it came to not only his usefulness but as a mage. He has to learn how quickly his own power is as well as this new life as a god slayer.

When the man said that he'd come along, Kaori let out an excited squeal before moving forward and wrapping her arms around him. "Thank you!" she shouted enthusiastically, holding the hug for a second or two longer before releasing and backing away. She noticed that he had a drink in his hands, and from the smell of it the beverage was something no average human could take. She watched him chug it down before warning her to never order it. Kaori's reply was one of logic. She replied by asking "Why wouldn't I order it? I could easily kill ten men with just a couple drops of that." The drink was almost pure poison, something Kaori could smell even from her distance. From the aroma, she suspected it had some nightshade in it; a berry that can cause a number of horrible side effects including death.

Kaori saw the new guy heading to the guild doors to leave, and she herself went over to the side and grabbed her motorcycle. Mounting it, Kaori pressed her hand to the scanner on the side and turned it on, revving the engine a couple times. She then rolled up to Dante and paused. "By the way, I'm Kaori. If you want you can ride with me, or use your own transportation; whichever you prefer." Kaori said with a soft, gentle, and friendly tone that was muffled by her cat like mask. If Dante chose to get on with Kaori, he'd notice the trip to Crocus would only take a couple hours. The motorcycle didn't run off of a traditional combustion engine, but rather nuclear fusion. The energy produced allowed for less moving parts, and more speed. The bike was able to move at over a hundred fifty miles per hour and still not be going at max speed.

If Dante decided to not use Kaori's motorcycle, he would find her waiting just outside the main guard station. Her kit included a bow that she had around her body, a katana at her waist, and a tool belt around her hips that housed a number of items. One her back was a pair of explosive charges, and below that was a pair of cylinders with a gamma radiation warning symbol on the side. If he had come with Kaori on the bike, he would've seen her removing the fusion cores from it and attaching them to the clasp. Either way, Kaori would tell him "We need to tell the head guard to pull his men out. I'd rather not have them getting in our way." with a serious tone.