The Smol Maid at the Cosplay Café 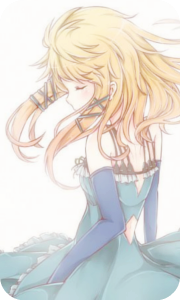 The Smol Maid at the Cosplay Café

Ursala sat inside the Cosplay Café. A friend had recommended it to her saying they had great entertainment, but this is not what she imagined when he said entertainment. "Pervert." She muttered towards them, even though they weren't presently any where near her. She wasn't to keen on the idea of staying there, but she was starving. She ultimately decided she would eat there. She ordered the yummiest looking thing she could find on the menu, and ate it quickly once it arrived. All the waitresses were rather nice to her, which made the experience a little better. One of the maids brought her the bill, and Ursala checked her pockets. While rifling through her pockets she managed to get enough to pay half the bill, but not all of it. When the maid came back to take the bill she noticed there wasn't enough money. "Ma'am you still owe some." Ursala shrugged, and looked at her blankly. "Don't have it." The maid gave her a slightly irritaited look. "Then you must work it off. If you work it off you'll be able to get a little bit extra, and that's not even including tips. With tips you could get a good amount of money." Ursala didn't normally care if she paid for things or not, but this idea sounded kind of fun. Plus, it would get her some extra money too. "Okay." The maid's face returned to a smile. "Then follow me please!" Ursala stood up, and followed the maid to the back, where there was multiple racks of almost every cosplay imaginable.

Ursala rifled through the costumes not sure which to choose. There was just to many choices, but eventually she narrowed it down to a neko maid, and a regular maid. She considered the regular maid, but ultimately chose the neko maid. It was a maid dress, a head band with cat ears attached, and a belt with a tail attached. Ursala entered a dressing room, and quickly changed. She folded her actual clothes, and placed them in a small locker the workers could use.  After getting everything on, and putting all her things away she walked out into the café ready to  take orders.

Immidiantly when she walked out to the booths a group of teenage boys called her over. "Do you have a name, or can I just call you mine?" Ursala froze for a moment, not expecting a pick up line. Thinking a moment she knew exactly how to respond. On most occasions her face was rather blank, and expressionless, but it's fun to act sometimes. Ursala gave them a miscevious smile, and replied. "Actually, I'm Ursala. I was feeling a little off today, but you definitely turned me on." The boy's face turned bright red, and he turned away trying no to show it. Ursala smiled,and continued. "Now what can I get you all to eat?"  The other two boys bursted out laughing at the embarrased one, and laughed for a minute before ordering. "We'll take the cheapest thing you've got, three of them." Ursala's face returned to it's normal solemn look as she nodded, and walked away to place the order.

The kitchen seemed like a fun work area. Even the chefs at the cafe were wearing costumes. Ursala would've rather help out in he kitchen, but if she cooked there's no doubt people would be going home with food poisoning. She left a piece of paper on the order rack stating the boy's order. When she walked back out she heard one of the boys call her over once again. "For a moment I thought I had died and gone to heaven. Now I see that I am very much alive, and heaven has been brought to me." This time one of the boys winked at her while talking. "I see. So one of you has decided to challenged me then?" The boys all looked at her with extreme confusion. "What?" One of them asked. Ursala stood right beside the one that flirted with her, and knelt down to be on his level. Her face once again showed a smirk as she spoke.

"There isn't a word in the dictionary for how good you look." The boy's face blushed slightly, but he kept his cool. "I was wondering if you had an extra heart mine seems to have been stolen" Ursala couldn't help, but enjoy this. She wasn't actually interested in the boy; she just wanted to beat him at his own game. "Baby, if you were words on a page, you'd be what they call fine print!" The boy stood up now understanding this was a challenge, and not actual flirting. "Babe, your beauty makes the morning sun look like the dull glimmer of the moon." He smirked back at Ursala thinking he had gotten the better of her. "Are you a banana? Because I find you a-peeling" Ursala kept her cool while speaking, but this time the boy would slowly get louder until it was almost a shout. "You're so beautiful that you made me forget my pickup line!" Ursala retalated with the final blow. "My doctor says I'm lacking Vitamin U. Have you been to the doctor lately? Cause I think you're lacking some Vitamin Me. If I’m vinegar, then you must be baking soda. Because you make me feel all bubbly inside!You must be the cure for Alzheimer’s, because you’re unforgettable." Ursala watched the boy become confused with her flurry of pick up line, and she finished it with one last blow. "You know I'd like to invite you over, but I'm afraid you're so hot that you'll skyrocket my air-conditioning bill." Ursala could tell she had won. The boys face was red with humilation, and he sat back down turning away from her.