The Cosplay Cafe was not a job that Celestia would have chosen for herself. It has been suggested to her by the Guildmaster and begrudgingly she had taken the job if only to get some coin. She had treated herself to a costume from a popular book series. It was fairly complimentary to her figure so didn't mind too much that it was a tad revealing. The cafe was fairly small but constantly bustling with energy, it was no surprise that the Cafe was looking for help! Celestia came out from the changing area, attempting to make the small areas of fabric cover what it could, to no avail.

"Ah, you made it out in one piece I see, oh, and don't you look fantastic!" The shopkeeper was a younger lady who was dressed as a Neko. A nice enough lady who was frantically making as many hot drinks as she could. There were four tables that were currently taken in the small place and it was Celestia's job to serve them. The first table didn't seem too bad. A group of three teenagers all sat around a small circular table. The three girls were chatting among themselves until Celestia approached with a notepad and pen in hand.

"Oh well look at this cheeky thing." One of the girls chimed up as the other two lowered their menus, their eyes fixing on Celestia. "Hi girls, can I take your orders?" Celestia brokered a smile. "I'll take a tall glass of you..." One of the girls mused with a little bite of her lip. Celestia blushed slightly at the comment, but, held her composure, simply clearing her throat. "You can always take some weight off over here if you like?" Another giggled. The third opened her mouth but the look Celestia gave quickly silenced her. "I think just three pumpkin lattes would be great thanks!" The third girl murmured. Celestia scribbled down the order, collected the menus, and headed back to the bar.

After a few minutes, the drinks were ordered and Celestia delivered them with only a purr from one girl and a wink from another. A hand waved in the air from another table and Celestia made her way hoping for a more considerate customer.

The children who were sat there were young, so young that Celestia looked around for their minder. Yes, they were around ten but children they still were. "You kids okay?" The Dragon Slayer bent over, bringing herself down to their level. "Uh-huh!" One of the children grinned. There was no chance of questioning them as there an immediate exclamation of hot chocolate. Clear, concise. Celestia's kind of customer. A quick dash to the counter and four piping hot chocolates were set in front of them.  The kids all dug deep into their pockets, offering a pool of lint, buttons and finally coins for their beverages. Their eyes glistened with such delight it brought a smile to the Slayer's face. That smile was quickly going to disappear.

"Oh miss, your outfit is to die for!" A gentleman exclaimed. "It's more than that, it's a seriously good cosplay of Demon Queen Milli! I'm very impressed!" Not a word could leave Celestia's mouth before cameras were out and pictures were being taken.

The requests and compliments kept coming. "Sorry guys but I really need to get you something as there are other customers waiting to be served." The Slayer was slowly beginning to get agitated by the pair. One photo was fair, or not so, as they had not bothered to ask if it was okay to take her photo. A snap of fingers perked Celestia's ears.

"Come to me, my little sparrow!" Tucked away in a booth was some guy. His belly spilled out over his pants and onto the table itself. He was clean-shaven but there was an area he had not shaved, leaving a horrendous patch mustache. Spiney then glasses clung just barely to the grease on his face and nose and his hair cascaded down his shoulders. On the table in front of him lay two lacrima tablets as well as a collection of cards. This was the moment felt a cold chill run down her spine. The sane feeling she would get when Mura was on one of his Pervy rages. "Oh... not one of you, please." She was almost to the point of wishing for a training session with Vandrad if it meant not speaking to the guy.

"What can I do for you, sir?" Celestia forced the best smile that she could. "Oh, you look just like one of my beloved characters. I have her card you know, GRADED." He put a great deal of emphasis on that word. She looked over at the counter as the manager looked back with a sense of sympathy. "Would you take my order Milli, otherwise I may be forced to make you?" He licked his lips slightly and Celestia felt physically sick. "Sure..." Celestia forced out. "I'll take something hot and wet... If you know what I mean... I mean a Coffee, of course..." He utterly and completely did not mean a Coffee and this guy was due a flattening. A spin on her heel was giving her hope she could get away from him as quickly as possible. A curt smack to her behind forced lightning over her arms. "OH, THIS MOTHERFUCKER WAS GOING TO GET IT." Celestia screamed in her head. She moved quickly to the counter and slammed the check on the counter. The manager made the beverage and uttered a simple "sorry..." to her as she made her way back to the table. The perv had moved slightly, moving further into the booth which would force Celestia to bend over in front of him to put his drunk in front of him. Bastard.

Setting the drink down brought his eyes up to her cleavage. A hand movement so swift Celestia was sure he must have been a wizard. An attempt was made on his part to grab her right breast; "Oh you brought me more, Milli! My love!" He squeaked as his hand came millimeters to her breasts.  With lightning speed, the Slayer brought her own hand up, catching his hand before it could make contact. Lightning sparked over her as her eyes darkened; "I'm sure you know how Milli is known for blowing off people's hands when they touch her? I am no exception." She snarled, throwing his hand away and marching back. The manager waved her over.

"Is everything okay?" She asked sympathetically. "Yeah, he just tried it and didn't succeed." Celestia growled. "Well, you are welcome to clock off now if you would like. I have managed to get someone to cover the afternoon." A short, curt nod was all that she was able to give without going back and frying that guy. But hey, at least she was getting paid. 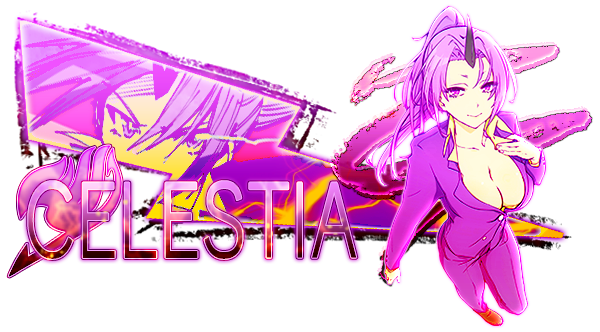