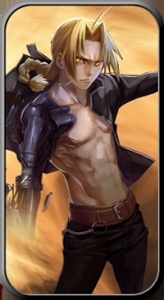 Mammon got up that morning again. It was just like any other day. He would get up and would slowly begin going through his Ilac. His mission and goal was simple find in app that makes Soup for himself. He sat in bed thinking about things, as he scrolled through the app. It was about that time of the day that he should probably. Go ahead and get dressed and eat Chowder. But he was disappointed at the correct moment. He has been taken jobs that didn't pay much or jobs that were basically for free. Not to mention he was simply, annoyed with this all. But it was all for the greater good of the Legal Guild and such. He took a deep sigh placed the Ilac on the bed and went to take a shower, brush his teeth, eat chowder, brush his teeth again get dressed, and make chowder on the road for the next Job, he placed his Ilac in the pocket, and went ahead towards the Guild Hall, to get a job from the Guild Wall.

It was another Non paying job that he took. "I'll be back by the end of the day." he waved to his guild mates and made his way towards the location of the job location. he chowed down on his chowder. He wasn't his normal cheerful self honestly. "Well I guess I have to pick a charity. And raise money. Seems simple enough and use magic in a creative way to draw attention and get the money. Yayay me." he said, finished the bowl of chowder and made his way towards the center of town. He scanned the area and noticed a whole bunch of Homeless people. "Oh for the love of Christ. The shit I do for the Black Rose." he said clutching his fists together, as he took his hands went to the store brought himself notebook and a pen, and something to hold the notebook on a stand, wrote the message. Doing for the homeless charity. Placing the pen down.

He exhaled. "Alrightie time to raise money for this." He said out loud, He opened his mouth and release a flame thrower in the air. As the flames rose in the air, he then willed the fire to go back from the air into his mouth, slamming his fists together, as he would then smile. "I go- No, that's over used." he said, as he claws appeared on his hands. He then, begun to do cartwheels and spins, hitting the ground as best as he possibly can. He would use his flames to boost his flame power on his feet, as he zoomed around the place. This had made people gather around and give him money, Well it wasn't his money it was more for the homeless people.

He leaped into the air. And would then flamethrower his way down towards the ground as the flames hit the ground he would then slowly begin to come down in style. With that being said he would land on the ground and sigh to himself very slowly. He collected the money and would head towards the location of where he needed to drop of the charity. Once he was there he handed the money. And spoke. "Get them clothing, food, and a roof over there head. I'll be back next month to raise more money." He said slowly. With a sigh.

"Thank you." The woman said. "Not a problem.." he said, with that being said he turned on his heel and headed back towards the location of Guild. Hopefully the next Job he takes it would be a paying one. He simply couldn't live like this. There was no fortunate to be made honestly. He did wonder one thing. Would he really be back? Would he really goo back next month. Just so he could raise money he would never get himself? Was it really worth it? To go through all this hassle? And for what cause? So the Guild looked good? Because they were a legal guild. He was actually forced to do things like this. It was annoying and it limited him honestly. Which was in all honestly never too good for business.

Taken a small sigh he would shake his head and sigh to himself. Atleast he made a show for people to remember. Well, it wouldn't hurt coming next month and showing the people of this town what this Clam Chowder Mage is all about. With that being said he went ahead to The Guild to get some food and some rest.