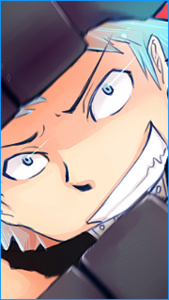 Entering Fiore's astounding capital known as Crocus, Jacky's facial expression would take upon a smirk as the train's doors slid ajar to open. Beside a fellow Requip mage whom Jacky has heard intriguing rumors around, Jacky had eagerly awaited the time in which he would accompany him; Erza Aurence. Learning all he can was a priority when taking on this mission with Erza, Jacky knew that if he wished to become a capable Requip magician then he'd have to witness one in action first. Apart from the person Jacky shall be assisting during this task, Jacky wished to take in the beauty of Capital Crocus as he has only visited the city a few times in the past.

Exiting out of the train in which he had boarded along with Erza, Jacky stretched and worked his joints as they would be completing a job they set out to do. Ahead of Jacky, Erza had flung his arms outward and taken one hefty breath, asking Jacky on what he thought of the capital of Fiore; Crocus. "Never ceases to amaze me either." Jacky let Erza know as they prepared to set off for the job they had been assigned. Preparing to head out, Erza asks Jacky on about what he thought of the city; Fiore's Capital. "Its an interesting city to be visiting. Heard they call it the "Flower Blooming Capital". Must have a shit ton of flowers if that is case, hell even cakes sold here probably have flowers on them!" Is what Jacky happily replied back to Erza as he flung his head around in every direction that caught his attention.

Being freed from the train's confined movement was a blessing for Jacky as being confined or feeling as though he was imprisoned has always been a disfavoring activity for the blue haired magician. Admiring the towering height that the giant known as "Erza Aurence" owned, Jacky hoped to possibly end up being somewhat close to the experienced mage's height in the few coming years. "Damn giant... making me look bad eheh.." Whispering underneath his breath as he witnessed the massive size of Erza, Jacky glanced at the fellow Blue Pegasus wizard whom began to then speak. Keeping up an ear as he Erza spoke, Jacky took it that he thought that the duo should probably best purchase some grub while in Capital Crocus. "Now that your talking about it.. sorta down for some food too." Strolling at the pace of Erza, Jacky let Erza know.

Rambling on about the topic of some cuisine had lit up Jacky's hunger and appetite for a dainty meal to scarf away. Glancing over at Erza, Jacky could sense that he had been feeling it up for a meal as well, Jacky didn't blame him though Erza was technically the first to start up the conversation around food. Confirming Jacky's hunch, Erza let Jacky know on his recently sprung up appetite for a bite to eat. Unaware of Jacky's name, Erza directed Jacky with a question; what his name was. Before being sent out on this mission, Jacky had expected Erza to at-least know of his name though hell; Jacky isn't anyone yet special or notable yet within the guild nor the magic world. "Name is Jacky! Jacky J. Dynamo is the full name if you were curious." Informing Erza on his name as he shined a brilliant smirk, opening up to speak once more. "Heard your new around the guild? I can show you the ropes if you want newbie!" Acting as if he was the mentor in this mission after being taken a bit aback by Erza not being aware of his identity, Jacky contradicts himself as he was a newbie to the guild itself in actuality.

Staggered by the old geezer in which Jacky believed Erza simulated like, Jacky groused as the monstrous sized up mage scuffled up his blue azure hair in a friendly yet teasing like manner. Acts of the sort that Erza played out with Jacky was a somewhat common occurrence within Jacky's previous venture around Fiore's various locations; not many adults took him legitimate wizard. Ignoring on what Jacky had told the brute of a wizard, Erza instead took a nod what the youth decided to spit out by mocking Jacky for his surprisingly young age.

In the start in where Jacky was recruited into Blue Pegasus; guild of legends, Jacky only ever knew of one Requip magician other than himself. To the current reader's surprise, this Requip sorcerer was quite massive in size and height all closely similar to Erza's appearance. Transitioning all the way into the previous conversation once again, Jacky grew to wish for the mission to be over with as for the duo can go on and take up a seats and or orders. After speaking on behalf of his appetite, Erza was reminded to hurry up on the duo's task at hand.

Unluckily all the searching around that Erza started to do as he looked for his mission details that had been missing from his possession were proved futile as they were already within another's nimble sneaky fingers. "Ehe.. When you were occupied messing with my hair, I decided to take your mission details from you." Wavering the paper in which he stole from the so apparent "Expert Mage" beside his smirk face of victory. "Here ya old fart! You read it and lets get packing on this mission!" Tossing over the light feathered paper in which had been folded up toward Erza, Jacky laughed with a hardy laugh directed to mock Erza's unawareness of him being robbed.