A loud, repetitive clang could be heard in the air around the hillside. It was a sound sound. It had a perfect rhythm and beat to it that was perfectly consistent as you heard a metal object strike another metal object. A hammer, striking down on heated steal over the smith’s anvil. A smith of years of practice and training since he was a boy, continued to improve his craft little by little, inch by inch, strike by strike, clang by clang.

As one further went to the hillside they would find a secluded little house made of wood and stone. It was two stories tall and next to it was a small garden in full bloom, filled with anything that could be grown in such a small place from tomatoes to potatoes. A sign was perched atop the door that said “The Frontline” that indicated it was more than just somebody’s home. Was it an inn? Of course it wasn’t. You wouldn’t hear the clashing sounds that echoed throughout the hillside at an inn. It was the shop of a blacksmith.

If you walked in through the door a bell perched at the doors outer edge would chime to let the shop owner know someone had come in. There would be swords and lances lined up around the end of the shop with price tags all around it to indicate what their prices were. Limbless manikins were strategically placed around the front room to show case the armor available. Some were leather, some were iron, some steel, some copper. Some were plated and some were chainmail. Each labeled a price. You would also find two barrels in one of the back corners of the room. One was filled with wooden training blades and was labeled as such. The other was filled with other swords but they were labeled at an unreasonably cheap price. They were rusty and battered well beyond repair and melting them down would cause the rust to mix in and any blade made of them would be useless.

There was a counter at the back with a bell on it you could ring if you were seeking the smith’s services. Behind the counter was an array of masterpieces mounted on the wall. None of them had price tags on them but were well adorned and all had some sort of magic seal on them. It was a collection of masterful works that were made by the previous owner but never got sold to anyone. The current owner was good but not as good as to make the legend shattering pieces on display on the back of his wall.

To one corner you would find a door which opened to lead to a stairway to which you would find the smith’s living quarters. Next to that door would be an opening. Through that opening was the forge. The light of the forges burning flames could be seen through the doorless doorway. Inside lay what was a mess on the outer edges of building materials. A work bench on one side was the only place with some organization. One of the walls was gone to let air in to avoid overheating and to provide a way to escape should a fire start and get out of control. The 3 walls were entirely stone and so was the floor, unlike the shop which was mostly made of wood. Inside here you could see the smith staring down at his anvil with what seemed like disinterest as he struck the steel he held over the anvil with metal pliers. Yet he was not uninterested. He was perfectly focused on his blade as he put the finishing touches on it and dipped it into the water to cool. The steam billowed around as the water rapidly cooled the hot steel before placing it on a wood stand to allow it to cool, where many other blades already were. He heaved a sigh as his standard work for the day was done. He finished it early too and had no special orders for the day to work on. He grabbed a wet rag nearby and flung it over his face as he wiped the sweat from his unmoving and unflinching brow, thinking he might as well work on the garden for a while before going at a game of solitaire or perhaps just lying back and watching the clouds.
_____________________________________________________________________________________
E's Dialogue
E's Thoughts
ErzaScarlet_Tatania 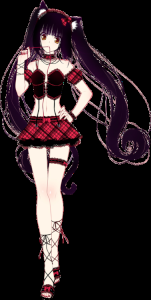 The neko walks into the blacksmith shop and look around. Her black hair was in its usual pigtails and her ears were twitching from the sound of steel hitting steel. She looked around for the owner and sighed. She was wearing her favorite outfit which is a black half top and booty shorts with black thigh high boots. She walks around waiting for the owner to come out.
Xiao Jing

The morning was a bright and vibrant one, and unlike most people who were uninterested to work in such fine weather, one girl was half a mile deep into a long list of errands that the Seamstress had told her to do, scribbled unto a roll of paper that she'd only recently began to finish. Endora was very particular with her work, and while her apprentice didn't seem to mind travelling around Ishval as it was, she'd take that as an opportunity to refill and increase her stockpile of essences and metals, and on that day, the Seamstress was in need of a specific kind of metal for a tailoring experiment.

Merrilee raised the parchment to the sunlight as she traversed the slopping hills that lead to her destination, following her master's coordinates that'd lead her to a curious little establishment just around the bend. The starling only ever received just a brush up on what kind of shop it'd be from Endora, but regardless of the brief information she received, the girl was obliged to sport just a bit more admiration for the process of creating functional weapons and armor with flame and metal. She didn't put too much expectations of what she'll see when she'd arrive, but that didn't stop her from wondering, idly, what it was like to work for that kind of craftsmanship.

Her steps would all but falter as she spotted a humble little abode a few meters away, squinting at her paper slightly and, when she found a resemblance, decided to break into a sprint as she approached the smithy with an unmatched enthusiasm.

Huffing a little from a loss of breath, she'd gingerly pry the door open, the doorbell ringing noisily across the space. To her surprise, someone else was there too, a strange human, with the features of a cat, although she was clearly on her own business then, so Merrilee opted to not become a bother. She raised a brow as she hopped off to one side, spotting an ensemble of swords and various other weapons up for display.

The bell rang to signify the door had opened. He had a customer. Ean let out a sigh at the thought of having to associate with others on this fine day. It is what it is though and Ean wasn’t going to decline a job . Thus Ean finished wiping himself down before tossing the towel towards the work bench and heading towards the front.

Ean was surprised it was as quiet as it was and it made him hopeful that this would be a relatively quick and simple event. Maybe the person places an order. Maybe they buy a few swords already made. But they’re out the door quickly and Ean has a little extra cash in his pocket. Ean’s hopes seemed to be dashed as he walked through the doorway. A young girl, late teens at the latest was in his shop. Young shoppers never seemed to stop talking and it was a girl no less so Ean was already in a bad mood. He didn’t hate women, but he was never comfortable around them.

Ruri looks up sensing someone watching her. She sees a handsome man and smiles. "Excuse me. I noticed you were looking for help." Her voice was smooth. She walked up her black hair flowing behind her.
Xiao Jing

The man who sat by the counter was a tall and quiet one, and because she felt significantly small in his presence, she opted to hide her face under the shade of her rabbit hood, shuffling awkwardly from foot to foot as the taller lady with the feline features sauntered over towards him, front and center. Slipping into the sidelines wasn't a particularly pleasant idea for her, but this specific human had a strong and upfront aura lining his masculine outline, and with her limited experience, she was almost inclined to be feel insignificant in that small shop.

But there were too many things to behold, too many things that were left open for the curious eyes and as much as she initially hesitated to roam, it only took her a matter of seconds to find a new enthusiasm for the displays that littered the smithy's interior. Her childish form would later be seen skipping over to a peculiar thing that mimicked the physique of a human that had no arms or legs, and had no distinct features or lifeline, for that matter. The starling tilted her head to one side as she observed it with a large, sterling blue gaze, curving over the patches of brown leather that were molded seamlessly together, binding around the torso like a protective garb. There were to be very similar ensembles of such, the others showcased other designs made of a shiny metal that glistened under the sun -the prettier, shinier armors that made her eye sparkle would obviously lure her attention, and inevitably, she made a bee line for them, blinking rapidly to try and accommodate the sparkle that bounced off their surface.

Inevitably, due to the constant poking, and the determination that she poured unto each consecutive push, it slowly began to wobble on its fickle foundation, and with one last motivated push, a heavy piece of metal came toppling down her smaller figure, crushing her beneath the metal plates.

And then there was a scream, a girly scream that rang out noisily across the space.