Faith stepped out into the sunlight from the dark shelter of her make shift home. It had been only a year since her activation seeing the sky, the cities, and the people where all so new to her. She knew what all of these things looked like, she knew all the names, but it was different seeing them for the first time. The world was a lot bigger compared to the confinements of the abandoned theater where she first woke. Regardless it did not overwhelm her, in fact she was perfectly whelmed. The data stored in her mind gave her direction, it gave her knowledge. Seeing all these things of the world only made the images in her mind come to life. She was thankful, thankful but lonely. She knew she had a creator, no, a father. She knew she had a father, yet she somehow knew that her father was no longer of this world. Her father Shinra was a magitech scientist that made her, all the information she knew, her body everything was made by the hands of one man. Though Faith could not recall any specific memories of her father, it was all a haze, she could faintly remember his warm, caring his hands as he assembled her heart. Despite all this Faith remembered her fathers request.

Faith, I know by the time you wake up I will no longer be around. Do not be sad my child move on forward, I left you the gift of knowledge. Your heart can feel emotion. So please as an order, live your life, protect everything you hold dear, find happiness. You can find all this if you find the fairies. One last thing my dear, you are not just a machine, you are my daughter, and I love you very much.

Faith closed her eyes recalling the words spoken by her father. Upon receiving the courage to once again explored to find the fairies. She had been wander the country side for a year and her travels led her to the heart of Magnolia. She had heard from a farmer in the outskirts of magnolia that a guild called Fairy Tail once resided there, but upon her arrive she found nothing but the rubble of the the once grand guild hall. A slight tinge of disappointment pricked her heart, the feeling was new to her, but she quickly shrugged it off to explore the large bustling city. Her disappointment was forgotten and was instead replaced with awe and wonder. People generally stayed away from her, probably thinking that Faith was blind due to the cloth wrapped around her eyes, but in fact she wasn't blind at all. The cloth wrapped around her eyes was a special cloth woven by her father himself, it provided her excellent vision at the same time hiding her eyes so that no one would know where they wandered about.  However Faith duduced that people probably stayed away, since she had a floating katana and a behemoth of a sword behind her back, her weapons where held aloft by these magical rings that glowed like little halos. Faith watched as people walked past her, she saw their curious eyes as she made her way through the bustling city. She was lucky enough to find some kind people who gave her the time of her day to listen to her ask the question she had: "Where can I find the fairies?". However it was to no avail, no concrete answers where given, as a result Faith decided to take a break and sit down at the city fountain.
_____________________________________________________________________________________

Justin found himself in Magnolia after a job he had been doing a job. He hasn't been here since he went to prison last since he stole that diamond as Alias. He shook away the memory now wasn't the time to be thinking like that he had to fight those urges to steal he was a light mage and he needed to show he has changed. He continued to walk through the city seeing all the happy people walking around even though it is no secret what happened and he could hear people talking about it. Fairy Tail has gone dark. it hasn't been long since that happened but it was a shocking event to say the least and to up and leave Magnolia the place they had such history was well so sudden. Justin wondered what happened he had read about it but there was obviously more to it then that. But there was little that could be done for now while he was sure i be an issue later for now he wasn't here about that.

Faith turned to the voice, she looked through the cloth that covered her eyes. She then looked at the extended hand. She politely accepted the handshake and replied "The name is Faith....Faith Caliburn." She brushed her white hair away from her face with her free hand as she spoke in a soft gentle manner. The glowing magical rings that held the two swords aloft glowed a bit brighter as if alive. The larger sword floated to the right side of Faith while the katana floated to her left. Faith released the handshake to touch her swords, as if petting them. "It is alright Athena, Ares.....I do not think this man means any harm...."The blades floated slowly behind her to their original place, as if reluctantly. She laughed softly and turned her attention to Justin once again.

Justin looked at the swords floating as she seemed to calm them down, Athena and Ares huh interesting that she had names of for her blades and that they seemed to react on there own. she said they were protective of her which made him very curious indeed. But at the moment they weren't a threat do he was determined to keep talking. He gave a small grin looking at the girl who called herself faith, the fountains ambient noise in the background as he smiled at her. "Faith huh, my what a lovely name" he said seeing her face more clearly wondering briefly why half of her face was covered up but figured it was personal so he would bring it up later. He then smiled again at her again now wondering if she lived here. Though she then stood up looking at him asking what she could do for him today, he tone was hospitable which was a good change of pace then the normal instant rejection he has gotten before. 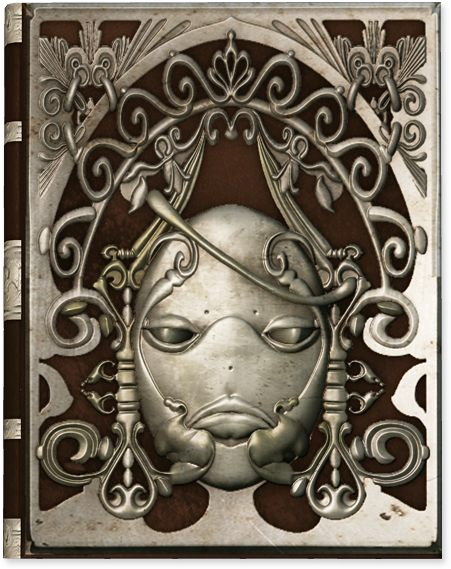 Faith opened her mouth to respond to Justin's question, but before she could say a word a loud regal voice barged in the conversation. Know your place! Do you not know who you speak with? This is Lady Caliburn, the chosen one to bear us three ancient artifacts! Why I ought to smite you where you stand you filthy scum! The voice rang loud and clear, but it did not come from a person. Instead the voice came from a floating book. The book opened and it's pages flipped rapidly, sparks of energy began to fly as a magical seal above Justin. Rune began to write itself upon the air as a huge amount of magical energy began to concentrate in the center of the magical seal. Any last words boy?! Hahahaha I merely jest with you. Your words are not worth my time. Die! The book laughed as the seal released its energy. KA-PFFFT! ZZZTTTT! PAH! An odd sound came from the seal, it sounded very much like a dying locomotive running out of steam as it puffed its last breath. A small light of energy floated down on Justin's head like a snow flake, it fell on a strand of hair sizzling burning not even a centimeter of his hair. The book floated in silence, if it had a face it would be dumbfounded. Faith glared daggers at the book. Damn it!...... the spell failed. My powers have not yet returned. As the book cursed and muttered to itself. Faith then suddenly took Ares and slammed the book into the ground with Ares' flat side. BWAGH! What in Gods name are you doing Lady Calibrun?! OW! Gah! Ow! Alright! I understand! I apologize! Stop it you'll break my bindings! Faith continued to beat the book until she was sure she had literally hammered in her message. Even while she did this, she somehow managed to do it gracefully.

Faith let out a sigh and brushed her hair back and once again straightened out her dress. "Forgive him.... He too....is quite over protective...... His name is Grimoire Genesis, but i call him Grim for short.... Among my three weapons...he is the MOST....talkative..." Faith smiled as she grabbed Grimoire Genesis and held him forcefully in her hand as her other hand let go of Ares. The large book squirmed and protested with out avail. Athena twirled around behind behind Faith as Ares joined her. The two swords seemed to vibrate softly as if giggling at Grim.

Don't you two laugh at me! I thought you were on my side! Also, address me by my full name, Grimoire Genesis! My name is not Grim. Faith glared through the cloth that covered her eyes. Though no one could see her death stare, Grim was well aware that his master was displeased. "I let you three out expecting you would not cause trouble. You requested to see the world as we journeyed. You three are making me regret my decision, especially you Grim. Now apologize to Mister Tyme." Faith said sternly as she let go of Grim. The floating book turned so that its front cover faced Justin. You live to see another day boy. Be thankful that Lady Caliburn spares you. The book vanished without apologizing.

Justin watched his eyes widened as as a book that claimed it's name was Grimoire Genesis and The lady who told him his name was faith argue with each other. This was defiantly bizarre to say the least but non the less it was entertaining to a point. Though it got upset about it's name being messed up. For some reason it struck a note with Justin to a point. He understands being, well him that your name is no joke it is what makes you well you so he could sympathize with him. He then heard the books way of apologizing which made him laugh a little bit as it told him that he should be thankful she is sparing his life. To this he simply nodded as the book was put away. I'll be sure to mind myself Grimoire Genesis" he would say then looking at Faith again who then looked. She then Apologized to him about his attitude with Justin just nodded. "It is no worries my self esteem will recover" he was say jokingly to lighten the mood a little as he looked at her. She then told him why she was there in which Justin's eyes widened a little bit.