Dance with the Devil [Closed| Complete]

Dance with the Devil [Closed| Complete]

The sound of an approaching train could be heard from miles away; hurdling down the track was the one and only Vlad; Being aboard this train was something that was quite useful for Vlad. While aboard the train he was able to: obtain information on the town, gain a vague grasp on each of the passenger, and deem who his target was. While he was not on a job that was requested by a man, he did have an objective; he needed to make a sacrifice. Having not done this before he decided it to be best to do it as soon as possible. While he was not, exactly, sure on how to do this he had a vague idea. This is all that he needed; he could figure out whatever he did not know. This is where we find our protagonist, Vlad, today. He has found the need to go on the hunt.

The train ride was rather smooth, this surprised Vlad. He expected some sort of unpleasantry to be associated with it; how could something so perfect exist in this world? The answer to this question; it cannot. There was nothing perfect in this world, there was always a downside, or negative. This was very apparent to Vlad, and it was hard for him to believe no one else saw it... This train of thought was cut short when he overheard a conversation between two females:

"So, What are your plans tonight? Are you going to the Temple again? Don't you ever get tired of going there?" She asked her friend, looking out the window of the train. They both appeared to be plain humans, nothing too interesting about them. How dull, such boring women.


"Well, they have some really~ interesting books there... It's not like I spend the entirety of my day there! I do other things as well! Geeze..." The female sighed, looking around the train. The two, this is to say the female and Vlad, met eyes for a moment. Looking away quickly the female continued to speak. "You should try reading sometime." She seemed to be a bit worried about what her friend though; such insecurities... Which one? Which one would be the best...


"Why not both?" This is what he had heard, in reply to his own though. Shit, again? Vlad knew exactly what this was; he had dealt with this before. "How hard could it really be? They are quite small women... Just take them both... We don't even care what you do to them before... Have some fun. Let loose; we know you've been holding back. Accept your fate, it would allow you to have a much better time. You will experience joy like you've never known before." It was as though the devil was standing beside him, whispering into his ear. Yes, he knew this was not the case, however, he did not dislike the idea. While it may not be the best thing to do, nor the most promising targets, he did want to do this ritual. Well, it was decided. These next few days would consist of nothing but bloodshed. There, of course, would be a repercussion to this deed.

It was obvious which he had to target first; the female who had not disclosed her plans. He could find the other female at any given time; even if he could not, he did not care. The train began to slow, approaching Oak Town. The female, lets call her Vicky, would exit the train and immediately turn right; her friend, who we will call Amber, turned left. A demented chuckle escaped Vlad's lips; the mere thought of what he would do to these females excited him. It was a rather dark perversion, but it was something he enjoyed. These things may not, exactly, align themselves to Vlad's beliefs, but he enjoyed it too much. How could one resist something that allows the person to enter a sense of euphoria.

His eyes pierced her soul; there was nowhere she could hide at this point. Her soul was a bit different from the rest, perhaps this is why they wanted her. In reality, this mattered not to Vlad. He could care less for what they wanted at this point. They were nothing more than parasites to Vlad; although they allowed him access to this power he could care less for their needs. Scratching the back of his head he looked around the area; it seemed that they had entered a sort of shopping district; how cliche. Now, ten meters behind the female, he leaned against a stall, browsing the merchandise. This would continue for hours; she never bought anything, just window shopped.

The street's began to grow dull, the sun setting. It was time to strike; they were becoming persistent. "Hurry... She's going to get away! DO IT NOW!" How dare THEY demand something of him!? He would work at his own pace!


Quickly, approaching the female from behind, he would put his hand over her mouth, dragging her into a nearby abandoned building. Good, now comes the fun part!

Not for the Faint of Heart:
Throwing her to the ground Vlad was smirking. "Ah, I do apologize for the rude introduction! I am Vlad, and I would like to thank you for your sacrifice." He chuckled, taking out a blade from the back of his pocket; something he had stolen from one of the stalls earlier.

Vicky simply stared at Vlad in disbelief. How could this happen to her? Why? What did she do!?

This is what led to her death; lunging forward he slit her jugular vein. Undressing the female he would place a pail on the ground, and hang the female over it. Exsanguinating the female was the first step in this ritual. After an hour all the blood had left her body. Using her blood he would begin to draw out the magical circle. 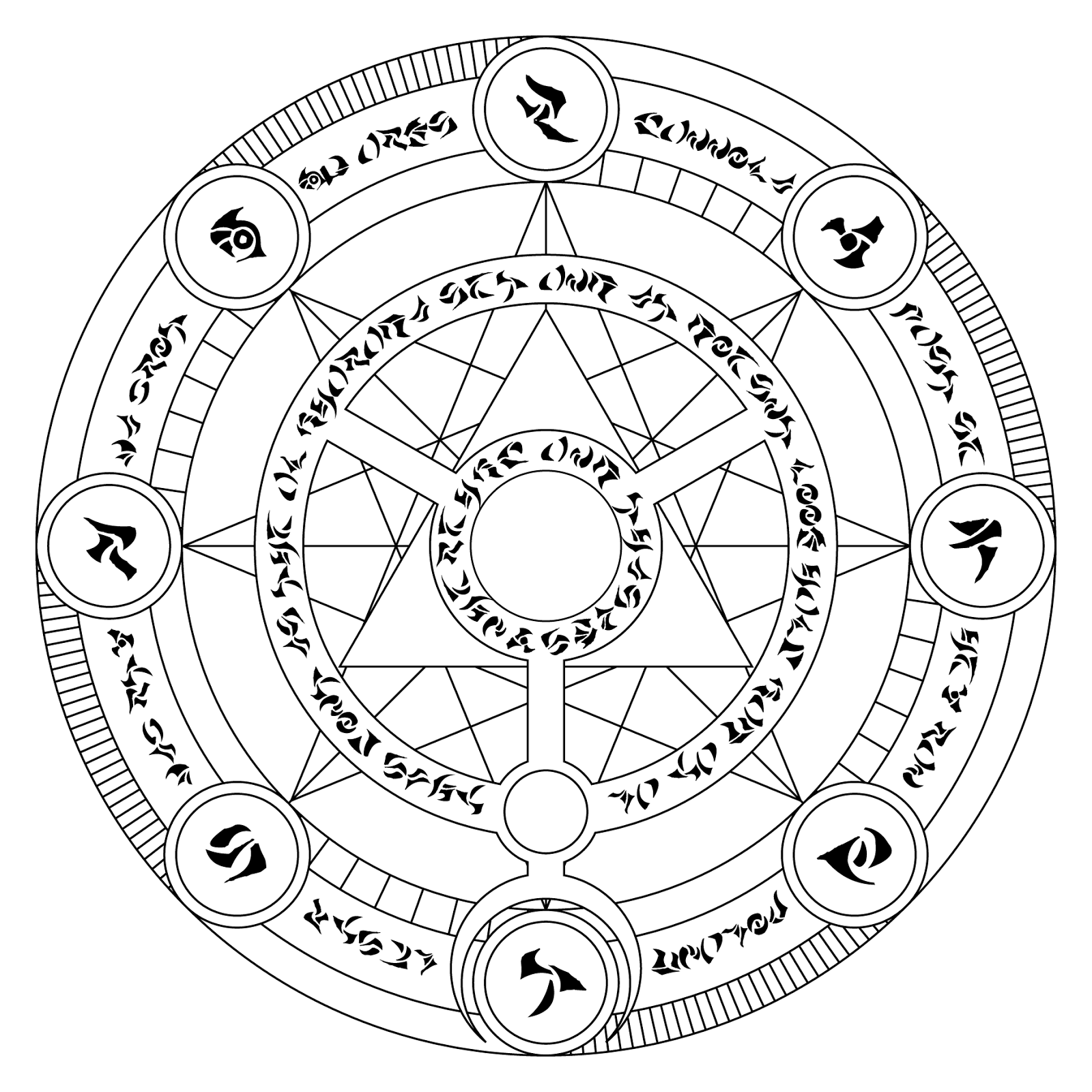 Placing the female in the center of the circle he ran his hand down her cheek. Such a dull fate for such a beautiful girl. How sad... Vlad began to chant in a foreign language, something very few would be able to recognize. Upon finishing his chant he would use the remaining blood to write the following:

"This is not the only one who shall fall to my hand~" It was a simple tease.

Exiting the building, wiping the blood off his hand, he would begin to head toward the temple, to hunt more prey.

Re: Dance with the Devil [Closed| Complete]

They were satisfied. He could feel it; this was an addictive euphoria. It entices those who felt it, made them go against their own beliefs. While it mattered not to Vlad, it would break the spirit of most men. A feeling of pure bliss, hindered by nothing; it was strange that this did not destroy Vlad, simply propelled him forward. Most men would crumble before such an activity; in an attempt to secure this feeling forever most would destroy themselves. It was a pathetic sight.

Wiping his hands off he would continue onto his next victim. This sensation was something that could only be compared to climax. It something one could not understand unless they experienced it; just as with everything else in this world, it was not perfect. There were repercussions, or rather, it required payment.

Smirking a bit he could feel it rising up, he wanted more. He wanted this sensation to overflow his body, he wanted their embrace. Walking down the street his senses were enhanced; he felt the gentle caress of the breeze, it was amazing. The sun was still down, it seemed he could do this in a day or two. How amazing. Who would have thought he would be able to do it so quickly? Oh, he could really enjoy this one. This would be a public exhibition; he will share his will with this town. He will demonstrate what he is capable of. He would taunt what they called law. It was all corrupt, he disliked it.

Vlad was a man who did as he pleased to achieve what he wants; his goal, in short, is to reshape this world. This corrupt system of right and wrong must be torn down if it wished to begin a new. This world has been soiled, and it must be cleansed. Vlad will be the man who did it; he would not allow for it to continue as it has been. The Wizard Council did nothing; the Rune Knights were practically non-existent. The Wizard saints? Who would know they existed at this point?

He was now quickly approaching the temple, it seemed the place was still open. The outside was very well kept for such an old building; the ornate inscriptions still very clear. Such beauty... he would taint it.

The building was rather quiet, not many people remained this late. Smirking he would begin to search the library; that's where she would be. He was ready to finish this night. Approaching the female from behind he would  simply snap her neck; this was meant to be a message; with the ritual complete he was feeling brazen. Bringing her to the top floor he began to collect the "keep out" chains. He had a plan for this female.

Laying her on the ground he would run his hand across her cheek; what a beautiful message this would send. Tearing off the females shirt he would take out his blade and forcefully stab the female below the sternum. Running the blade down to her waist he would remove the females internal organs. He set them down beside him. Wrapping the end of the chain around her neck, and the other end to a bolted down radiator, he threw the female out the window. Her body would dangle, for all to see. This was only half the message. Now, he would write a rather nice letter: