Job: Swimming Lessons
Rank: D
Player Requirements: D-rank and above
Job Requirements: Minimum of 5 posts of 150 words per character. Make sure brat does not drown.
Job Location: Magnolia
Job Description: Can you believe this? My son wants to help my husband on his fishing runs, but is unable to swim. Both of us are too busy with our jobs to personally teach him, but you seem to be perfectly able to! Please teach our son to swim and we will provide what little money that we have towards paying for those lessons.
Reward: 500 Jewels
Leivinia Rikou

“Hrrrrmmm…” Leivinia stared at the job request bored with an audible indecisiveness. It was raining outside which signaled the arrival of fall, and with it, a noticeable drop in temperature. This is the reason that the girl who controlled Dark Matter was wearing a jacket which was several sizes too big. The sleeves were nearly touching the floor as she shifted her weight back and forth, her eyes glossing over the various flyers.

Why was she wearing that jacket?

The ice mage, Natalia, had decided against wearing it and so Leivinia wore it herself. Rainn didn’t really need it, did he? “I mean… his name is Rainn,” she pointed out while her nose wrinkled. “Rain shouldn’t really bother him.” She had never talked to the guy outside of ordering drinks, so she couldn’t say that for sure. But the jacket was comfy and so she would convince herself it was hers now.
Rainn 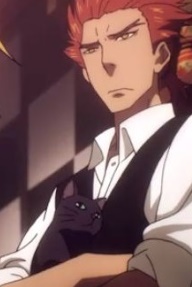 Those three simple words were Leivinia's answer to Rainn's question and she didn't even bother to turn her head. She looked over all of the various jobs; there seemed to be a lot since most of the wizards were already in a job or they were taking today off because of the weather. Did she want to bake a low-fat cake for an obese elder? Did she want to help in studying the unique mating habits of krill? None of these jobs were well-suited for her and so she did what anybody else in that situation would do.

"Do a job with me since I'm adorable." The girl with wave blonde hair made no attempt to smile or act cute in order to reinforce the point, but her arms did retreat into the jacket as if to declare 'It's cold out here and this jacket is mine.'

The flyer which Leivinia was focusing on was a job request for teaching a child how to swim. It wasn't really a job that required magic, but were any of these low tier requests? With the influx of rain it would be a good idea to learn how to swim, and that's what the client was thinking.
Rainn

She turned to scold Rainn with an 'Of course I can swim!' expression but her words seemed to be caught in her throat.  A thin, thin smile spread over Leivinia's face. "I mean..." she trailed off, desperately trying to find the words to get out of that question. "I can fly, so there's no need to know how to swim, right?" With a triumphant huff she grabbed the flyer and scanned over the minor details. The pay was decent considering the job, and a day at some rich snob's pool didn't seem too difficult.

"I will just have to be your emotional support," she explained as her role in the job. "A-and maybe... if he learns quickly... and there are leftovers..." Her eyes were looking down and Leivinia twirled her hair around her index finger. "I could learn to swim," she finally spat out as if it were a sour tasting candy.
Rainn

Leivinia's face went red and her pupils widened. It was probably more creepy to see than cute, but either way the girl nodded furiously and ran away to retrieve her swimming suit. Or rather... that's what she would have done if she had a swimming suit. Why would you have a swimming suit if you couldn't even swim? Instead, she just put on clothes that she didn't particularly like or mind getting wet.

The train ride wasn't terribly long; every now and then Leivinia would ask her traveling companion small questions. For the most part, she simply stared out of the window (she insisted on getting the window seat.) And then they finally reached Magnolia! She had recently been to the town and that is why she proudly marched to the client's house with her chest puffed out and her floaties held high. She knew the area. A little bit. They only got lost three times, but the client's house was finally found! It was a large house with a pool in the backyard, perfect for swimming in.
Rainn

The train ride was nice. The walk around the city however, was something different. Levinia took the duo on a walk around the city a couple of times pretending to not be lost. It was adorably frustrating, but Rainn didn't let it phase him too much. He just wanted to get to this place and finish the job. Teaching children to swim sounds much easier said than done, and even with all the patience in the world, Rainn could be in for some trouble. He could only hope that the children were quick studies.

"Rather nice place, eh?" He spoke out once they reached the entrance way of their destination. It was a rather large house. These people were more than well off, and it made perfect sense as to why they would just hire someone to teach their child rather than doing it themselves. No matter, The duo approached the front door and Rainn simply knocked a few times. It took only a second for a rather well dressed elderly man to answer.