Take Care Of My Baby! (Mission/Alyia)

Take Care Of My Baby! (Mission/Alyia)

Allen balled up the paper in his hands with a disappointed face, shoving it into his pockets. The paper that had the information of what would be happening today...Today was different. Today he went on his second job with Alyia. His eyes grew wide as he kept rereading the request. "I can't believe I am doing this..! Wait, why am I doing this? I shouldn't be doing this!" He shouted, currently on the edge. It took every bit of courage to get his first job done. But this was a new experience he'd have to face. Taking care of a human child? Allen wouldn't dream of it. But it's not he could avoid having no money forever. He pouted, and awaited Alyia's arrival by a bench impatiently.

He crouched down onto his toes and put his weight on his legs instead of sitting on the bench itself. He was practically trembling, he was freaking out before she even arrived. He grumbled, "I need to relax." He sighed. He was reluctant to go in the first place, but he was willing to complete his task. He took a deep breath and opened his eyes, revealing his golden optics. His red hair fell in front of his face, shadowing his expression and curtaining his eyes. 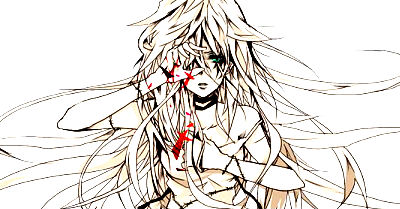 I'M AN ANGEL BUT I'LL STILL FIGHT FOR YOU

Alyia ran through the streets with a bright smile on her face, today she was going on a job, but it was not just any kind of job, she was to be taking care of a child today. That, though, was not the part that she was most excited about. The part that she was most excited about was that she was going to be doing the job with Allen. She hadn't seen him since she had last saw him when she took him to the dinner. Alyia couldn't help but feel giddy. Wait. Giddy? The blonde skidded to a stop and scowled at herself. She was not a girl to get giddy, what was wrong with her? Feeling more solem the angel pushed on and though she had scolded herself the smile that she once wore had grown on her face once again. She couldn't help but be happy she liked Allen's company no matter how he acted or what he thought about himself. With crystal eyes sparkling with excitement the angel started to speed up her motions and soon enough she was running once again. Turn after turn and street after street the blonde raced through Magnolia and with her speed it didn't take long until she had reached her destination. Scanning her surroundings, the blonde looked for her companion for today's job. It didn't take long till she spotted the red mess that Allen called his hair. Alyia started to make her way over to Allen happily be paused for a moment as she looked him he seemed to be slightly shaking. He was scared, her smile softening the angel made her way to the dragon slayer and sat next to him, placing her hand over his. She wasn't going to say anything in this situation, there was nothing to say.

Allen buried his face into his arms as he sat on the ground, nervous beyond belief. The few minutes that passed by seemed like an eternity. He stared at his eyelids for a certain amount of time before the softest, warmest sensation caressed his hand. A sensation that glided over his trembling hand. But then the trembling stopped, and opened his eyes only to be greeted by a ray of sunshine glaring down onto him... but also by the sight of beautiful, jeweled eyes of a even more... well, decently scented person. It was Alyia.

Allen only stared at her in silence, a calmness consuming him whole the longer he stared. But, his golden optics shifted away from hers and stared back at the dry ground. His jaw planted into his arms once more, a sullen look growing on his face. "Hi... w-...where are we going?" He whispered, calmly... or rather, trying to keep the act up. In truth, he was nervous beyond belief. But he took small, calming breaths once again until he was able to glance at Alyia again.

He stood up and pushed the red mane out of his eyes, looking over to Alyia with a flustered look. He hesitantly extended his hand and offered to help her up. "Sorry..." He mumbled, his gaze averted elsewhere. He didn't want to make contact, it's shameful that she'd force herself to comfort him.

I'M AN ANGEL BUT I'LL STILL FIGHT FOR YOU

Alyia smiled at Allen as he looked up at her, her crystal blue eyes meeting his golden ones. Alyia always felt slightly softer around the red head and she tilted her head in curiosity as to why he was looking at her still. But as soon as she saw him look down at the ground she grew concerned. He seemed a little down. Though as she heard him as a question her smile appeared once again.  She looked away and leaned back against the bench with one hand still on his and the other in her lap. "Well, we should probably check in with the woman, right?" A sheepish smile then grew across her face as she looked back at Allen. "Sorry, I've never babysitted before. This is brand new to me." Alyia was indeed new to watching children making her slightly nervous but she needed to be strong for the olded dragon slayer.

Seeing Allen suddenly stand up the blonde started to follow him but her eyes went wide as she was him extend a hand to her. Her cheeks began to slightly redden as she took the hand and used it to stand up. But as she heard him whisper sorry she tilted her head and smiled at him and with her hand still in his started to lead them to the clients house.

Once they reached it Alyia looked up at Allen and nodded. She reached forwards and knocked on the wooden door to the house of the client.

It was one thing after another. The two silently approached the client's residence. Allen stumbled, and flinched with every movement made. He was still nervous. He could feel the tiny beads of sweat run down the flesh of his face and wrists. The moment he heard the knock on the door, who swallowed. Reluctant to stay, but he did.

Hesitant, he was in the midst of turning back. But at the very instant, the door creaked open. Revealing the rather flashily dressed woman standing on the other side. Allen widened his eyes, she reeked of perfume and the scents within the house were foreign.

The perfume covered lady grinned at the two, introducing herself and all who dwelled within her residence. Allen only glared, taking a big whiff (A whiff of something he soon regretted), of all the scents inside. Out of all the 'dreadful' scents that filled his lungs, a rather peculiar one stood out. Children... "Mm..humph." He grumbled, walking past the lady with no regard to manners and charged into the home, in search of the child.

The lady only turned and watched, shocked. But Allen paid no mind to her or anyone's reactions to his doings. Eventually, his sense overthrew and ceased his pride and he simply sat down on the floor. Much like a dog, if anything. Hi..." He waved, insincerely. He couldn't help but do so grudgingly. But a job was a job. And it happened to be his job so he was willing to do it.
Aliannah