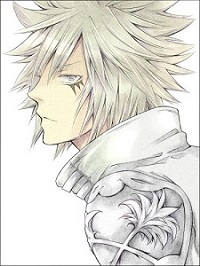 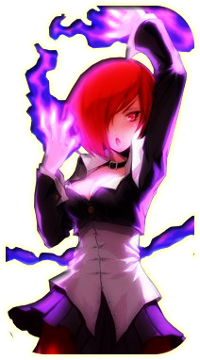 Elizabeth was walking through the streets of Crocus when she heard the familiar voice of a young man call out to her, "Hey, Kitty~!" Elizabeth whirled around tense. Her nerves calmed when she saw it only to be the sandy white haired male she had met a few days prior. A smile swept through her face as she fought the urge not to lick her fangs. He had proved rather interesting last time they had met and therefore she had given him her number when he had asked for it. The male had also seemed like he could be an interesting ally and support for future cons. "Hello, Mr. Kurei." She said in a honeyed voice and perfect smile, "It's nice to see you again~" It took her no less than a few seconds to realize where she was. It was the place that had met. "I assume you come here often?" She asked as her hand swept the place gracefully. It was only natural to assume it to be so. "What brings you here? Business I assume?"
Kurei Natsumori

"Not really, this would be my second time coming here. I just so happened to come across you for a second time. " ~ Looking rather pleased by the fact that she not only remembered his name, but remembered that this was precisely the same spot where he had met her. "I'm on official Guild business. As a matter of a fact, I came to persuade you into partaking this job with me." ~Kurei said as he returned his gentleman's smile towards her.

He seemed rather pleased that she remembered him. It wasn't hard. She easily remembered details and faces of everyone and everything. Was she going to tell him such? There was no need nor reason to. "Not really, this would be my second time coming here," Kurei said explaining his being there. "I just so happened to come across you for a second time." She nodded, a sign that she was listening. "I'm on official Guild business," He continued giving her a gentlemanly smile. "As a matter of a fact, I came to persuade you into partaking this job with me." Guild mission? Elizabeth raised an eyebrow in curiosity. A job? "What kind of... job?" she asked as curiosity oozed into her voice. It wasn't everyday she was asked to partake on a job. Nor was it everyday she accepted one either. Kurei held out his arm in an attempt to escort her to the place. "It's nearby and I believe you would agree to this if you haven't lost your sense of fashion." Kurei held out the jobs flier, revealing to her all the major and minor details, but emphasizing the outfit for cosplay. "You could choose just about any outfit you would like, we can go shopping right now if you would care to join me." Elizabeth gave him a hearty laugh. "Mr. Kurei, you have much to learn." She accepted his gentlemanly gesture of an escort. "Fashion? I care not for it. There are much greater and finer things in life than that~" She grinned. Her fangs visible for a split moment, "Although I do like to pride myself for having excellent tastes." Elizabeth looked onwards. She was hesitant to leave her shadowed spot for a split second and into the blazing sun. It was not that she feared it, but she had no shadow. Who knew how people would react? Still, her hesitancy was quickly dispersed. "Shall we go?" she smiled, "The job seems quite interesting. It would be a pleasure to accompany you." She glanced at her current change of clothes. "Do you know of a nearby mall?" she asked with a tilt of her head. She could already tell that this would be an interesting afternoon.
« View previous topic · View next topic »