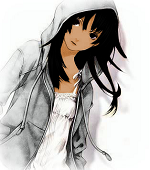 It had been a couple of days since she'd met the giant wooden skeleton guy with the cookies and the other wizard from... Fairy Tail, he said he'd been from. It was a famous guild, she knew, but she'd wanted a bit to think about exploring it further. So she'd lingered around Magnolia for a bit, raided a few pockets (and now had a few more jewels to her name), slept in alleys, and got by okay.

Of course, loathe though Kel was to admit it, this was lonely and uncomfortable. She couldn't earn enough jewels this way to continue travelling if she wanted to eat, and eventually she'd need to find a place to sleep that wasn't under a building's overhang. So, yesterday afternoon she'd decided that to hell with it all, she was going to find Fairy Tail and figure out how to join the guild.

... of course, for someone who couldn't read very well and who refused to ask for directions (and the one incident of running madly away from a probably-very-confused fire dancer and hiding in a terrified little ball for the better part of an hour), it had taken a full day to explore Magnolia enough to figure out where in the hell this guild was.

She carefully prowled around the outside of the guild hall, eyeing the huge banner on the tower. That was the guild mark, and told her more than anything else that she was at the correct site. She could hear noises from inside, and bit her lip anxiously. People in the guild itself... people she'd have to talk to...

If this doesn't look good, you can always still run away and figure something else out. That reassured the teenager, and with a deep breath and a straightening of her skinny shoulders, she started to walk to the door. Her hoodie was a little darker with stains, her jeans were a bit muddier, and her white tank top had, after being unfortunately torn during one of her escapades, been shortened to expose her small, pale stomach. It was as good of a first impression as she was likely to get with her current state of things.

She gulped as she took hold of the door handle before pushing the door open, cautiously slipping inside the guild hall and taking her first look of Fairy Tail's mages. That... was a lot of people. What was she supposed to do? Go up and tell somebody important looking who she was and that she wanted to join the guild? No, that wasn't happening. Kel's already-strained nerves weren't having any of it. It was enough right now to just observe and not go up to anyone right now. Although if someone came up to her, well...
Aiden Ainsley

Lance and Lea were sitting down at a table in the front of the guild hall alone. Lance was asleep while Lea was trying to wake him up and failing. Her small little voice wasn't loud enough to be heard by the sleeping Lance. She looked around for a second and saw a girl observing the area quietly. Lea had decided to wear a cute ponytail today that she was now taking out before she talked to the girl. Her blue hair fell down as she walked over to the lady shyly "Uhm... miss?" she said with a blush as she lightly grabbed the ladies arm "Can you wake up my dad for me?" she said pointing at the sleeping Lance at the table. Lea's cat ears twitched as she asked the question and her tail swooshed around.