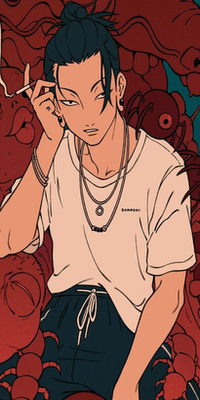 OOC Note: This magic is designed for PvE and I have no intentions of doing any PvP. If I do i'll add the numbers at some point, but I prefer statless.

Magic Name: Great Sea Arc
Magic Type: Ancient Lost Magic
Description: Great Sea Arc. . . a magic once believed to be lost to the sands of time. It was only by chance that Aku managed to find the ancient tome hidden away by it's last known user, an ancestor of the Benkei bloodline. This magic allows its wielder, Aku, a bond with and the free manipulation of oceanic forces, the most obvious being water itself; as well as the power and properties that reside within and account for the makeup of the vast seas (pressure, temperature variances, seaweed, and salinity). This bond is so great that it allows him to breathe underwater indefinitely, merge and move through bodies of water and survive any conditions within the oceans; swimming to the deepest, coldest depths with no ill affect.

Considered the sister magic to Great Tree Arc, it is incredibly powerful and revered (for good reason) as it's control can range from manipulating already present bodies of water, to rapidly increasing 'water saturation vapor pressure' and 'water's vapor pressure' for pseudo weather control and water generation. By creating this process slowly Aku can do this discreetly, or by emulating it's sister magic he can create a rapid rise in pinpoint locations to create devastating explosions. This magic also allows the minor control of seaweed, usually for binding or lashing out at foes but it's usages are limited by his knowledge of the greenery.

The true capabilities of this magic are unlocked by mastering its use and honing ones knowledge of the sea, however with great power comes a great cost.

Great Sea Arc is incredibly useful given it's raw power, making aoe attacks and multi targeted spells a breeze, but it can also be used for pinpoint precision; making it wonderful in single target combat as well. This magic also behaves similar to standard water unless Aku willingly changes the properties, meaning it can still be frozen or evaporated all the same, but the biggest drawback is the over usage of the magic itself. Similar to Great Tree Arc, should the user push their magic beyond it's limits they will begin to become seaweed and once the process begins there is no stopping it. When the user becomes seaweed completely they are effectively dead, however the process can be halted or reversed with powerful healing magics if they're done in time.