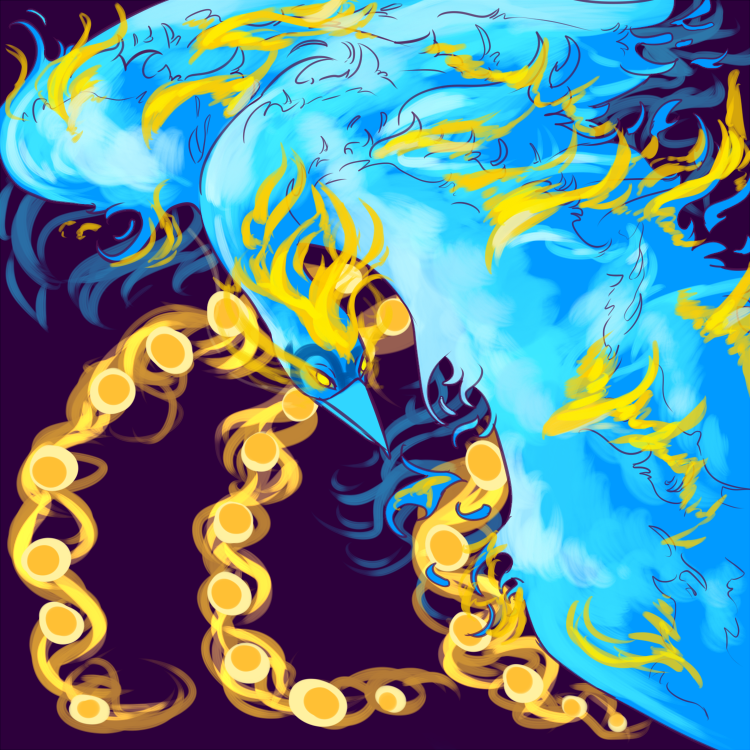 Magic Name: Mythical Soul- Phoenix
Magic Type: ???
Description:  Mythical Soul: Phoenix, is an ancient takeover magic that allows the user to transform into a phoenix partially or fully, while also granting the user the powers and abilities both magical and physical of one. The Phoenix can be found in various mythologies across the world and have been depicted and reinterpreted as many times as the famous mythological dragon. In a lot of cultures, the phoenix is associated with the sun and would combust upon its death, before being born again. In other cultures, the phoenix was known by other names and represented a multitude of different aspects and contained various spheres of influences. As the Fenghuang and Hō-ō, the phoenix was associated with fire, the sun, justice, obedience, fidelity, and the southern star constellation. The creature was considered to be the King of Birds, and resemble a combination of different avian animals namely- the head of a pheasant, the body of a mandarin duck, the tail of a peacock, the legs of a crane, the mouth of a parrot, and the wings of a swallow. Whatever the case, this magic grants the user the ability to assume the form of a phoenix shrouded in golden and blue flames known as the flames of retribution. The Flames of Retribution, continuously shrouds the user while assuming a partial or full transformation, almost like the feather of the phoenix are made from this mystical flame. The divine flame is said to judge those who touch it, and can hinder and aid those who are wicked and those who are good- meaning, it grants the user the ability to heal allies and burn opponents. Unfortunately, the transformations provided by this magic occasionally robs the user of function hands, for that reason, Nicolas has created a unique way of fighting that combines spell-casting with kick boxing.

D-rank :
Name: Bluejay, first form.
Rank: D-rank
MP Cost: 20 mana points
Category: Defensive
Type: Single | Buff
Durability: 160 hit points
Range: Self
Speed: Self
Duration: 3-post
Downside: Reduction in speed and range for 50% increase to the spell durability.
Description: Bluejay, first form is a basic defensive stance that is designed to be used at the start of combat, with this stance Nicolas would bring one leg with his knee bent and his toes pointed down to the ground. Nicolas focusses his magical energy throughout his body, thus creating an invisible magical aura that creates a force-field that can take one hundred and sixty points of damage. While in this stance, Nicolas can stand on one leg allowing him to “leap” into combat which can provide him with an extra thrust to damage his opponent- the user also receives a 50% increase to spell damage.

Name: Kind Bluejay
Rank: D-rank
MP Cost: 20 mana points
Category: Support
Type: Single | Regen
Healing: 60 hit points
Range: Melee
Speed: Melee
Duration: 3-post
Downside: 100% reduction to spell range and speed in exchange for a 50% increase healing.
Description: Kind Bluejay, is a basic defensive spell that is designed to be used upon contact with an ally, Nicolas himself, or someone else in the battlefield who is injured. In order to use this spell, Nicolas would transform his hand into the tip of a phoenix wing, by doing this the wing would naturally emit the blue and yellow flames of retribution. After the micro-transformation, Nicolas would reach out to touch himself or another person, this would ignite the target on fire however, the fire does not burn but instead heals whoever it is touching. The target receives sixty points of damage back, and once every post they will regenerate five percent of their mana.