A Friend in Need

A Friend in Need

i never told a lie, and that makes me a liar.
❝
The early morning Sun shone thru the two big windows, behind Lyretich's bed waking up the young male for yet another day. As always getting up in the mornings was hard, as he dragged his still half-closed eyes and heavy body to the bathroom for a nice wake-up morning shower. After some good half an hour, Lyre was awake enough to get dressed, as he had no plans today to go down to the surface, he decided to wear some comfortable cloth, which consists off - a simple double-colored hoodie, black sweatpants, and sneakers seem good enough for a lazy day in, he looked into the mirror one last time, to fix his hair before he went out to the cafeteria for some early breakfast.

It was still very early, so the ship was very quiet and almost no one was out yet, except the always hard-working technical stuff, which Lyretich greeted on his way to his destination. After a hearty breakfast, the young boy had decided to head to the Arborium. It was one of Lyre's favorite places, the air was the freshest there, the view was a killed and the greenery was just so relaxing. The morning air felt fresh as Lyre eyed one of the benches before he sat down and closed his eyes, slowly breathing in and out while listening to the natural noises that we're surrendering the area while enjoying the sunlight tickling his still sleepy-looking face.
@Krishna ● notes here ● WC:241/TWC:241
MADE BY MIZO
_____________________________________________________________________________________ 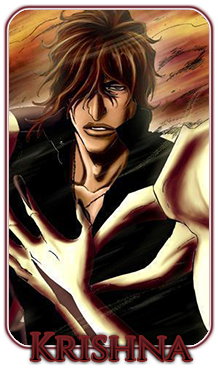 When people decide to sleep in on a beautiful morning, they are truly just fools. That is why Krishna considers many members of Meliora Vitae insignificant. If you want to have an early start of your day, waking up early is completely essential, or well that was Krishna's thought process. Truthfully, many members of the guilds seemed to be much stronger than Krishna has anticipated, though he wasn't completely surprised. When it came down to it, Krishna seemed to be all talk and just no bark in that regard.

With Krishna being one of the first people awake, he took time to sit one a nice bench near the Arborium. Though it was strange for a seating place to be on the ship, Meliora Vitae believed in transforming their own mechanical aesthetics into a true work of art. Krishna could appreciate that to an extent, all though all the guild members are annoying to him so that kinda cancels it out.

At this particular point, he was simply focused on the current book he had. After that disaster at singles night, all Krishna could think about were all the events on how he was truly scarred for life. What were they doing? It was so inappropriate and completely forsaken in Krishna's head. Whats worse was that stupid pumpkin guy.

What were pumpkins though? How did this sort of festival called Halloween used pumpkins? At that instant, Krishna takes out his device and tries to search up pumpkin...but of course...

"HELP, MY HEAD IS STUCK IN A PUMPKIN!"

And whats worse were the awful remixes that came before it. Multiple no lives decided to put their effort into awful production or shamefully taking snippets of other songs in order to produce horrific songs of that statement. Awful. Humans are just fucking weird sometimes.

i never told a lie, and that makes me a liar.
❝
Hm? While Lyretich was enjoying the serene tranquility of the early morning, from the other side of the Arborium, little by little sounds started to come. They resembled such of someone watching an online video. Is someone already here? That's unexpected... The young boy's curiosity was piqued. He moved his still unawakened body from the bench that he had warmed with his lower half of the body for some time now, as he shivered slightly while meeting directly with yet chilly morning air.

He listened carefully, as he approached the ever-growing sounds little by little, as he reached the source of them. "Oh," Lyretich was surprised as it could have been heard in his voice. The source of the noise was a dark-skinned, largely build man. The young would describe the other party as someone who doesn't speak much, or at least he personally didn't have many opportunities to interact with the man, as every time he gave out quite the stiffening air around him, one of not really wanting to communicate.

Krishna instantly taps the pause button on the video, angrily places the device into his phone. His palm was placed on his right eye, making a large sigh of frustration. What an annoying world. No matter how much Krishna tries, he can never avoid the stupidity others give. Stupidity is contagious, at least in Krishna's eyes.

Whats worse when it comes to stupidity is when someone you don't respect approaches you. His head turns to see one of the members of Meliora Vitae simply standing there, expecting the giant to answer. Krishna could just ignore this person...but this was his guild. He needed to show some sort of respect, even if he wanted to punch this person for some reason.

His eyes glisten, the amber color shining in correlation to the rising sun. However, those eyes shrink in disgust, as Krishna switches the position of his head to look forward.

"Something..that isn't your business to ask."

He scoffs at Lyretich's attempt to talk to Krishna until he hears something. It almost sounded like a cry..a cry for help. In no way was it a completely human cry, as it sounded like a creature. Suddenly, Krishna's weirdly non energetic attitude switches, forcing the man to jump upon the cry.

It was clear that there needs to be some sort of investigation. And that was when Krishna walks closer to the sound of the crying, forgetting Lyretich was even present. With every step, he was focused to figure out why something was calling for help.

And than he suddenly starts running towards the direction, with no sound coming from his mouth. His mind was just focused to save this creature so that he can at least do some good in this world.

i never told a lie, and that makes me a liar.
❝
The answer that Lyretich had received was aggressive and had an undertone of disgust or something along those lines, well that was indeed something the friendly male did not expect. He had not really interacted with the man before, so he was not sure where did this sudden hostility come from, maybe he is still sleepy, that would explain why he was grumpy, or so Lyre decided to think, as he had met some other hard spoken people before, yet no one near this level of not wanting to speak, which did irk the young male, but he decided to ignore it and believe in his motto - don't judge a book by its cover.

Before he could even say anything the dark-skinned man named Krishna dashed away in the direction of a cry that resembled that of an animal or more precise one in a lot of pain. Eh, were there any animals or creatures that could cry like that in the Arboruim? Lyretich could not remember their guild leader ever mentioning that. Before actually settling on the Endeavor all Meliora Vitae members that decided to use the dorm option had to mandatory attend a kind of introductory course to the life and things that are actually on this enormous airship, and as far as the slander male could remember all creatures, except birds, and such that could actually fly up so high, were usually located on the third floor - the Rehabilitation & Research branch's headquarters.

Lyre decided to rash to the scene too, following the taller male behind. As they arrived at the scene, a small, cat-like creature was laying down under the bushes with a quite heavy injury on his body, the poor thing looked scared and ready to defend itself against anyone who was brave enough to come closer to him, indeed a cat-like behavior.