Entertainment for the Royals

Entertainment for the Royals

It was a peaceful day in the capital of Fiore, the skies blue and its people roaming about through the city on their various tasks of the day. Mothers and sons would walk towards shops, magic stores would flaunt their wares for aspiring adventurers to come take eye, and the blacksmiths in the trade quarter would allow their steel to sing to its heart's content with every beat of their hammer against the blackened metal. It was here that the two smallest generals of the world's greatest legal guild and all around most important protector from evil people (in their minds anyway) would be taking advantage of their escape from duties and meetings to go and have a nice day out and about. Just the two of them, without a memo, file, or paper that needed their signature in sight. Grappa would be eating a skewer of fish and meat that they had gotten from a snack, savoring the taste of salmon and beef while her remaining skewers would rest in between her peach colored finger pits. "It's so nice to have some time to ourselves, huh?" she asked in between mouthfuls of food. "Gosh, it feels like we're always busy since Mom promoted us to Generals. Is this what being her is like?" Jellisha shrugged with her hands carrying a paper plate of fries and a massive burger with her, oozing with condiments and all the unhealthy goodness that a growing Exceed disguised as a human would need. She bit into her lunch for the afternoon without hesitation and would continue to ravenously consume her meal while the two twin siblings walked down the street without a care in the world. Their afternoon was just about to get more interesting, as both would soon find themselves being drawn towards a most interesting advertisement, located on the wall of one of the many stores that they had passed originally but not seen on the way over. It was Jellisha who would stop before the royal looking letter pinned to the corkboard. A solid royal red color with golden borders and bearing some strange royal seal in wax: a strange sigil that looked to be of some kind of weapon or another, or at least some strange design of what looked to be a wrench shoved between an arclight spanner and two gears. There were multiple pinned and looked to be encouraging for a passerby to take one, so the girl snatched one for herself while balancing a burger patty, fries, a plate and her sister's attention all at the same time. Her fingers undid the royal envelope and pulled out a sheet of paper with probably the most elegant don't she had seen in her life. Sans serif, neatly arranged, it even had that strange but fascinating new envelope smell. Grappa finally stopped rambling on enough to notice that Jellisha had quit laying attention towards her and was now focused on that strange note that lied in her hands.

"Whatcha got, Jellisha?" she asked curiously, poking her head in beside the girl's shoulder while reading along with the crimson eyed twin. The soft fabric of their uniforms cushioned the impact of her chin against the girl's shoulder. Jelisha appeared less than bothered by the this act, as it was one that both had done to one another often enough to see it as one of those sister-like things they had done with one another. The letter was adjusted to the side so that Grappa could read at the same speed as the crimson eyed twin.

You've been invited to the summoning of the Royal Family of Sumire from the East of Earthland. To celebrate the joining of our nations, we're holding a great festival of sorts, to display what the people of our great lands are capable of! If you're an amazing person, have some type of talent, or just love an audience, show the world your incredible skills! The main stage will be located at Crocus Park, just search for the blue and white decorations! We hope for everybody to show their Fiore spirit!"

The girls would give the letter a once through, with each eyeing one another once it had been read in full. Grappa's eyes would widen, almost bulging out of her cute little head. Jellisha knew that look too well, as if the whites were about to unleash a horde of teeth and swallow her whole, as if she were some sort of happy yet deranged little monster. "This is awesome! A show to see where the world's best and most awesome mages are! Oh, this is a great place to show GOLLI off now! Think of just how cool everyone will think it is." Had her tail been present, it would have been spinning wildly enough for the girl to achieve a steady altitude to fly over Crocus as a whole tenfold. Jellisha crossed her arms and would be pondering her sister's little instigation. While not entirely out of the realm of possibilities, there was still much work that would have to be done and in no less than a handful of hours to go. "First, his name isn't GOLLI, it's GOLIATH. Second, just what are we going to show? There's no weapons or anything on him just yet, and we still haven't had time to really think of what we could put inside of him." Grappa responded by giving her the ol' kitty eyes which were brought out when she really wanted something given to her. Her sister glared at her and with a scoff, would begin to put the letter away in her messenger bag. "Those aren't working on me this time, Grappa. We can go to the festival and get you popcorn but no competition." She turned and would move to spin around back the way they came before colliding into something. "Oof!" Jellisha spilled onto the ground alongside whomever that had run into her. The girl rubbed her head and had her eyes trained forward on the culprit.

A well dressed boy with onyx hair and wearing some fancy clothing would sit on the ground across from her. His eyes were a darker shade of red from hers which stood out from the blanket of hair covering his eyes. His hand shot to his forehead, where Jellisha's had made contact with. "Sorry!" the boy said in a smooth, distinguished tone that was as sweet and smooth as chocolate. Just the mere thought of it was enough for both girls to pay attention in a stunned silence. "I wasn't watching where I was going. We're new here and hadn't had a chance to really explore for a bit." Behind him, a pair of feet would come bounding up in a hurry. A smaller boy, his eyes a stunning dark blue with hair just as dark but styled into a messy ponytail, would stod behind him to help him up. "Brother! I told you not to run off like that! What will Mother and Father think if we're caught outside like this!" His attention might finally register that they were not alone. The two girls in front of him looked at the shy boy with intrigue while he would flounder out a response to his sibling's mistake. "N-No problem." Jellisha said, offering the red eyed boy 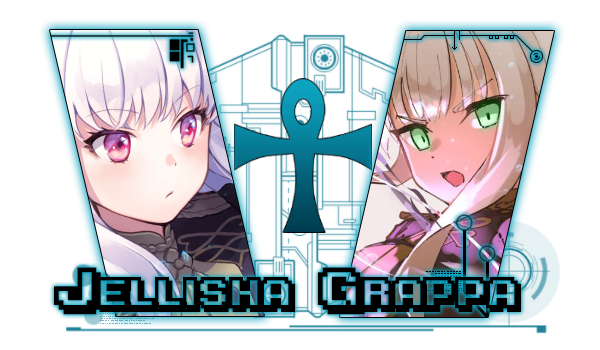