1437/1000 words || shion hoshizora || trauma is so fun
Shion sits in front of a tiny gravestone, just a little bigger than her fist. There is no name on it, and she wants to cry, because she is the reason they are dead. Her legs are crossed in front of her, and she's hanging her head so low, it looks painful. Her back is hunched slightly, shoulders almost touching her ears. She feels vulnerable without someone at her back, and suddenly she can't breathe---

The scarf around her neck is ripped off unceremoniously, the pile of fabric and dragon scales in a heap on her hand. Her other hand holds a letter, knuckles white from the force of her grip. The paper could rip, she knows, but she can't bring herself to care at this moment. She's trying to cram her emotions into a cup, but it's overflowing, and she can feel the wind on her neck and the cold, the rough stone texture under her, see the gravestones awash in cold, watery light in the edges of her vision, can feel the smooth but rough texture of her scarf, and suddenly, it's all too much.

But she can't do anything about it, because even though she can feel a panic attack creeping on her and phantom blood dripping from her fingers, she knows she deserves it. There was a reason she was at a gravestone in the Cursed Lands and not at a tavern, after all (under the ground is someone who's last moments had been consumed with pain). The scarf drops from her hands, scales catching on her skin. When she tugs the scarf off, it is covered in ruby droplets of blood. Her hands go to cup the back of her neck, and she bends over more, legs tucking neatly underneath her in a fluid motion. Her forehead touches the ground.

--She can feel the blood on her hands, arms, face, even, and she doesn't know why she's torturing the werewolf, but she knows how a kidney feels, knows what it feels like to tilt someone's face up and make them look at you while you're removing one of their organs, knows the sound of screams that are inhuman from the pain they're going through, knows the sounds of a voice filled with hate so deep it was almost unfathomable, whispering monster--

The pitch of her voice rose higher and higher. There was blood, so much blood, it was everywhere, and she could feel it running down her neck and arms and the side of her face---

It's not real, her brain insisted, but if it wasn't real, then why was she feeling it?! Shion's breath came in short gasps, panic dominating her thoughts. It was all encompassing, crushing, and she wanted to---to do something, but there was nothing she could do. Her body shook with something akin to fear, heart trying to beat out of her chest. It hurt, and she felt it, the overwhelming panic and fear, the feeling of death, then maybe she wouldn't feel so horrible--

What was left of the light of the sun was completely gone by the time her breathing returned to normal. She was on her side, curled in a fetal position, back against the tiny little gravestone. Her letter was miraculously untouched from the poison surrounding her in an anxious puddle, scarf wrapped around her wrist like a particularly bloody bracelet. Her head hurt, like someone had pounded a mallet with it. She almost wished someone had, because at least then the pain wouldn't last for so long.

It was easier now, to concentrate. The werewolf was dead because if she hadn't killed it, it would've killed her. It would have been her blood on its hands, and it wouldn't have even cared. It was just a werewolf, she'd done good, she'd done the right thing, she wasn't a monster. Kill or be killed, how could she have forgotten that? Polonium had taught her, and she'd promised to be good for him, hadn't she?

(she lied against the gravestone because they felt like scales (they were cold. It was just another reminder that Polonium was gone)

She squeezed her eyes shut and hugged her knees. It was cold, without a dragon curled around her. He used to glance at her when he thought she was sleeping, concern painting his features whenever she shivered (on purpose, so he would curl around her tighter). She pulled her knees closer, face pressed into her knees. She wanted to feel safe, but that wasn't an option, was it? She would never feel safe without Polonium (he was gone, dragons didn't exist).

The letter was clenched in her hand. It would be easy, she thought to herself, to burn it. It sounded easy, and it should have been, but it was so hard. There was symbolism here, somewhere, something about letting go, but at the moment, there was just her hand wrapped around a letter and her face pressed into her knees.

Dear Polonium, it said. That was the first line, and she'd read the letter so often she didn't even have to look at it anymore. It had been barely legible, with so many spelling mistakes she'd just pretended that it'd been written perfectly. Her eyes were dry, she told herself (the tear slowly making its way down her face proved otherwise).

Where are you? Did I do something wrong? I'm sorry. I'll do better next time. I swear I will. Just come back. Please. The people here always say please. I didn't understand what it meant but I do now. See? I can be good. Come back. I'm sorry I ate your share of the deer one time, if that's what this is about.

She'd been so young, and small, and just overall tiny. Five. She'd been five when Polonium had left her behind, because he wasn't dead---she would know. There would be something missing from her (there already was), from her very soul. He wasn't dead (she was awfully good at denial).

I'm writing to you again, Polonium, and I don't know why. I miss you. It's cold without you here, did you know? I got used to you sleeping around me, even though you said not to. You were right about you being gone one day, but couldn't you have put it off? You're a giant, roaring, and awesome dragon! You could have fought off anyone! You're not dead, right? I don't believe that you would be dead.

She sat up, trying to force up another sob. She would probably feel better. Then she wouldn't have near breakdowns in the woods. There was a stone in her chest, dragging her down. If she cried, it would be better, she could feel better. She ended up vomiting instead, the poison that she ingested daily melting through parts of the ground away. A hiss of pain escaped her mouth as the poison burned her mouth.

I caught my first rabbit. It was alive, even! But then everything I touched died, so now I have a ring of felled trees surrounding me, and two deer. I said sorry, which is another thing people here say. It's weird, isn't it? I dunno what sorry means, but I saw a person kill a different person, and then they said sorry.

Her hands piled dirt on top of the mess, trying to make it look at least semi-natural. It...didn't work, so she dropped the gravestone on top of it. Nope, still looked like she just buried something. Well, that was the best she could do.

Some people told me to "fuck off" when I asked them where I could sleep. I bet you would know what the means. You're big and strong and you're the awesomest dragon in the entire world! You wouldn't abandon me, you're going to come back.

Shion stood up, doing her best to ignore the fact that anxious botulinum toxin was dripping from her fingers. The letter in her hands slowly melted into mush.

I guess you really left me, huh? Why did you do that? Am I not good enough?

She released a sigh and stretched her arms behind her head (there was a pang in her chest and desperation in her eyes).

She walked out of the graveyard looking like she didn't have a care in the world, like she'd just had a weight partially lifted off of her (like she'd just come to terms with something).

STATISTICS
HP: x/y
MP: x/y
Spells Used: none
Abilities Active: I have no idea what this means
Weapons Equipped: Sharpened Animal Bone Shard
Monsters Killed: my inner demons but that’s it
Other Notes: Light is easy to love; show me your darkness.
Theme: Control 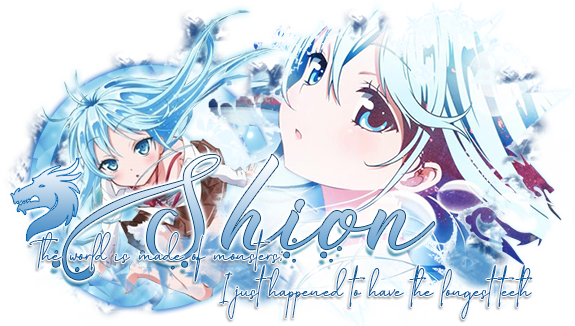