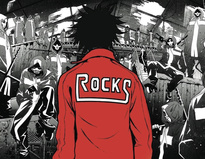 Ryuuto stared. Everything happened so fast it was hard to get a grasp for what happened. Before him was some sort of Goddess asking him to join forces with her in order to stop bad guys or something. As weird as this whole situation was, stopping bad guys or whatever didn't sound so bad. With a shrug Ryuuto took the application and began to look it over. Everything seemed normal at first, he had to fill out some personal information such as his name, age, height, weight, date of birth, gender, social security- wait a second..? With a rather confused facial expression he just filled it out anyway as he began to make his way a bit further down the application. This was beginning to get a bit weird as it started asking for personal information such as his favorite food. Well, he sure did enjoy eating garlic bread so he simply wrote that down. Favorite drink? This was easily answered with chocolate milk, the greatest drink of all time. It asked if he was right or left handed, his shoe size, as well as the length of hair. Ryuuto furrowed his eyebrows, just what was with these absurd questions? Keep in mind this was a job application in order to just beat up bad guys. Hold up, was this a parents permission slip attached to the back? Ryuuto rolled his eyes as he went back to the first page to continue furiously filling it out. To be honest Ryuuto hated paperwork, wanna know why? Paperwork literally has the word 'Work' in it and Ryuuto hated anything that had to do with work, especially hard work and work hard. Those were two phrases he absolutely despised. As he went along he began to realize how grueling filling this paper out was beginning to be. It asked him so many weird questions, even questioning about emergency contact information and oh boy all the small print he had to read. What was this about donating a kidney if needed? Ryuuto questioned the Goddess about the application. "Uhh.. excuse me, this doesnt really seem right..?" After showing the application to her she seemed a bit flustered before handing him a different one as she claimed this was a boyfriend application or something. Ryuuto merely groaned and rolled his eyes. Did he seriously do all of that hard work for nothing? Finally Ryuuto settled down and simply gave off a sigh as he got back to work again filling out paperwork. This one was much shorter and featured basic information as well as his contact information for the future. This application finished with a simple warning about the dangers and all that jazz. Finally Ryuuto signed the bottom of the paper and turned it back in to the goddess he met. "Alright here you go, I finished filling everything out as instructed. So I guess I'm here whenever you need me to uhh defeat bad guys or whatever. Anyway, deuces." And with that, Ryuuto took his leave the same way he entered.
« View previous topic · View next topic »