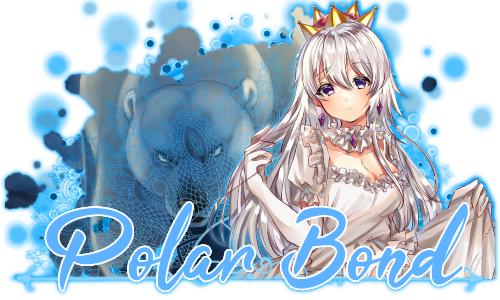 Magic Name: Polar Bond
Magic Type: Bond - Solitary - Associated Pet receives 3 additional abilities which are equal to the character's rank (Up to S)
Bond: Týr
Description: Polar Bond is the perfect melding of a ferocious wintery bear and a queen from an icy region. This magic is the embodiment of an icy pairing as it is filled with nothing but frost, snow, or ice, the spells that revolve around a polar bear and a mage of Iceberg descent. The two combine their strongest assets together to unleash their power upon the world and fight alongside one another.

Saraphina and Týr work either in tandem, or simultaneously, to let out their attacks. Týr mainly mainly uses mobility and defensive abilities with a few attacks in there, but overall Saraphina attacks more with the magic.

Unique Abilities:
~ D - Polar Connection: As Saraphina and Týr are both from cold areas, they have a connection that resonates well between them, increasing both of their strengths whenever they are a short distance from one another.
~ B - Polar Growl: Once per thread, Týr is able to let up a growl that will increase both his and Saraphina’s spell damage for a 5 posts.
~ S - Cold touch: As Saraphina and Týr are close enough to touch one another, they are able to heal one another.