Did I really have to deal with these people? 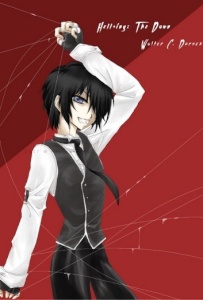 Did I really have to deal with these people?

Winter couldn’t believe the job that she was being forced to take. She was so strapped for cash and looking for a place to belong that she had no real choice but to take the damned job. The job was so pathetic. She had to help some annoying scared person to the train station and onto a train so he could get a better career. Why would she help someone who couldn’t help themselves?!

Still, she was supposed to do this job, she agreed to it, and so she would get the job done. As she approached the house, she saw the person in question, and he was struggling with his wife who was pushing him out of the door. Winter just rolled her eyes and pressed her fingers together in order to form the wires she wanted. Instantly she threw them around the man pulling the wires tightly around him. Thankfully they were soft, so that she didn’t have to injure him, nor did she cut his nice suit.

The wife looked at her with wide shocked eyes not believing what she was seeing. Still, she was about to say something when Winter turned and looked to her taking the tickets that were in the wife’s front apron pocket “There will be no trouble. I won’t hurt him, but he isn’t about to go anywhere, nor will I let him inconvenience me more than he already is.” With that she created her 8 wire tendrils and began to use them to carry/drag him away towards the train station.

She made her way to the station and the man began to thrash more, in turn Winter made the wires thicker, and larger until soon the man was in a cocoon with only his nose exposed. She walked up to the train and showed the tickets that the wife had purchased and given to her. The man looked at her very skeptically, but he was not anywhere near enough of a man to try and stop her from getting on board the train with her very, very reluctant passenger. As soon as she was inside of the cabin where she would be sitting, she sat down and looked at her bundle. Slowly pulling her wires away she uncovered the man’s face leaving the wires around his mouth.

She looked at him with great disdain on her face “Look here pal, you need to get ahold of yourself. You are just too pathetic, and it is disgusting. Do you think you look good for your wife? Huh? You think she likes knowing her husband is a gutless sissy without a spin?! No, you are an embarrassment to your wife, and she lives in shame with you. However, you have a chance to fix that. You want me to tell you how?”

The man looked as if he had been slapped, but he weakly nodded his head a slight glimmer of hope in his eyes. This was all Winter needed. She smiled at him and nodded her head once “Very good. Well, you can man up. Listen being in a train isn’t going to kill you, and it hasn’t yet, as you can see. We are moving, and we are heading off towards the destination. The next thing you can do is score this job. This job would allow you to make more money, and you would be able to give your wife a better quality of living. The first thing however is that you must grow a damned spine, you can’t be a man if you are afraid of simple trains! A man should never be afraid of such silly little things, and there should be no reason for you to be less than a man.”

Her charge seemed to kind of gather himself as he listened to Winter’s words, and she simply leaned back to relax waiting for the train ride to be well and truly done. While the time passed, she simply waited for a long time to get to the station in question. The moment they were there however, and the train’s cabin door was open she released her wires. The man like a bat out of hell or a rabbit off the starting line bolted and headed off to wherever he was going and whatever he was doing.

Winter rolled her eyes as she simply crossed her arms grateful that she had been paid in advance of this annoying. She just simply sat in the train seat and waited for it to head back to Magnolia so she could get on with her life and forget these pathetic creatures, and look to find her own path; which would hopefully lead her to a master/mistress to serve.

» I can't deal with this any longer.
» Dating me is the best deal out there!
» Deal with a Devil
» Deal with the Devil
»  Job: Guard the Secret Deal