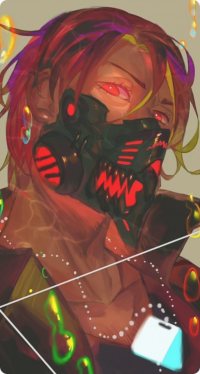 Are you sure you're ready for this?

Morte's words hissed in his mind, Artemis's eyes were shut and no one was around. But he could hear him clearly. Artemis shook his head, he was wearing the uniform provided to him by the guild. The red and black unclassified armour. Masking who he was, the guy he had hoped to be. Not this guy. This order his father had specifically given him, he knew there was no going back after this.

I can do this without you, you don't even need to see it. I can close you off.

He shook his head, he shouldn't. Doing that, giving Morte free reign, could lead to all sorts of horror. When he came too, the world could be in pieces and Artemis would have been oblivious to it.

You fear that I shall take over completely and have a little too much fun before I turn the reigns to you.

I know you will, you're a powerful demon, you can't help yourself. He thought in response, Morte laughed cruelly in his mild. Showing no signs of disagreeing with him.

What if we make a deal boy, a deal where once the job is done, I immediately give you back control.

Artemis who had been trembling on the spot froze, his heart was racing, under his armour, he was sweating. Already filled with the anxiety of what he was being ordered to do. Artemis was not ready to kill with his own hands, he knew that Morte knew that. Yet, cutting a deal with a demon, that hadn't worked so well the first time.

What could you possibly want?

Morte chuckled maliciously in response, Artemis had a sinking feeling, he knew what he wanted. He didn't have to say it, he wanted something Artemis had refused to give him many times. Morte wanted to eat the man's soul.

Artemis, see reason, you allow me this one delight, and I will give him a most blissful end. If you do it, it will be agonizing, gruesome and most likely scarring. Spare your mind and let me have this one meal.

Artemis winced, his breathing was raspy, and his hand trembled as he wrapped them around his head. He couldn't do this, he couldn't allow Morte to eat a soul. It was wrong. And yet, if he didn't. Artemis would have to kill him via his own volition, and his mind wasn't ready for that.
He took a slow breathe, steadying himself.

You'll return my body to me immediately after.

You have my word. Artemis gulped, he knew what that meant, a demon's promise was not something that could be broken. As part of their contract, if Morte said that, he meant it.
Artemis pushed himself off his feet and slowly made his way to the liquor store.


Morte stood at the top of the dorm rooms where Trevor Willet was staying, there was a party going on. That was good. He hid in the shadows of a doorway, out of sight. Until finally, he spotted the blonde teenager making his way out of his room. Cigarette packet and lighter in hand. Shutting the door behind him, as he headed towards the top of the stairs. Morte moved, darting behind him, grabbing him by the shoulder he spun him. Raising an open bottle of absynthe to his lips, he forced the man to drink gulp it down. Holding him still as he choked under the sudden influx of booze pouring down his throat. Then he pulled the drink away, allowing Trevor Willet to cough and splutter for a moment.

Morte pulled away the viel from his helmet, revealing a horrifying face. Instead of Artemis's face, was the face of a terrfying demon. With black scaly skin, and razor-sharp teeth. Bright yellow eyes that looked on hungrily. Trevor Willet froze in terror, unable to move or scream. Morte grabbed his cheeks, and pulled him in. Bringing his lips close to his, almost as though they were going to kiss but stopping short of touching lips. Slowly Trevor body went limp and from the space between their lips, a glowing light would shine for only a moment. Before fading away down Morte's throat. Morte pulled away, his yellow eyes glistening with satisfaction. With a little twist, he knocked Trevor gently off balance. His limp body fell over the railing, down the stairs, bones cracked all the way down. Morte walked down the stairs, until he arrived above Trevor's body. He dropped the body of absinthe next to him, allowing it to smash and the remaining alcohol to spill.

He recovered his face, and inside the armour, Artemis slowly began to awake. Looking down, his eyes widened in shock. As he saw Trevor's lifeless body beneath him. Morte had done it. From this point of view, it looked like Trevor's death had been caused by a drunken trip down a flight of stairs. Artemis gulped, knowing full well that this young mans soul was now inside of him. He turned, blinking away tears as he disappeared into the night.