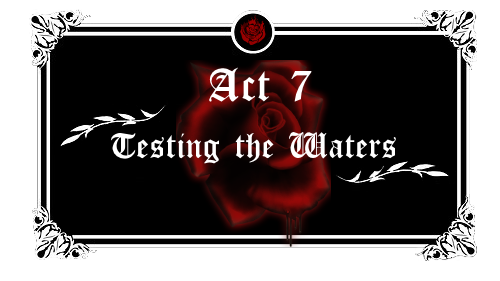 Job info:
Job Title: Testing the Horns of the Bull
Rank: C
Job Location: Anywhere within Fiore
Solo Word Count: 1500 words
Additional Requirements: Must be done solo.
Job Description: Having mastered the use of Great Horn, it is time to put Albafica's training to the test! Aldebaran sends him on a small trip around the Sanctuary to patrol the borders. His fellow disciples will be keeping an eye out for him, as Albafica's only allowed to use unnamed or Taurus-type techniques this time around.
Enemies: Low-ranking specters -- Armored grunts, beginners at best, sporting either blunt weaponry like maces or their fists to fight you off. Some of them may even know magic, so be careful. Most of these can be taken down with a few hits, or a single spell of the user's rank worth of damage.
Reward: 10k jewels and C-rank exp

Re: Testing the Waters

The morning sun had only just peeked across the horizon, casting light where there was darkness, and slowly but steadily warming the marble temples scattered across the lands of Sanctuary. As would become of a place devoted to training, to raising warriors, even now there were already a handful up and awake, readying themselves for yet another day of brutal training. Unique to these warriors was their physique, that could take a lot more than regular brawlers or martial artists could, all due to their inhumanly cruel training methods. Even children half Albafica's age were tormented with impossible exercises, threatened with death if they could not complete them. The teachers here never were known for their kindness during training; and especially not to those who quit prematurely. In war, or preparation of, they had no use of the faint of heart. Yet those that remained had adapted to the harsh lifestyle, and even found solace in it.

It were those people that now wandered the Sanctuary this early, looking for the best training spots, sparring partners or performing their morning routines. For Albafica, said routine did not involve others. Although he was still officially classed as one of the untitled warriors, he knew very well that he had already been given a title as successor. Even the sentient armor, the golden cloth of Pisces, had accepted him as its rightful owner. Yet rules had to be abided by, so he could not don it without permission, except in times of dire need. Such times had yet to pass, however. Yet as unofficial successor, Albafica had earned a single privilege none had dared take from him. Passage to the Sougokyu; the temple of the twin fish, and the final line of defence before reaching the goddess' palace. Although it was currently vacant, the temples that could be manned by their respective guardians had been manned. The reason that the azure-haired youth was now sitting on top of Sougokyu's roof was also that; to see what was going on below him, see how things were going before tending to the field of roses spreading across the temple's grounds.

These roses, despite their seemingly innocent, regular looks, were far more than just a field of flowers. Royal Demon Roses they were, a type of roses classed as extremely poisonous, and even lethal to those not resistant to its poison. In Sanctuary, only the Pisces saints tended to these roses, because their blood held an inborn immunity to poison. Those who took on the mantle pledged their lives to a solitary cause; remaining among these roses turned their blood into pure poison as well, which made these warriors of Pisces a danger to anyone who would draw near them. Mostly so when their blood had been spilled; which released the poisonous properties within the blood like a gas, at best viciously harming those they held dear. It was the reason that Albafica remained distant now he had returned. The temple was his playing ground, the gardens his battlefield; the roses his training partners. Every morning and evening he spent time at his master's grave within the garden, telling him about what had transpired during his years gone, and the Sanctuary down-below.

Perhaps a haphazard thing to do, but Albafica enjoyed being alone, as well as that he didn't wish to hog all of Aldebaran's free time to himself, while his own students could use it just as much. The fact Aldebaran's power was strong enough to protect himself from Albafica's poisonous blood put the young saint at ease, knowing he could still have some kind of social interaction with others. It was something, at least. The tip of the iceberg, if so to say, to the many things he wished to change about himself. Because that too was one of the reasons he had agreed to return to Sanctuary; to find himself anew before setting out again. He had duties, but as he was well aware, he couldn't fulfil them with his current power. His growth would be limited if he remained here, too. The boy sighed and leant back. Honestly, he was spending way too much time thinking about this. Action! That was what he needed! And be it as such that that was just the thing laying in wait for him.