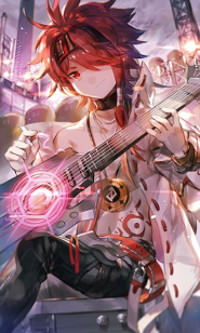 He rubbed his hands and breathed on them, feeling the temperature of these regions begin to affect him. It was quite cold in Talonia this time of the year. Nevertheless , he had a job to do. He sighed and adjusted his scarf so that it covered his face, not just his neck. Redhead never liked cold. Summer was much better in his mind. Leaving these thoughts aside, he walked out of the dark alley on the street lit by lamps. His employer should live nearby. Maybe he will be able warm himself up in his house. Looking at the address, he confirmed that it was the right street. Now Zeshin just needed to find the right house. Mage found it quite quickly, and to be honest, it had a sad vibe to it. Probably one of the reasons for this mission. Leaving it for later, the redhead went to the door and knocked.

"I'm coming!" He heard someone yelling, and a second later he could hear quick footsteps, slams and curses. A few seconds later, door's were opened by an old man. His clothes were definitely Japanese, and not very warm considering the weather. Being this close to that person, Zeshin could feel his power. The redhead couldn't really tell how strong he was, but definitely more powerful than him. Considering everything, the young man did the only thing that was right. He smiled.

"Hi! I'm Zeshin, mage form Crystal Swan. It was you who wanted to talk, right?" Slayer descendant asked, and held up a paper with information about job. He couldn't deny that it was an easy job, but hey... he had to start with something, right? No need to rush things. Hearing his question, grandpa nodded and invited him inside with a hand gesture.

"My name is Kurase and yes, it was me. But first  I will make us some tea, and then we will talk. You can go sit near the fireplace. It must be cold outside." The old man said, and went deeper inside the house. The boy shrugged at his hospitality and did as he was told. Seeing that there was carpet near the fireplace, he ignored chairs and sat on it. He preferred sitting on the floor anyway. It was more comfortable for him. Plus, that way redhead was closer to the fireplace. It wasn't long before retired mage returned with two cups of tea.

"This one is yours. I hope you don't mind drinking tea." Grandpa said and gave him one of two cups.
"Honestly, for this weather I would prefer hot chocolate, but I will take what I can get." Young mage said and sipped his tea, before hissing lightly. It was hot. Too hot. "Soo... Kurase-san, why would you hire someone for this kind of thing?"

"Well... You know, I'm getting old." Old man anwsered with a sigh and looked at his tea. "Many of my old friends have already left this world. Being mage isn't exactly safe lifestyle, but I'm sure you know it. I'm not even sure how much time I have left. That's why I wanted to pass on my knowledge. Years of wandering gave me some interesting and... enlightening stories. I hoped it could help someone... and I'm a little lonely." Grandpa ended with a smile.

Zeshin didn't say anything for a few seconds. He wasn't sure what he could say to cheer up Kurase. Then he remembered, that he was talking with someone who knew life, not some depressed teenager. "I kinda understand it." Redhead finally said with a nod and again sipped his tea. It was still hot, but not as much as before. Drinkable. "Then... How did your journey as mage start?" Hearing this question, old man smiled and began to tell his story.

The redhead was listening intently, considering this as a chance to know more things about being mage. Kurase story started slowly. He wasn't always guildless mage. Apparently, when he was young, he joined some small guild and did jobs for them. Apparently, that guild was very family like, which kinda explained his hospitality. Grandpa started from doing small jobs, which didn't even need magic. He had close friends, teammates and even a wife.

"Those were happier times. We didn't have to care about law, age, monsters and death. We were simply enjoying our lives in the guild. Unfortunately, these things never last."

When Kurase was thirty-something years old, his guild was attacked by band of monsters controlled by one mage.

"It was a massacre. Our guild wasn't very strong and had few members. Still, for one to be able to destroy the whole guild... we didn't believe it, even when we saw it with our own eyes. My friends, Guildmaster and teammates... they died. Only I and my wife survived because... I left them behind. Seeing no chances to win, I didn't want my wife to die. It was selfish of me. I understood it only when my wife left me. She couldn't look at someone who abandoned his comrades. She preferred dying, then living without them." Old man said with great sadness in his voice, but after a second he clenched his hands and fury entered his eyes. "After a few months, she heard about another similar massacre. I didn't want to get revenge for our comrades. I preferred living than dying for something as petty as revenge. My wife though different, and went alone to confront that demon. I didn't go after her immediately. After two days, I forced myself to follow her trail. And what I found? I found her dead body ripped apart by some monster. What's more... that monster was still here. You know what he told me? Oh, I remember you. You were that smart guy who fled. It seems you aren't so smart anymore. Just like your dead wife and dead child. It is a pity that it did not have time to be born. Killing fetuses is no fun." Old man finished through gritted teeth, clearly holding himself back from destroying something. In the meanwhile, Zeshin had mixed feelings. Sadness, anger and horror were some of them. He didn't know what to say, so he stayed silent. After a while, grandpa continued his story.

Apparently, he didn't know about this child. His wife didn't tell him. "Monster" that killed his wife and child knocked him out with words "I think you will suffer more if I leave you alive, coward." After that, Kurase spend years on training. He decided to kill that demon before he killed anymore people. It wasn't meant to be. Magic Council, hearing about monster expoits, quickly dealt with him. And so, old man lost his only purpose in life. He became depressed and spend 2 years in his house, leaving only to buy food. Finally, he was able to overcome depression with the help of his new friend, Albert. He was an adventurer, which decided to help people in any way he could. From this moment on, Kurase and Albert became partners and had many great adventures. They conquered dungeons, destroyed monsters and defended innocent people. His story wasn't as detailed as before. They were adventuring until old age got them. Albert died a few years ago, leaving Kurase alone. At the end, Zeshin learned a few things about the world.

"Protect people important to you at any cost."
"Don't kill, unless you have a good reason"
"You need power not to conquer, but to protect."
"Don't repeat my mistakes. Don't leave comrades behind and don't be a coward - even if smart.

Zeshin stretched in front of the doors, listening to the sound of his bones pooping. It was a long story, and night come a long time ago. Still, it wasn't problem for redhead. His guild mark took care of something as problematic as transportation. "Thanks for story, old man. I will be sure to remember your lessons about life." Young mage said to old mage with wide smile. Kurase was also smiling, and nodded his head at his words.

"Remember to visit me sometimes. It gets lonely without company and I still have a few years ahead of me. Good luck on your journey." The older man shook hands with Zeshin and gave him jewels for the job. After all, redhead still needed money so he couldn't exactly not take them. With that, young mage of the Crystal Swan waved his hand and disappeard, who knows where.