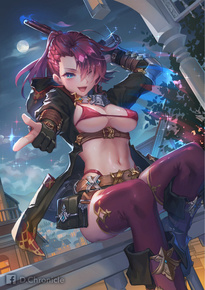 The town of Magnolia, for as long as it has been on the world map it has been known as a peaceful place where many of its citizens and fare travelers have come to engage in fun-filled festivals or simply to trade good for those seeking to gain profit for their wares. For others, this place was a town where young wizards seeking to gain fame or fortune gathered to make their name but the most prominent wizard gathering was a guild hailed as Fairy Tail, a guild known for its powerful and well-known wizards.

Valeria Faust, a young wizard with no name nor fortune was walking on a road filled with poppy flowers on both sides just right outside north of Magnolia Town, she had just traveled from a far-off place seeking to see this notorious guild for herself with utter excitement whilst she walked eating a skewer filled with bull meat and various vegetables she had packed while in the other town to curve her hunger for the long travel. As she finally reached the entrance to Magnolia she would give a wide grin as she was about to step into the world of wizards and magic for the first time. Ari felt the hair around her move as the wind flowed through it. As she looked past the buildings ahead of her, she saw a tiny building. It seemed to be the place that Ari had decided to meet her client. She wondered if there was another sent to the building to take the job, but she would only know once she stepped in. However, she waited for a few minutes, waiting to see if there were any strong magical forces around, but there weren't any that seemed unusual, or something Ari would care about. So, Ari began to walk forward towards the red bricked building, and looked right towards the door.

The color of the door seemed to be some sort of weird bright yellow, but Ari didn't have questions for it currently. However, the client might question her cat ears, or maybe even her tail. Either way, that was the entire reason why she hated asking people questions. Sometimes, too many questions that are asked upon someone, makes them feel almost unbearable, like you want to run as far away from them as possible. So, she just knocked on the door, and waited for the client to open it, so she could get past the formalities as fast as possible.

Ten minutes had passed since Valerie entered the town of Magnolia, with her being out of touch with a town for nearly a week living off of her leftovers and whatever small animal she could find within the journey to hunt and eat the smells closing in on her all-around hit her nose like a bee attracted to a flowers natural pollen, but the smell that hit her the most at the moment was the smell of fresh meat that was surely being seared over an open flame as it had a type of smokey smell to it, like a sheep being lead by its shepherd Valerie went with her strong  nose and followed it seemingly floating with every step she took as she had an idiotic happy grin plastered onto her face.

It didn't take her very long to spot the source of the smell as she approached a mini cart where a man was just as she had predicted searing meat over an open flame, with her nose being the driving force leading her at the moment she walked right up to the cart nearly drooling as she could practically taste the exquisite flavor of the meat on her tongue before it was even there, no longer willing to contain her hunger for the divine meat in front of her Valerie spoke up, "A piece of your best meat please~! With pay of course!"

Placing some money on the counter to show she was no thief the male cooking behind the cart smiled before slicing the meat into small chunks and slapping it onto a plastic plate before handing it over to Valerie whose eyes were sparkling with delight as drool somewhat dripped from the corner of her mouth as she took the plate into her hand, she took a few seconds to savor the smell of it once more before taking a piece into her hand and popping it into her mouth, it was at that moment that Valerie felt as if there were fireworks going off in her brain as the meat dominated all her tastebuds making her swoon over it as if she had been in love with it all her life.

Ari heard the creaking of wood as an middle aged man began to walk up towards the little yellow door that was built. He seemed to have brown hair, and wasn't too shabby in his looks. She was surprised someone like him would have lost a box of puppies, let alone have them. She eyed him up and down suspiciously as he stared at her. He clearly wasn't expecting a mage with cat ears, and a tail to be his hire. He raised his eyebrow up, but didn't feel like asking. Either way, he decided to introduce himself.

As he reached out his arm in a handshake, he said to her, "Well then, my name is Eric Liner. You should already know by now that I've lost my poor little puppies. They are extremely energetic, and quick as well. That's the reason why I still haven't able to get them. Without any magic, or extra capabilities, I don't think I'd be able to get them. So, that's why I asked you and one other mage to help. They should be here sometime soon, but for right now I'm not sure where they are. As he peeked out through the door, Ari positioned herself to make it easier for him as he moved his head in each direction, searching for her partner. Ari wondered why the person was late, but that was no matter now. This job wasn't going to get any worse, because after all, they are just puppies. So, she stood there and waited for her apparent partner.