The Fox and the Mouse [Job] The Fox and the Mouse [Job]

Job:
Job: Mice and Mage!
Rank: Rank D
Player Requirements: Min of 2 member and max of 5 member, Rank of D or higher, min 150 word per post, min of 5 posts per player.
Job Requirements: must have at least one rank D mage, don't wreck the house. Remove or kill all the mice within the house.
Location: Oak Town
Description: Mice are taking over a lovely couples house. They are crawling throughout the house and around 10 mice a day can be seen scurrying about. They need help in getting rid of them and making sure that they won't return.
Prize: 500 jewels per member. No reward if the house is damaged.

“Haha! Gotta be quicker than that!” The fox yelled as she gracefully slid underneath a wooden fence just as the man’s hand came reaching through, barely missing her scarf! “Grr! I swear when I catch you fox you’ll be a rug! Y’hear me!? A RUG!” He yelled after her with a raised fist, his head and clothes soaking wet. Narumi couldn’t help but giggle to herself hearing his empty threats fade into the distance as she continued to run down the alleyways. Wow. What a fun and exciting way to spend the afternoon! Narumi was beginning to think that all these people were very different, despite seeming similar when she had first encountered them. But the look on his face after her latest prank was priceless! She couldn’t contain herself when the man and his friend just walked right into her little ‘trap’! The bucket of water falling on top of him! She was a genius. Surely only someone with her smarts could’ve thought up something as clever as that. These humans could take a note or two. Unfortunately the effects of her own joke caused the Kitsune to laugh uncontrollably from her hidden perch, and the man had quickly caught on. Luckily though, she was fast. Too fast for him, anyways.

The kitsune had reached one of the main streets of Oak Town. A few people trailing the sides while some carts were trotting down the middle. Another beautiful day! This world was surely entertaining! Maybe she could find something else to do to kill the afternoon. Maybe pull another prank? Her mind began to wander as Narumi put her hands behind her head and meandered down the street. That’s when her keen fox ears picked up something near her.
“I told you I’ve had it! I will not be going into that house until those vermin are dealt with!”
“Please just listen to me, Jess!”
“I’ll say it a hundred more times if I have too! I will not share my living space with mice!”
Now this seemed interesting.
“Excuse me miss, I couldn’t help but overhear you were having a little trouble?” Narumi chimed in somewhat unexpectedly. Putting her hands behind her back as she leaned forward with a mischievous grin. “My wife is terrified of mice. And it turns out our house just happens to be infested with mice.” The older man said, scratching the back of his neck. Narumi simply chuckled. “Fear not, I got this!”

Inside the house seemed fairly normal. It was a cozy, older styled cottage looking house, but then again, what was expected in one of the older towns in Fiore. Not taking too much time to look around, Narumi simply used her enhanced senses to sniff out the area a bit. Her ears twitched slightly as she listened. All she needed to do was track down the mice and stop them in their tracks! Easy enough, right?

“Get back her- WAUUUH!” She tripped around the corner of the table and fell splat on her stomach. Ow. “Grr. I swear I’ll make you suffer for that!” She yelled angrily just as the mouse scurried underneath the couch in the living room. “OI! I WASN’T FINISHED YET!” SHe quickly got back to her feet and ran towards the couch, body slamming the side. Luckily her plan had worked and the mouse gave a terrifying squeak and scurried out with fear! “Oho! You’re not getting away this time!” She’d vault over the couch and roll across the wooden floor straight into a tall clock. The mouse squealed and changed directions instantly just as the clock began to lose balance. “Huh? Oh, w- wait!" She said in a panic as the massive clock tipped straight towards her. Reacting instantly, Narumi rolled out of the way as it slammed on the ground. She shook her head to clear it for a moment, and that’s when her ears picked up the squeaking yet again. Except this time it didn’t seem to be running away in a panic. She turned curiously to see the mouse’s tail stuck underneath the clock. That gotta hurt. “Ooo.. Sorry buddy.” She whispered, completely forgetting what she had been hired to do for a minute. “But I gotta get you outta here!” 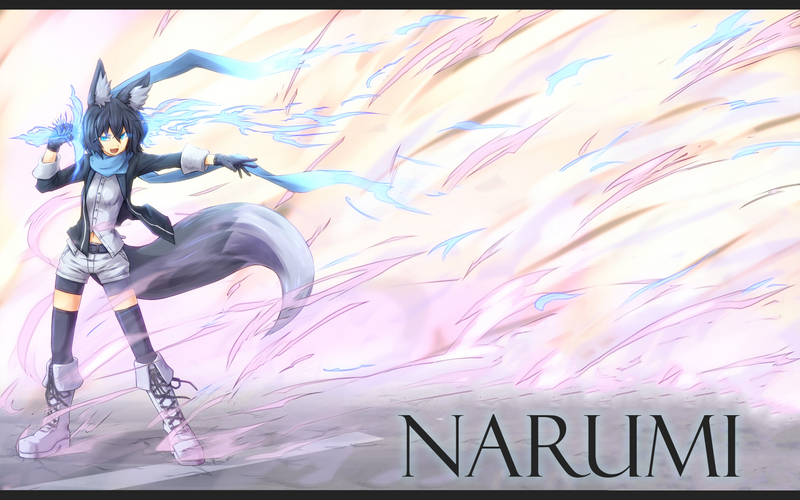