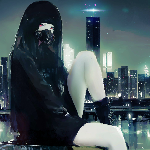 "The waterfall feels quite warm, Rain! We should come here more often, I love the swings!" Drip would exclaim, as her voice would echo across the small body of water they were each sitting upon. There was a beautiful oak tree spanning across the sky, nearing a giant waterfall that was produced by mountains that stretched as high as the eyes could see. The mountains were definitely not as big as what Rain saw as her new home's range, but it was definitely a beauty to see. From this large tree of oak produced three swings that were suspended over a shallow pool of water, which would only cause the bottom of the feet to be moisturized if came in contact with. The gang was in Talonia, a town labeled the gathering place of guildless mages, a place in which they had never been before. They were sitting upon the exterior of the town, away from the dim lighting that was produced from all of the shops and houses that stayed lit during the nighttime. For it was now 2:00 in the morning, Rain and her companions each sat on singular swings above the small body of water and in-front of the waterfall that misted water onto their backs behind them. The setting was gorgeous, even in Rain's opinion, as it was elevated by stone walls and separated from most of the town besides a few trails that lead to it.

The swings were in a triangular shape, one leading father from the waterfall than the other two. This was perfect, as Rain was the leader of the three, and the other two silently sat behind and did their own thing. Drip and Drop's personalities definitely showed by the way they were sitting, as Drip was quickly swinging back and forth and enjoying herself while Drop sat quietly and barely swung while looking at Rain's iLac. He was scrolling through his social media feed of rather revealing photos of women, and being what some would label as a 'thirst-trap,' a few of his images were in the mix. They both wore solid black along-side Rain, the only exception being that their faces did not have a rather large accessory upon them. For Rain had on a large gas-mask, which was black and matched her hoodie-dress with a rather offensive word plastered across in neat yet grunge-styled handwriting. Her hair was straightened and all the way down, nearly touching the water as she slowly swung. Her black and silk socks purely matched her platform-sneakers under them, adding about an inch of height to her already tall figure. She looked simply stunning in her red eyes, while she would also look rather intimidating to some. Her typical box in which she stored her tarot cards was attached to a small buckle in this hoodie, along with her hair-pin.

"I'm glad you enjoy it here, Drip... I do as well." Rain would tell the white-haired girl in her mind, as she would giggle and continue swinging in a happy manner. To the eyes of anyone else passing through, they would only see Rain, accompanied by two swings moving by what appeared to be their own. Rain held a chalice of red wine and slowly sipped from it, removing her mask each time she would do such an action. She was too lazy to kill any hikers at this moment, for she brought her pets here to enjoy themselves and the nature around them. She had recently been treating them better as she traveled, as she began to realize the horrible things she had been doing to Drip during her life. She disliked the good, but she knew that if she were to accept Drip for who she was, she would be able to stay by her side forever. That was soon the case, as Drip regained all of her joy and respect and lived her life to the best of her ability to in Rain's orders. As for Drop, he was rather angry that his pedestal was now met by his twin's, but he was also glad that she was no longer abused. For now they would all swing, as Rain would peer into the night sky and silently watch the stars twinkle around the skylines.
job link: ❀ || signup: ❀
► kaigra ◄
_____________________________________________________________________________________
⛧ my one, it lingers when we're done ⛧