A Story In Which We Drink Booze and Kick Ass

A Story In Which We Drink Booze and Kick Ass 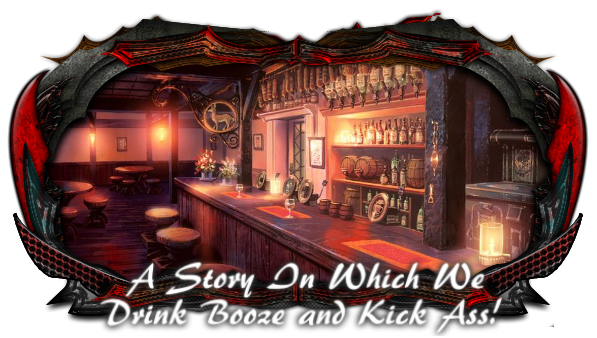 The streets of Crocus were awfully crowded for the time of day, even if it was about lunchtime on such a dreary day. Kenna found herself strolling through the streets at first, but ended up elbowing her way through a sudden explosion of people that conveniently had decided to impede the entrance to the street branching off from the main street where she had to go. Once everything was said and done and the Etherborn had at last gotten through the crowd, she sighed in relief as the feeling of being a sardine in a can faded away, basically as soon as she had gotten through the rowdy sea of people. For some reason larger crowds of people annoyed her... especially when they were in her way, blocking her path. But anyway, ‘twas not that she hadn’t gone through these situations before, so all the Etherborn could do was suck it up and deal with it. Not her favorite thing to do though. She huffed a few cussing words underneath her breath and continued down the smaller street, staring at the clouds in the distance that seemed to gather in a disturbing shade of grey. ”Of course…” The ravenhaired maiden sighed as she averted her eyes back unto the cobblestone street before her. ”On my day off rain is bound to happen. Every. Single. Time.” While letting another sigh escape her lips the young maiden stepped up her pace, not wanting to be caught by the incoming cumuli before arriving at her destination.

Said destination, a local bar known as the ‘Midnite Cruiser’, had recently been relocated and thus had sent out flyers for its grand reopening. Kenna somehow felt the name sound somewhat familiar and, since she had nothing better to do, decided to give herself a break and actually go out for a bit. She did not feel for spending her time locked up in her room. Not anymore. She’d spent weeks locking herself up, away from the outside world, after the events of Sabertooth’s battle against the gods who destroyed their beloved floating guild. Thousands of innocent civilians in Ace of Spades were saved from their impending doom by Kite Wilhelm, who as a last resort blew up the plummeting guild as to save the town beneath. She wondered what would’ve happened had the earthquake that had damaged the crystal had not been so strong. Would the crystal still have been damaged? And would the guild perhaps have plummeted to its demise when no-one was around to save the town or the guild? Kenna shook the thought off her mind. No, they were lucky things had turned out the way they did… even if it meant having to lose the love of her life to Prometheus. Her heart tensed and for a moment her chest seemed to shrink as the pressuring feeling overthrew her current emotion. She still missed him. Dearly. Mashyuu had been the only permanent thing in this new life. The first person she’d dared to love again, yet was brutally taken away from her. Kenna felt herself giving in to the darkness she’d so desperately tried to crawl out of and exhaled abruptly as she ceased her step. ”Wherever he is now… I doubt he’d want me to stay like this. I’ll live on and live life in his stead. But first; might as well get drunk.”

And with that intent she turned 90 degrees, faced the large wooden door before her and entered a large hallway leading down. The further she went the louder the noise become of a bustling crowd. Music arose as well and before she knew it Kenna had walked into the newly-opened Midnite Cruiser. Surprised by the amount of visitors of every age and gender present; the counter was hidden behind a wall of broad backs talking banter and laughing, several larger round tables had various games starting, from simple dice throwing to poker. Even a round of arm-wrestling in the back of the corner was present. Keenly noticed when out of nowhere a man twice her size was thrown asunder and banged unto the wooden floor, followed by a bountiful laughter from those around him. Kenna smiled. For some reason unknown to her she found this rather amusing; she even felt at ease among these broad-backed men. Making her way to the counter and ordering a bourbon, the ravenhaired Sabertooth mage slowly scanned the rest of the bar for anything interesting as she awaited her drink to arrive.
_____________________________________________________________________________________

Re: A Story In Which We Drink Booze and Kick Ass