When this job showed up on the job board, there had been a very large and mixed discussion about it amongst Shea’s fellows on who would take it. Not that many wanted to do it, the discussion was actually about who would be the ‘victim’. So far all of the male mages had backed out, leaving the female mages to bicker. The Songstress was rather new to the guild so they didn’t think of her right away, but when they did suddenly all eye were on the half-elf.

It didn’t take much begging to get her to go. Actually the begging wasent needed, Shea decided to volunteer as soon as the argument started. She just thought their reactions were funny so let things stew for awhile. Honestly though, she didn’t see the problem, this job actually sounded like a lot of fun! It was also admittedly something the woman was good back. Yup, if people were honest about it, most would admit ecchi was definitely one way to describe the beautiful half elf.

With that settled the fledgling mage headed to Clea Village.

Shea had honestly expected the place to be in some sort of chaos, but instead at arriving in the town square the people looked absolutely depressed. All the shops seemed to either be selling ecchi based things or had some sort in innuendo theme about it yet the folks here looked as if they wanted to be selling literally anything else.

Many looked up as she walked around looking at various items. All gave her body an up-down but had various reactions. Most simply looked more depressed, but some had burst into tears seeing Shea’s hourglass curves, even if they were beauties themselves. Well at least this proved the job description to be true, these people really did have the limbo dragged from them an obviously by the themes that were an important part of their culture.

With that in mind, Shea headed to where she guessed was the source of the problem, figures nearby a rainbow portal and behind them a creaking bed.

Shea was approached by three men. “We are the Anti Nosebleed Team! To move forward you must make all of us have a nose bleed worthy of true ecchi!” One of them proclaimed and they all posed with guns that appeared to have tissues coming out of them.

“Hmmm, okay then.” Shea said, one arm folded under her breasts, the other on her chin thoughtfully. She then crossed both arms behind her back and leaned forward, showing off her generous cleavage. “But are you sure you boys are ready for this?”

They were already blushing. The songstress then drags a hand up along her thigh, shifting the shirt a little to show her garters and a tease of panties. The men peered forward in anticipation, but the half-elf had already moved on, dragging the hand teasingly up her toned stomach, ‘accidentally’ fondling her breasts a bit, then up to the side of her face, sending them a sexy side glace before flicking some purple hair out of her way. “No touching though.” She says to them teasingly.

One screams in frustration at the tease-job and shoots napkins at the woman, but she simply leaps into the air and lands on a nearby thin lamppost. The mage then wraps one leg around the post and like a pole dancer uses it to twirl to the bottom, then does the splits on the ground, revealing more thigh skin. She then puts the post to her back and grabs it behind her before bending a bit, showing off a proactive position. Shea then gets up and tease-twirls around the pole using her one legs, finishing off with the pole in-between her breasts, one eye sending the men a ‘come-hither’ look and adding a few magical sparkles to the mix.

It was then she noticed that the men were in a puddle of their own nose-blood. “Huh. That was easy.” The sexy maiden says with almost disappointment, then moves on.

Shea went onto the next challenge, which consisted of a girl with an even more volumus body than Shea and wearing some sort of uniform. Oh, and she was on a platform of some sort.

“Hahaha, welcome challenger! I am Boobxers, and I am not as weak as those weaklings.” The woman boasts, making her breasts bounced with the ferocity of it. “To defeat me you must don a sexy swimsuit or cosplay and beat me in a battle of boobs against boobs or butt against butt.” Boobxers explains, dramatically gesturing to a nearby shop with a sign saying those outfits for this match will be free.

Shea smiles serenely at the idea of free clothes and heads over, quickly picking out a good bathing suite for mobility, which means there was very little material. It was also a tad small for her, but it would work. 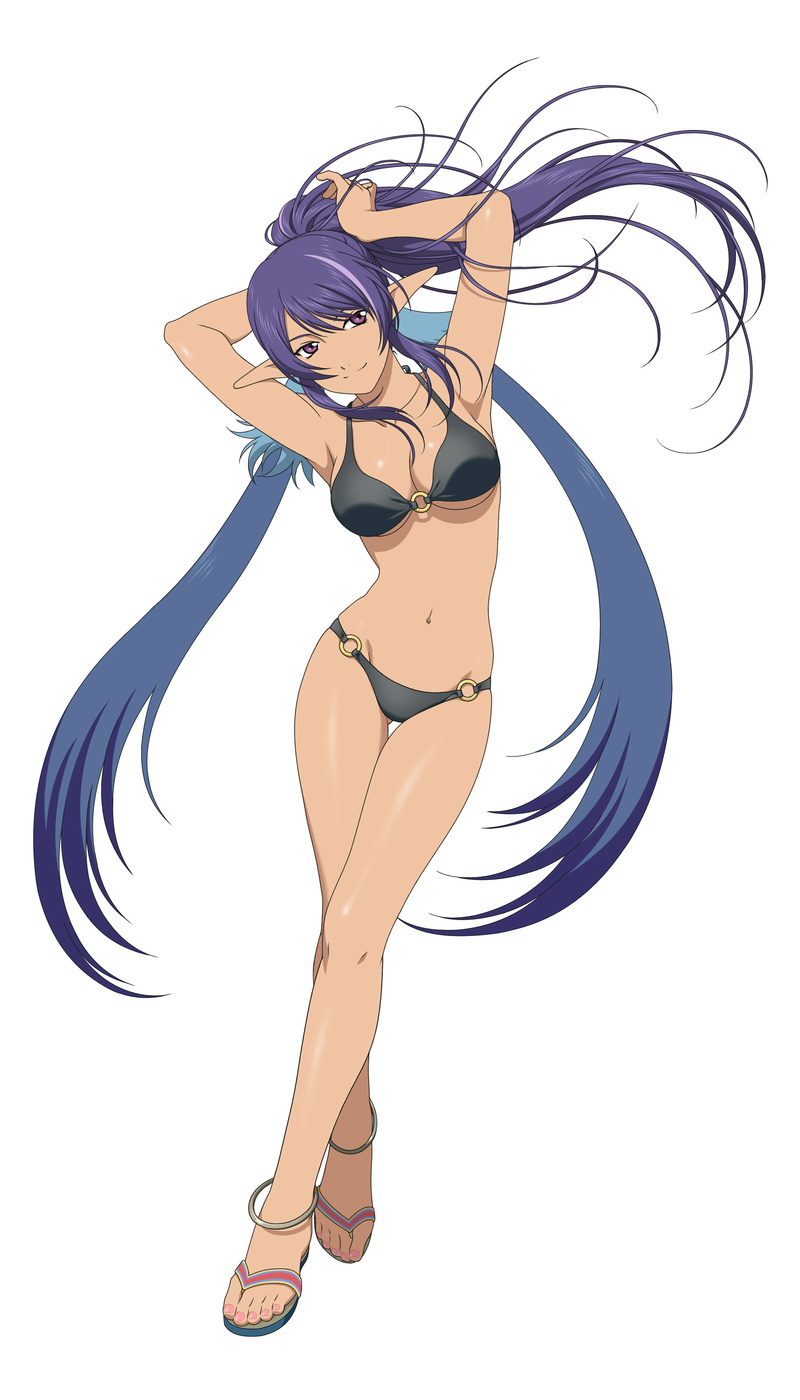 Sauntering out into the open, Shea smiles at the other woman, who only wildly grins back. They confirm that they are fighting each other with boobs, then bow with thier chests jiggling on the way. Then the battle starts

The two rush at each other and bang their breasts against the others, completely unabashed at their actions. Only superior size and strength will tell who wins.

Shea, unfortunately, lost. The woman pouted as she laid on the ground after being pushed off of the platform by the other woman’s superior cleavage. Her bathing suite was also ruined, showing off more skin than most would probably be comfortable with. Shea just vowed to buy the sae bikini before she left the town. 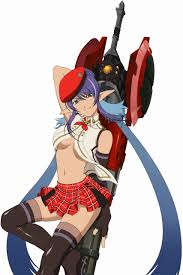 With that positive thought in mind, Shea entered the shop again, this coming out with a more school girl or army like clothes, paired with an oversized gun as a prop. The skirt was very short and the shirt obviously showed she wasn’t wearing a bra, but overall the opera singer liked it.

Shea got onto the platform again, this time announcing they were competing with butts instead. Boobxers agreed and after they bowed the battle began.

Shea, thankfully, won causing the busty woman to fall off the side of the platform. The singer may or may not have been leaning on her prop item for it, but thankfully the other contestant didn’t seem to notice.

Getting herself straight, the cloth of Shea’s shirt accidentally caught on the gun, giving some people a pretty little peek at her full breasts. The Anti Nose Bleed Crew from before had just recovered, but at that sight, their nose bleeds sent them flying.

“You cheated! I demand a rematch!” A voice shrieked. Ooops, look like she did notice. Well, Shea would give the woman what she wanted, this match was rather fun anyways. The women bowed to each other, and prop gun away they prepared for another butt attack.

At this wondrous sight and more tasteful side boobs, the three men erupted into more nosebleeds, making all those around them wonder how they haven’t died of blood loss yet. The women were still fighting away at their battle, victory undecided.

To Shea’s disappointment, Boobxers won again. Oh well, at least this means Shea got to wear more neat outfits. She was definitely going to buy that last one or course.

This time Shea went for the wicked witch look, which made her feel as if it was Halloween. 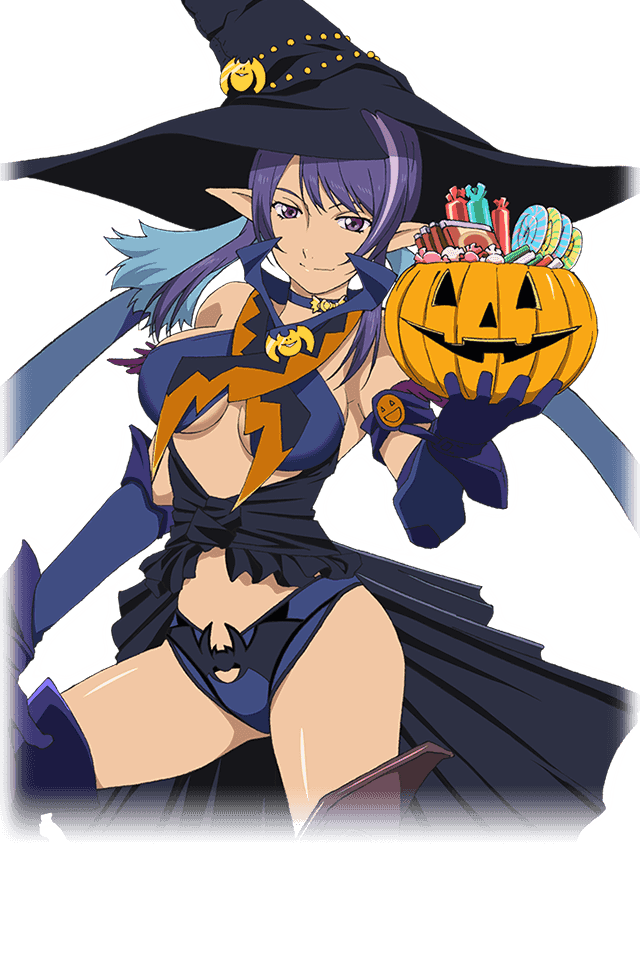 Knowing what to do now by heart, the two women bowed and fought with their boobs this time.

Finally, Shea had won. A downtrodden Boobxers told Shea she may keep the free outfits if only if she wears it until she reaches the bed. The song maiden happily agreed and marched off to the next challenge in her witch costume.

The next ‘boss’ seemed to be a giant robot made of underwear. Huh.

“I am Panty Bot. Fear me. I will steal your underwear and replace it with others. Fear me.” It said in a monotone voice, then lashed out at Shea before she could react. The next moment the robot had a thong in its grasp. Thankfully it didn’t seem to tear at Shea’s clothes, or else she might have gotten mad. Maybe.

Instead, she just looked unhappy at the thing stealing her underwear and leaped toward it with the intent of getting it back, unashamed at the idea she was technically commando.

“I will now replace your underwear with troll boxers. Fear me.” It says and pulls out a pair of said boxers. Shea figured that they would net look good on her, so avoided getting them anywhere near enough to her lady areas for Pany Bot to put them on while the woman chased her own underwear around.

“Urk. Not enough new panties. You have defeated me. Self destructing. Fear me.” The Pany Bot said, then it actually did self destruct, sending panties flying everywhere.

Shea went over and calmly retrieved her own underwear, storing it away to put back on later. She also spotted many other cute panties, and after inspecting them and determining their cleanliness, took them for herself while vowing the clean them later. Then she went on to the final boss, the bed.

At the cursed bed there seemed to be something naughty going from the moans and groans along with the creaking on the said bed. They also both sounded like men. Hot. Wondering how to win this fight, Shea figured it was like the others, by beating them at their own game.

Spotting a yaoi magazine nearby Shea smiled to herself and picked it up, flipped to a story she liked, and began reading aloud. She also added some things she thought would bring more… flavour. As she continued to read the noises and movements slowed, and finally stopped. Soon two eyes could be seen from under the covers, clouded with lust. As she neared the finale the bed began to shiver and as she reached the climax, so did the bed, breaking cleanly in two and ending the spell like the good witch Shea was dressed up as.

Out came tumbling the two men, one dressed up as Julius Seas (to Shea’s absolute glee, she was definitely telling her vice president about this), the other of a man Shea recognized as dressed up as a mage from Golden Phoenix. Broken from the spell and utterly beaten at being hot at yaoi, Shea lead the two men to the portal and clapped supportively as they kissed while going through it.

Leaving with her free outfits, panties, and the newly renewed lustful cheers of the villagers, Shea figured this was a very successful and enjoyable job. She couldn’t wait to tell her co-workers about it.