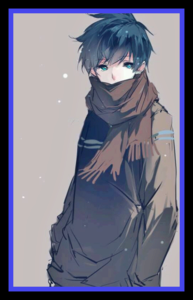 Ricken had arrived in Oak Town and was currently at the train station, he had shortly just arrived  to meet his partner for this job, he didn't know much about them besides the name, Jiyu. He didn't know how much time was left until the attacks would start but he was close enough that he could hear if any trouble was starting, so far all was calm.

Ricken took a seat at a small bench and pulled out the job flyer he had taken. The more Ricken re-read the job flyer, the more he got worried about his success on this mission... He was still a D rank mage after-all, he could get seriously hurt here... Ricken knew that he had to do this though, he couldn't just abandon this mission and leave it up to his partner.

Ricken pulled out his spirit keys and began to think of any good combination that might be effective against fire magic, with no water spirit he may need to rely on the speed of his spirits instead. What if the mages over power him? Would he just be forced to flee? What if his partner got hurt? Ricken had asked many question over and over again in his head, this was his first seriously dangerous mission after all...

Ricken sighed and sat back on the bench and looked towards the market anxious of any sign of activity. Ricken had hoped Jiyu would show up soon, atleast before any commission starts in the market...

The wind mage had taken a job after reading half the flyer again and she would regret it later when she looked ridiculous in front of D ranked mage when she was an A ranked one. Of course though? People could not help what they were afraid of and she had very valid reasons for her fear. Right now though she did not know if the slip up coming up, so she was walking rather happily with her Kitsune companion, Makoto, sitting on her shoulder contently. Hopefully her partner was there, because while the mage could be patient when required to be, she hated having to do so, considering she was a dog who wanted to just run along on her hunt. When had she started giving into that? She supposed when she stopped seeing herself as human, but since she was no human, that was all just alright, wasn’t it. Heck anyone who looked at the girls jet black ebony hair with orange eye lights, her odd eyes, elfin ears, claws and most of all her large fluffy tail, one glance told you that she was not anything near human, so she started seeing no reason to pretend to be one.

Ricken rushed into town beside Jiyu, he took note of the smell, it smelled like the smoke of burning wood. He looked towards the market area and noticed 5 wizards, 2 seemed to be a light red cloth and 3 were dressed in dark red clothes with flame symbols on the chest. They were all slinging fire towards the market stalls and fleeing people, no one seemed injured yet but if the attack continued that would quickly change.

Ricken brought out one his celestial key for squire; a bright light flashed and the spirit was summoned forth. Ricken decided it might be wiser for him to take out the weaker wizards and let his Jiyu handle the stronger ones. This was after all Rickens first "real" fight.

He ran through flames with his spirit by his side, searching for the wizards who caused this destruction. He stopped when he noticed two wizards standing by casting fire magic wildly around the area laughing manically. Ricken flinched at every shot, He then nodded at his spirit and rushed out towards the wizards. Ricken pulled back a little bit to let his spirit handle the action...

[ignore the below dice roll]

The member 'Ricken' has done the following action : Dice Rolls