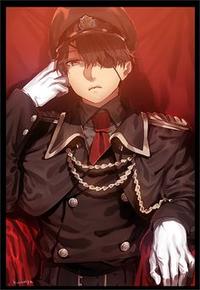 Ald Ruhn: Alito's embassy. Here, the guildless assembled, though Alito had yet to introduce himself to most. Finally, his magic could be unsuppressed as Ald Ruhn could handle the magic he possessed. It was not a palace that could decay, you see, while it was also inanimate; material that cannot be killed, so to speak. Perhaps Alito would take full control of the palace someday, when he was much stronger and fearsome to even the mightiest outside this exclusive kingdom. Alas, Alito was not here to actually make use of his embassy, but rather arrange a meeting with a rumoured lady whose power overwhelmed the vast majority of the homeless wizards upon these grounds- maybe Alito, as well. Albeit, he did not mind. There was also the encounter with Aegis, after all, and he surely left Alito with a challenge.

stuck in time, there's no why
tag: @alito // words: 731 // notes: bottom
"Has an Alito Kizoku checked in?" A question directed at the lady behind the small, rickety table in the corner of the foyer of Ald Ruhn - something that made her jump a little in her seat, set up her thick glasses up the bridge of her nose and stare right ahead into an impatient frown on Via Vicario's face.

"Look, lady, I asked if-" The inquisitive woman began again, her voice already having assumed an irritable tone and her fingers drumming along the table as she towered over the other female.

"J-just a second, ma'am!" The sentence cut through Via's repetition as the woman she addressed opened up half a dozen files to scramble through piles and piles of scrawny names and signatures. Only after a couple minutes later did she look up Via in the eye and nod in confirmation, "He came in an hour ago."

"Great." A word uttered in a tone much less lethal than the one before, as satisfaction brought up a small upturn on her lips. The blue-haired visitor signed her own alias into a book; nothing but the initial of her first name, and swept her vision around for any sign of a male figure in anticipation. A sigh escaped her as she turned back to the female behind the visitors' table, "Choose one option - A. Note down that you're not paid for dozing off at work, or B. Get fired."

With that, Via took off into the little crowd of chattering guildless mages. Or as she liked to call them in her own head, nobody's mages, nobody's slaves. A set of men and women trained in the molding of the arcane but refusing to join the fray of their own kind that streamlined into impromptu offices; magic guilds. Just fancy little mansions with a request board attached to a wall and a smooth circulation of beer bottles. The woman had seen many of them herself over the years - or centuries - building and crumbling on the hopes and dreams of creators and destroyers alike. End of the day, they were all just a few inches of memories - a smaller replica of what the world was; a storage of memories and experiences.

'But alas, the chained would never quite realize that they exchanged the colossal picture of the universe for free roof and booze, eh?'

'Nah. Nope. Tch. Sì.'
The fourth person that walked into the palace of Ald Ruhn about an hour ago met the description V had of her host with perfect grace. Short, brown hair, and a rather prominent facial accessory; an eye-patch. With a slight nod of gratification, the woman attached her consciousness to his timeline, breezing through his activities within the refuge of the guildless and ending up exactly behind his current position. Via has actually managed to course through present and the vision of the past at the same time, thus perfectly ceasing in the amber of the present.

Just in time to eavesdrop into what seemed like the beginning of a rambling monologue; which she didn't disturb in the least from her position behind the young man. In fact, even if she could, she wouldn't want to. One is always oneself in the absence of others, obviously; for solitude may tease out the flecks that one never knew existed within them. And Via was obviously here to learn about the man who'd invited her so intrepidly - study him in-person to sate her amusement. An ad libitum summoning by some casual mage wasn't an everyday affair for the lady, after all.

A voice? Just as Alito thought he was alone during his speech, it seemed someone had eavesdropped. Well, considering the voice did not seem like a threat (at least for now), Alito had nothing to worry about. "I prefer to be a valiant one." Alito commented, "A tragic hero, if you may." The woman was there with a handshake offered, while because her arrival to Ald Ruhn appeared quite interesting in the child of Ankhseram's eyes, he accepted this lawful act, but only for a couple seconds before letting go. "You must be the person I've been looking for." Alito remarked, "My people have informed me of one with great power, you see, and within you, I sense a force far better than others upon these grounds." Alito giggled a bit after these comments. It had been a while since someone notably strong had the opportunity of meeting him; a cursed male whose only strength was the ability to kill.

"You and I are very much alike, you know?" Alito added, "We both choose not to associate ourselves with guilds, while the people who live in our palace strive to become comparable to our own being. I assume you know what I'm capable of, while you I have yet to learn about, hence this little meeting." The boy decided to pace a bit while the woman was still around to converse with him. It was honestly a pleasure to meet yet another individual who, even for someone who had lived for centuries, had no knowledge of; to be hidden from somebody who typical observes all of humanity's most unique. "So, how has your day been? Eventful? Unprogressive? Complicated?" Alito asked, "Mine has been quite boring, though perhaps this encounter can change all of that."

Alito awaited some sort of response. He was eager to learn about what made this lady so high and mighty compared to other wizards, or rather some stories that could hopefully amuse him. Ald Ruhn was one of the only things that could do that, anyway, which bothered Alito whenever he thought about it. Humanity only improved itself slightly throughout Alito's supernatural lifetime, henceforth the outdoors had not quite pleased the male lately. The female, however. The essence in her magic seemed so old. Just who was she, exactly? Alito had become overly curious at this point, while curiosity had a tendency to temporarily alter his usual personality- another sign Alito had just discovered while speaking to the one confronting him currently. With this, he silenced himself, and allowed the girl to speak.
_____________________________________________________________________________________