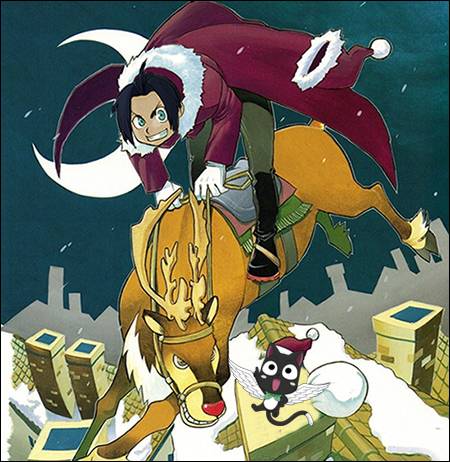 "What the hell're we doing again?!" "Good job, Blue!"
Night had long since set in over Magnolia Town, but between the ambient light given off by the moon and the snow-covered rooftops reflecting said light, this dynamic duo's escapades weren't exactly inconspicuous. "We still got lots of gifts left to give, so let's kick it into overdrive!" Angry hooves pounded against the shingles that covered the rooftops, knocking some loose and denting others. But most important was the fact that it was loud as all hell, which was counter productive to what these two were trying to accomplish on this night. "But why'd we need a psycho reindeer for this?!" shouted the boy at his companion as he desperately clung to the back of the rampaging animal. But the black Exceed brushed him off with a laugh as he dropped a hastily-wrapped box down a nearby chimney. "Everybody knows you need a reindeer to hand out presents, Blue..." Of course! Everybody knew that...

"And he's not psycho...he just doesn't like you!" A very vocal, "Whoa!" sounded out as the crazed animal jumped a large gap between two houses. But despite its best efforts to shake him, Blue was still in tow! It was a good thing he didn't have that awful motion sickness anymore or this ride would've been significantly less fun. The blue-haired lad wrapped his arms around the animal's strong neck as they continued their wild ride along the rooftops of Magnolia. He yelled, "You're not gettin' rid of me that easily, ya moose!" as the reindeer flailed about angrily, obviously intent on doing just that. And Lucky? He just shook his head and threw his sack of presents over his shoulder, taking to the sky with Aera to move onto the next house. "And Blue wonders why the reindeer doesn't like him..."