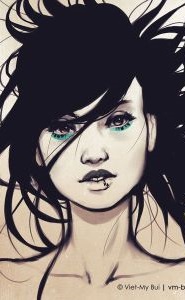 How long had it been since he last played? Last practiced? All this hoopla involved in joining the Rune Knights left the musician little time for his usual antics, let alone proper practice for the art his dear grandmother beat into him. If one was to get anything done in life sacrifices had to be made here and there, so he’d spent time instead towards sword practice, their little tests, and overall improving himself to this organization so they’d let him join. They made a lovely excuse to avoid his father’s business for the meanwhile, but if he went another moment without tickling some strings or keys the man might seriously go mad.

Busking had been a minor hobby, one he hadn’t indulged in for some time, as a way to judge how his music hit the ears of those around him. One could play “correctly” all they wanted, but if the notes lacked a certain harmony or feeling then the song would ultimately be rejected…he needed to inspire, not merely make noise. If the music became little more than cacophony to the ears of allies then there’d be trouble to pay not only with the currency of cuts, but heavens knows what his grandmother would do if he ever found himself in the same afterlife as her.

Placing the beat up hat on the ground, Faeral surveyed the street. People mulled about this little shopping route, hardly anybody in a hurry on such a fine and normal day. Lulls and tidbits of conversation drifted over from some of the nearby cafes ensuring there’d be some stationary audience if he couldn’t lull in some passersby. ’Regardless would mean a failure though,’ he thought with a small smirk, challenging himself. With nothing large like a festival going on or some celebration to lure the masses away he should really have no excuse as he produced one of his violins.

The dark wood shone a beautiful shade of red whenever the sunlight caught it, the man preferring to stick to the shade of his chosen corner, but to admire and gaze upon the instrument lovingly just for a moment… Resting it beneath his chin he struck a few, slow, mournful notes to test it out. ’It truly has been too long,’ he thought with a small smile, the sound created through the vibrations as the bow slid along those strings was truly a small piece of heaven for the man. A few curious glances came his way, some staying as little entities of light manifested around him, little vaper trails for tails following in their wake as each began emitting sounds.

It wasn’t long before the excitement of playing again finally hit and his tempo increased, an actual song beginning to play as his body moved to the rhythm of his playing. Children became captivated by both music and the apparent light show of his self-crafted ensemble as the dancing orbs provided extra beats. A passing couple and then two stopped to listen, one of the beaus going so far as to spin his lady a few times as they lightly danced, the youngsters beginning to prance and frolic about. Yet Faeral paid them no mind, eyes closed as he lost himself to the notes as they formed in his head, any clapping or cheers from the growing crowd drowned out. Even some of the conversation from the closest café dimmed as patrons became enraptured by the tune, people closing their eyes to listen whilst a few bobbed their heads a little.

It was a special kind of euphoria.

As he came out of it people clapped, a few calls for an “encore” rising above the percussive noise. Grinning he kept it to a bouncier tune this time, this time watching the people as a small circle formed of dancing couples and prancing children. Faeral could easily imagine the strings above the lot, manipulating their forms to move to the beat, compelled by that inexplicable force to shake their moneymakers. This time he could make a better assessment of his success, not so lost to the throws yet his body refused to stay stationary as he played his piece, the man a puppet just as much as those around him to music.

When the jumpy and lighthearted tune came to an end he bowed as people cheered, some tossing in some coins with the odd bill or two here and there. ”Thank you, you’ve been a wonderful crowd.” Many tottered off when it appeared he’d played his bit, the man making some small conversation with a few people before picking up the hat and walking off at a leisurely pace. He’d returned the violin to his little pocket dimension, the dark pyrefly backups blinking out of existence shortly after his performance. It’d been thrilling to play again, though he couldn’t help reflecting on a few spots where things could’ve gone better. ’Could’ve gone better, but things could’ve been worse as well…perhaps food before another performance?’ It’d be good to hide out a bit after drawing attention as he pocketed the money into one of the pockets of his long coat and placing the beat up leathery top hat upon his head.