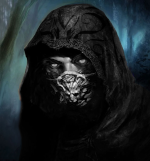 Constantine Rebellion once again found himself climbing the steps to the top of the Savage Skulls guild hall. He had been summoned by the Reaper King and he sounded less hateful of him than usual, so it had to be good news... or at the very least he probably want going to eat him. "Grehauhuhuhuhu, I wonder what crazy sh*t is going to happen this time." Constantine thought to himself as he came upon the doors to the guild-master chambers. He pushed open the doors and just as always the head of the Reaper King was poking out of the wall because his whole body wouldn't fit. "Grehauhuhuhuhu, you wanted me?"

The Reaper King began to speak. "Constantine, your success with your recent missions was not surprising to me... the surprise is how well you did them. I've come to the conclusion that you're stronger than you realised." Constantine began to reply "Grehauhuhuhuhu, what about it? Grehauhuhuhuhu, am I supposed to just act stronger now?" The Reaper King readied his life-leeching poison from his forcipules. "This toxin is stronger than the first one I used on you. It's something that being a poison demon slayer won't save you from, but it will help. It leechs the life-force from a persons body to the user. If you survive this not only will you be stronger, your poison demon slayers body will adapt and you'll be able to use it as well."

His eyes glazed over, this was a very cocky insect. "Grehahuhuhuhuhu, well get on with it." He stated as he held out his arm. Looking at the creature with discontent. He was not really impressed with the offer to be stronger, but realized that these last few missions required FAR more effort than he would ever normally give out. Perhaps getting stronger would make things easier for him in the long run. He would look at the massive creature and analyze it fully. Wondering what exactly this poison was going to do to him. Given the fact that as a demon the poison wouldn't kill him, it would still cause him a lot of pain in the long run. That was for certain. He was waiting for it to happen. Time to get on with the main event of the evening. He wondered how the others in his guild were progressing.

The Reaper King bit into Constantine Rebellion, this toxin was way more potent and kicked in immediately as well. Following the toxin came Constantine's demon force and a pure white aura over took his body as his laughter subsided. "Was that all? You were over exaggera-" He was stopped by another feeling, it was a strange pain, it felt as if his insides were trying to get out through his chest. As this happened his aura started changing color, orbs of the greenish aura that surrounded the Reaper King began to pop up in the white and kept filling over the white until it was white no longer. "Wait... What the fuck? What the fuck is happening?!"

Upon awakening the man would peer down at the ground. Looked like he had to take a little nap. But oh well, his laughing signified that he woke up. That was a crazy ride. The poison didn't do much to him but it burned like hell, was the same as pouring Vodka in your eyes. He still would have that shit eating grin on his face. He looked as his vision became more acceptable, and once it did he peered at what appeared to be a person whom had been tied up on the ground. "Grehahuhuhuu......seems we best see if this man was lying or not." He would hold his hand out in front of him and fire forth what appeared to be a cloud of gas, it would consume the opponent, and he would then feel as though the life-force of this enemy had been restoring him, similar to devouring poison raw. He would grin and start to laugh at such a high volume that it caused the victim to suffer as his life slowly drained from him. Every. Last. Drop. This was it, the end of that man. The start of Constantines hunger, he finally realized something. Lich was a leech, and so was Constantine. Power....yes that seemed to be something interesting.