"C'mon, Pops...can't you give us a discount?" came a slightly irritated plea. It's owner? A boy of about 15 who was seated at the tabletop of a certain food stall. His blueish-black hair lacked its normal spikiness today (something he usually took care of, as it made him seem taller) and instead hung down, his messy locks framing either side of his face. His attire consisted of a plain black t-shirt, a pair of khaki shorts, and simple straw sandals that covered the bottoms of his feet. Oh, and standing on two feet on the seat next to him? A mostly black cat with tufts of white fur on its belly and both cheeks. "Yeah! Can't you, Pops?" it spoke, mimicking the youth in a higher-pitched voice.

...did I forget to mention it could talk?

A sweatdrop formed on the back of the stall owner's head. "That is the discount price..." he retorted, prompting two over-exaggerated sighs from the duo. The boy planted his face into the counter, the older man only shaking his had in response before urning to deftly flip a few skewers of meat and vegetables on the grill. "You two can't even afford 200 Jewel? I thought you guys were supposed to be big Fairy Tail Mages now?" The cat was next to plant its face after a groan emanated from the boy. "We take all the Jobs we can..." began the explanation, slightly muffled by the tabletop he was speaking into. "...but when there's no work, there's no cash." What they said was true...but there was something that bugged the stall owner. There were Mages all over Magnolia Town who lived comfortably working for Fairy Tail...and not just them either! He'd seen plenty of other magic users from different parts of Fiore and most of em seemed pretty well off...so why the hell were these two in such poor shape? "Well what do you spend the money you get from taking Jobs on?" What could they possibly be spending all that dough on? The answer came in muffled unison and was tinged with shame and a bit of annoyance. 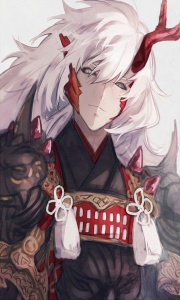 As Niji strolled down the streets of Magnolia, hunger started to creep up on him.

As Niji's stomach started to agree with his thoughts, he decided it was time to find a place to replenish himself. Though he was low on funds lately, he was sure he could find a cheap place to eat. I need to go on a job soon.. Niji thought. His absence from jobs lately has been the cause of Niji's low jewel amount, which is unusual for him. Usually Niji is always the one to be out adventuring, doing all the jobs he can, but as of lately he's been getting lazy."After I get some food, Ill get back on top of things" Niji muttered to himself. After aimlessly walking Niji came across kebab stall with two customers. One rather small individual with blue-ish hair, & what seemed to be his pet cat. The duo both had their heads down on the platform in front of them, rather in sorrow or sleepiness. The boy seemed to be at least around Niji's age from what he could tell so, he thought What's there to lose? Maybe I could make a friend as well as fill my belly.

Niji headed over to the stall & plumped down right next to the teen boy. "Heya! Im Niji, what's up??" Then he changed his focus to the merchant."Ill take one kebab by the way sir!" He once again looked at the boy waiting for a response.
Blues Coldsummer

A rainbow-haired stranger approached the stalled and sat down next to the hungry duo, introducing himself and ordering a kebab as he did so. And the owner shot him a quick, "Comin' right up." Now usually Lucky would jump at this chance to say hi and make conversation...but even he was too hungry to do so. So instead they both limply raised a hand/paw in unison and waved at the guy before going back to sulking. The stall owner just shook his head and tended to the food grilling behind him. "Don't mind those two...they're just whining about their stomachs."

As the man running the stall handed over the food, Niji payed the jewels that were required and thanked him. Then his attention shifted over to the tired souls sitting next to him. They were obviously not as spirited as Niji, and he could see that something was bothering the two. Thinking back to their half-hearted wave and the stall owner's comment, Niji assumed they must be too low on funds to eat here. He felt kind of saddened seeing this, especially in potential friends. You'd think from the way they're acting that these two haven't eaten anything in days! he thought. Niji opened his mouth once again, directing it towards the boy and cat.

If you guys need a little help I have some spare jewels. I'd be more than happy to get ya some kebabs! Thinking about it after Niji really didn't have jewels to spare, but he knew he had at least enough to feed the two... Maybe just enough. Taking another glance at the duo, Niji could tell that they were no stranger to a fight. Maybe I could actually use my new friends' help. He went for it. On one condition... You two have to accompany me on a job!

He hoped that he had sold them. Not only for the jewel reward, but for two potential companions to add to his list of friends.
Blues Coldsummer

In unison, both Blue and Lucky's heads popped up and turned to look at Niji. This guy who was essentially a stranger to the two of them had offered to buy them food. The Exceed's tail started to wag back and forth. He was all about it! Blue on the other hand was a bit more skeptical. He had to be. If both him AND Luck were super trusting of everyone they'd met, they might not have made it as far as they had. His eyes narrowed on Niji, sizing him up as tried to wrap his head around why he would do something like this. He was just about to ask what the catch was when Niji beat him to it, saying that the duo would have to take him on a Job with them as payment for the food. "No thanks, pal. We don't take chari-" "Sounds good, Niji!" interjected Lucky, bumping Blue's head out of the way and shooting a grin at the rainbow-haired newcomer. They were hungry. Niji seemed nice. And the cat wasn't about to let Blue's own sense of pride stop them from eating.

It was apparent that the cat was just as ambitious as Niji was to make new friends, but from his reaction the boy was obviously a bit more cautious when it came to this type of thing. Niji totally understood why he acted like this I mean I AM a complete stranger! Either way Niji got the answer that he had seeked.

The cat who was just seconds ago face down almost passed out was now bursting with energy & happy as can be. He shot a question at Niji to which the rainbow-haired man smiled & responded "I sure am! I'm a rainbow magic wizard, & hopefully you guys will be able to see it soon enough. You'll be impressed no doubt!"   After his response the blue-haired boy, less enthusiastically than his companion, asked about 'when he joined'. Niji was confused at first but then realized what he meant when he nodded towards Niji's guild mark. We must be in the same guild then! Niji's eyes darted over to meet the boy's cold gaze & then he opened his mouth to respond "What.. Fairy Tail? I actually just joined a few days ago! It's like the greatest guild ever. How about you? When'd you join?"  As Niji awaited his answer another thought popped into his head. "Oh and by the way I never caught you guys' names! Niji took a bite from his food and then looked back to the duo, smiling & hoping he could build a relationship with these two. They were the first people he had actually talked to from his new guild & he wanted to start out on the right foot.

A smirk crossed Blue's face. This rainbow-haired guy was on the up-and-up after all. The stall owner handed both the cat and him their kebabs, which they then preceded to devour immediately. "Ah...~" the boy vocalized as he found himself actually smiling. His default mood might've been "cranky", but a good skewer of meat was a quick way to fix that! "Rainbow Magic, huh?" Lucky put a paw to his chin as his eyes drifted upwards. How would that work? Did he command actual rainbows to attack people? 'Cause that'd be sweet!

Niji said they'd be impressed once they saw his Magic, prompting smirks from the duo. Blue had taken to books more and more ever since he taught himself Ice-Make and found himself fascinated by new magic. Lucky...was entertained by laser pointers...so of course he couldn't wait to see their new friend's abilities! The rainbow-haired lad stated that he'd just joined a few days ago before asking how long they had been with Fairy Tail. "We joined- ...what, Lucky?" The cat stopped pondering the idea of Rainbow Magic for a second to respond with, "A year ago." before going right back to thinking. You could almost see sparks flying off of his head with how much brain power he was using... "Yeah, that." Blue added with a small laugh. He stood up and tossed the bare skewer in a nearby trash can. "And now that we know you're Fairy Tail..." his words trailed off as he turned his gaze to meet Niji's. His mouth was contorted into his usual confident smirk. "...you're family." Their mushy moment didn't last too long however as Blue turned around rather quickly and began walking in the direction of the Guild Hall. "So let's go run that Job, huh?" Lucky snapped out of it after Niji asked the two of them their names. "I'm Lucky!~" was his introduction...and as for his companion?

"Blue. Blue S. Coldsummer." it was audible, but the boy had already begun getting further away. His Exceed partner hopped off the counter and ran after him, waving for their new friend to follow. "C'mon, Niji!" And thus was the start of a new friendship. Who knew? Maybe after they got back to Fairy Tail they could even find a third for their Job...