A Present and a First Weapon [ Ean Vanguard ]

A Present and a First Weapon [ Ean Vanguard ]

A girl with bright, pink-red hair, sprinted through the streets of Hargeon Town.  She seemed to have left the house in a rush, since her feet were lacking a pair of shoes and were pattering over the hot cobblestones, which had been baking in the heat of the sun for hours now.  To any passerby, perhaps she was late for school-- or work, something of that matter.  Indeed, Allison was in a rush, but only because she had realized that she had absolutely no birthday present for a mage she had met recently-- and Allison had been anxious to become friends with her.  Additionally, the redhead had received a job request that required either a lightning user, or some other kind of element that could counteract lightning, and Allison's magic didn't meet the requirements.  Therefore, she needed a weapon, and even though the girl had absolutely no idea how to wield one, she would be able to use the spell or spells later sealed within.

Plowing through the streets and narrowly missing knocking dozens of people over, the girl finally arrived outside a plain-looking shop, but one that had been recommended to her by another mage.  Allison truly knew nothing about weapons besides those that she made using her magic, and they were completely different to actual, physical weapons.  Shrugging to herself, the girl pushed open the door to the store, which was apparently called The Front Line, and glanced around to see whether there was anyone here.  "Hello?" she called cheerfully.  "My name is Allison!  I need to buy a few weapons... I was told that this was an excellent place!"  she beamed brightly at nothing in particular and debated exactly what kind of weapon she would end up buying.

To be perfectly honest... I haven't the slightest clue how to use anything besides my own magical blades.  But it should be easy enough to attack with a simple katana or such, and I know that she's an ice mage... so something icy?  Allison tilted her head slowly to one side and thought about the requirements-- the mage that she was giving the gift to was more inclined to use the spell she intended to imbue more than anything else.  "Uh, I guess I'm looking to purchase a simple weapon that people like me can use!  And um, also something that can withstand the cold-- and both have to be able to be enchanted with magic!"  The red haired girl beamed, pleased with the description.  "Is anyone here?" she called out once again.
_____________________________________________________________________________________
I WONDER WHEN THIS WILL ALL DISAPPEAR
❅STARING OUT OVER THE SKY, I SAY DREAMS ONLY, MAKE THE PAIN STOP. THEN I WAKE UP. NOTHING LASTS FOREVER❅ 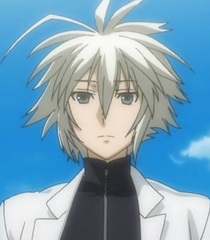 Re: A Present and a First Weapon [ Ean Vanguard ]

Ean was washing soot off his face when he heard the bell that signified the door opening. About ten seconds later he heard a girl yelling. Ean paid attention to what she was saying as he splashed water on his face and wiped himself down with a towel before heading out front. She sounded like she had no idea what she was talking about. She wanted a katana, simple enough. She also wanted something, icy? That was the worst definitive word he had heard in a long time from an obvious newbie. It was almost so bad he was ready to kick her out and have her look someplace else. One of Ean’s rules was to not sell weapons to novices who absolutely couldn’t handle what they were holding. He held that rule as an absolute to avoid people hurting themselves because they poked their eye out with the sharp metal stick made to hurt people. It was always such a pain throwing people out though. They never left quietly.

Ean walked toward the front before she gave a better description. From the sound of things, the weapon she wants for herself seems to be something simple enough. Also seems she’s picking something up for someone else. Perhaps her father ordered something and is rewarding her by letting her pick something of her own out.

Ean reached the front from the back and walked behind the counter. “You here to pick something up for somebody?” He asked bluntly before pointing her in the direction of the more basic weapons with his finger. Her eagerness was an issue but Ean doubted she would swing a sword in the middle of the street and cut a dog’s ear off. Fortunately Sola was asleep right now so she wouldn’t be playfully assaulting this woman.

The direction of Ean’s finger pointed to a display rack with a few basic weapons that were easy to use for rookies starting to learn weaponry. Behind him and the counter was an array of fantastic weapons that his late foster mother had forged and he had yet to sell. These were a different kind of expensive though, with the cheapest of the bunch being in the 100 thousands of jewels.

Re: A Present and a First Weapon [ Ean Vanguard ]

Allison blinked at the man who emerged from some place behind the counter, stunned for a few moments before breaking into a bright smile.  "Yeah!  My friend has a birthday coming up and I forgot to get her a present!  She's an ice mage, you see... and I'm going on this job, and I need something easy to use."  The girl randomly picked up the cutest of the weapons on the rack that the man had pointed to and set it down on the counter; she was positive that it would be simple enough to wield, regardless of whether Allison had ever done so before.  At least, hopefully... Turning to face the man again, the red haired mage tilted her head thoughtfully to the side and said, "I need something icy, like I said before.  Uh, enchanted with winter magic?  And it has to be pretty too!"  Perhaps that was a very vague definition, but Allison truly had no idea what she was trying to describe.  In fact, she actually went ahead and said it... "Do you have an idea?  I don't really know what I'm talking about," and gave her usual beam.

"And uh, price doesn't matter.  I think.  Unless it's really expensive?  But it still shouldn't matter... I mean, uh, yeah!  Price doesn't matter!"  The girl blinked and then after debating to herself for a few moments, finally settled on that.  "It just... yeah.  Price doesn't matter," she muttered again before raising up her eyes to gaze at the store person.  Hopefully, this shop would have what she needed-- if they didn't, Allison wasn't completely positive that she could find another within the span of time she had.  Perhaps gifting the ice mage with a magical item imbued with the same spell would make a good gift... but she had really wanted a weapon the last time Allison had asked.

"I um... she wants something silver and blue, I guess?  And she's kind of practical... but I mean, she likes pretty stuff too.  Uh... yeah, I'm lost!"  The last phrase was delivered with another smile, and Allison's mood wasn't spoiled whatsoever by her ineptitude when it came to explaining what her friend would probably want.  "I'll trust your judgement!"  It was definitely best to leave this to people who knew what they were doing.