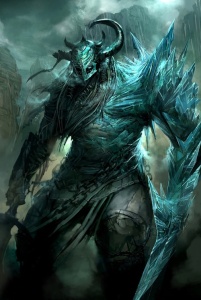 A fierce Rune Knight marched through the streets of Hargeon once more; a menace incarnate. The last time he was here it ended with a criminal having his kneecaps and shoulder pierced by icy javelins...and for that he had earned the city's gratitude. And now the hero was on his way  to complete yet another heroic deed...raising money for charity. The mage's pace slowed down as he approached the orphanage he would help raise money for - how far had he come? How many had he killed? All of it just to join the lowest level of an almost empty organization and use his power to entertain and attract donors...

The wooden frame of the couch creaked as Asgeirr sat down on it. He sat there in awkward silence as the old lady poured him a glass of iced tea which he graciously accepted. The cold drink relieved his tensions somewhat. The old lady sat down in a rocking chair opposite of him.
"Please excuse the children. They aren't very used to...visitors. At least one like yourself."
"Ah its no problem. Most of the guys in the barracks have the same reaction..."
"Oh...well anyways. You must be the young man that accepted my request. To be honest I never thought anyone would come to save this orphanage. It's been on the request walls for half a year now.."
"Us rune Knights would do anything for the citizens of Fiore" said Asgeir, hiding the fact that he dreaded taking this job. Why would a soldier have to do degrading work as an entrepreneur if there were KILLERS on the loose?
_____________________________________________________________________________________
Only those who have braved the Northern Wilds possess the right to call themselves men of the North
Asgeirr Frostwardt--> Magic!!!!

Several hours passed as the two worked out what exactly was to be done. The conclusion was to hold a fundraiser at the town square to attract donations. But to do so, the children would have to help out and sing as a choir. The only issue was that they were so intimidated by Asgeirr that none of them dared to leave their rooms. Not even their sweet elderly caretaker could get them to come out. So the mage did, what a mage did best: use magic. Although The Power of the North was meant for combat purposes, by tweaking the basic structure of his magic he could reforge the Everfrost into sculptures instead of weapons. he inquired about each child's favorite animal and sculpted them individually whilst engraving the names of the children into said sculptures.

Finally Asgeirr pretended to leave the house, placing the icy animal figures in front of all the rooms. Soon after the doors slowly creaked open as the children peeked out into the hallway. And as they saw the most adorable ice figures they had ever laid eyes on, the children rushed out of their rooms to marvel at the sparkly, blue wonders.
"Children, come here and listen to granny for a moment. Do you know who gave you these presents?"
"You?" replied a little girl.
"No, deary. It was the big man. He knows magic and wants to help us! But to do that you have to do your part. Especially after how rude you all were" said the old lady sternly.
One could see the guilt in the childrens' eyes - especially in those who began to cry. By simpliy glancing around the corner of the wall he was hiding behind, Asgeirr felt a certain warmth in his heart. For the first time it was a warmth that wasn't uncomfortable, but strangely pleasing. it was at that moment that he realized the true value of doing such trivial tasks. It was for neither gold nor glory - it was for this exact feeling. The mage left quietly for the town square to prepare just as the children gathered in the living room to practice their songs.

A week passed as the children and the mage made the necessary preparations. Asgeirr had put up flyers announcing the charity event as well as sent invitations to the noble elite of Hargeon. The event was going to be spectacular. The mage had formed dozens of sculptures of varying sizes; From figurines all the way to giant obelisks that towered 30 meters over the ground. And each one of them could be bought. Of course there was also a stand for some shaved ice - because what summer event would be complete without it?

When the day came to an end and the most people started leaving, all that remained were several large sculptures that could not be sold and the one who created them. Throwing sales pitches and making polite conversation all the time was a lot more tiring than Asgeirr had expected. he also determined that he wasn't exactly cut out for this job; it brought him no joy and wore him out worse than his own rigorous training regime that involved dragging a boulder through a swamp.
As the mage left for the orphanage to collect his reward, the massive sculptures behind him began to melt. Everost was ice that fed off magic after all. it may not falter when faced with flames, but if it has no source of power it will quickly dissipate into the clouds.