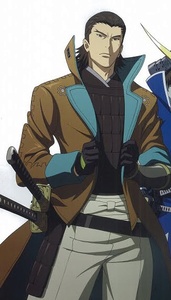 Backed into a dead end back alley, a young boy tried to muster his last bit of courage and shout out to the monster that approached him and his girlfriend. Only barely hearable, since the rain was disturbing a rather normal peaceful night. Which made it the perfect hunting opportunity for Agol, the very monster the lad was shouting at. A being that despite towering above any man, seemed to be perfect and silent hunter. A being that had no further resemblance to humanity. A creature when looking straight into its face, one would see a skull like appearance with eyes full of malice and hunger.

This was Agol, once a former man but after an experiment reduced to a new and horrific being. A being that every once in a while needed the lives of others to sustain itself.

He was so large, that his entire body alone would cover any escape route the young couple could have in the small back alley. Making their demise a certain thing.

The girl cried, while the man kept shouting. Even though in his eyes you could read that he already had lost all hope. That if someone would've heard his cries for help, they would have come by now. Then the moment was there, that Agol couldn't contain his own hunger anymore and would descent onto them. Shredding them to pieces as their life force would slip into Agol itself.
Dr.Stein

The red velvet liquid known as blood, that flown out of the open wounds. Was immediately flushed away by the the rain. Quickly spreading out through the creeks of the pavement, until the rain brought it towards the nearest sewer entrance. Where it would disappear into nothingness.

At that same time a mysterious figure appeared behind Agol, a dark silhouette that was barely visible from the pouring rain. Which intensity seemed to be increasing more and more, to a point that it was loud enough to overthrow any most sounds being made. Except his.

It was such an oddity, compared to the usual things that reached Agols ears. It was no scream, or the heavy panting of a scared human being. Instead it spoke with familiarity, a sense of understanding. Something Agol hasn't sensed in a long... long time.
He turned around, for enough that only part of his side was being revealed. Staring with one of his red eyes directly at the stranger that spoke out towards him. Softly hissing, yet assessing him at the same time.

Slowly it rose from its position, revealing a towering height. His head that was nothing more the a large creature like skull. Beige colored, with a conflicted contrast of the red liquid that once was the very lifeline of the victims on the ground. His very being was a horrific, with nothing that even slightly resembled that of a human. His hand were claws, his body seemed to have its ribs on the outside, with a black fur. Or even just blackness, one couldn't really see. Sticking out.
'Go.. away'

Agol didn't desire revenge, nor did he had any need for vengeance. Because the fact is that he was the creation of his own undoing. The one that experimented was himself, all those decades ago when it was still a human being. It was a noble pursuit at first, to become more then humanly possible, to ascend to the next plane of existence. To know it all and see it all, yet instead as so many that tried to pursue to become more 'divine' they failed horribly.

That was the only thing he remembered from his past, that he was his own creation. But anything besides that, was all vague, or better yet not even there anymore. Because of what came out of the other end of the experiment wasn't that man anymore, not it was Agol. A new being, completely blanc from any personality. With only the instinct to survive and be.

Agol brought his head down next to the man who called himself Dr. Frankenstein. Or Stein for short. Showing the real difference in their size, as the skull like entities head was by far larger then that of the scientist. Slowly hissing an answer to the very mundane question of asking his name.