Re: Purchasing A Pistol

Wearing her usual casual outfit with shoulder bag and walking calmly among the crowds of shoppers, Lucia came to Hargeon Town for the second time in three days to pick up an essential item. On the first visit it had been a passport. Today she was shopping for a pistol so that she would have a weapon with which to take on more dangerous and more rewarding jobs. She also wanted a basic means of self-defense so that she could defend herself against any local hoodlums who got any bright ideas about accosting her just because she was not part of a guild.

Lucia stopped off to the side of a shop to marvel at the shopping plaza, which was a square that featured a prominent statue of a robed woman holding an upturned jar that poured water into the fountain basin situated a short distance beneath her feet. Around the plaza were vendors who sold street food like hot dogs, pretzels, and even "slider" hamburgers. Lucia was not here for food, though. She was here for a weapon.

The blonde looked around the plaza and found a small shop in the far right corner called Hargeon Handguns. It was marked by a wooden sign with a fist holding a handgun pointing towards the right. It was not the most creative shop name, but if it could sell her a decent pistol she could overlook its name. Having found a promising shop, Lucia calmly walked through the busy plaza and patiently weaved through the crowds until she reached the front door of Hargeon Handguns, which had a glass door with the shop's logo in the form of a window decal on it. Lucia reached out with her right hand, opened the glass door, and went inside the shop.

The electronic bell connected to the shop door DINGed as Lucia walked into the small shop and noticed the display cases full of handguns lining the back and right walls of the shop. The left wall had been devoted to items like shooting glasses, earmuffs, ear plugs, and other things, but that was not what Lucia was here for. She was here for a handgun and nothing more.

"Hey Lady, I'm Edgar, the owner of Hargeon Handguns! Whatcha lookin' for today? Anything special?" A burly middle-aged man in a white tank top and blue jeans with a pistol in the holster on his right hip asked Lucia. He had a recently trimmed beard and short brown hair that showed signs of having recently been cut as well. His eyes were an icy blue.

"I'm looking to buy a pistol. I'd like something that can harm spirits and the supernatural, if you happen to have such a thing. If not I'd be glad to purchase something else." Lucia requested. The man briefly looked at her as if she had insulted him, then smiled widely.

"Well Lady, I just so happen to have somethin' that might be whatcha need. It's an old handgun someone sold me several years back. It's got funny text etched on the sides of the slide and it's got a snakeskin grip of some kind. I faintly recall the fella sayin' it could hurt spooks and werewolves and that kinda thing. I've never tried it myself, though... I'm too old to go huntin' ghosts and werewolves." Edgar told Lucia about a weapon that could be what she was looking for. He walked over to the display case on the back wall and Lucia calmly walked over towards him. He fished a small key out of his back pocket and unlocked the case, then carefully bent down and fished out a handgun for her, then locked the case again.

"Here ya go, Miss. I don't know what it's called, but the fella said somethin' about a shinin' light." He explained to her as she looked at the weapon. Lucia carefully took the pistol into her hands and read the text on the side. She could not decipher the text, but what the text read was less important than how it felt it her hand. Lucia gripped the pistol in her right hand and almost immediately noticed that it was comfortable to hold and weighed next to nothing. In fact felt like it belonged in her hand.

"It feels so light that I might as well not even be holding a weapon. It also feels natural." Lucia said to Edgar. She was not sure if she was meant to purchase this weapon or she was just settling on the first thing she found, but something about the handgun felt right. Edgar looked at the pistol and then looked at her.

"Well, I tell ya what, Lady. Since you're the first person who's seriously considered buyin' it, I'll make ya a deal. Normally I'd sell it for 7,000 Jewels, but since no one else seems to want it I'll sell it to ya for 5,000 Jewels and I'll throw in a holster for it." Edgar offered. Lucia set the pistol back down on the counter and examined it again. Something about it gave her a good feeling, so why not go with it?

"OK, deal." Lucia replied. She dug into her shoulder bag and fished out the 5,000 Jewels for the pistol and handed them to Edgar. He went into the back of his shop and Lucia could hear him opening cardboard boxes until he emerged three minutes later with a pistol holster for her new purchase. Edgar placed the pistol into the holster to demonstrate that it fitted, then handed the pistol and holster to Lucia, who immediately clipped the holster to the right side of the waistband of her skirt.

"Nice doin' business with ya, Lady. The next time you're in the neighborhood lemme know how your pistol works." Edgar said, giving her a small white plastic bag with a receipt and a business card. Lucia nodded and thanked Edgar for his time, then left the shop with her new purchase on her hip. Now that she had a passport, an iLac, and a weapon, Lucia would soon be ready to take on bigger and better-paying jobs. 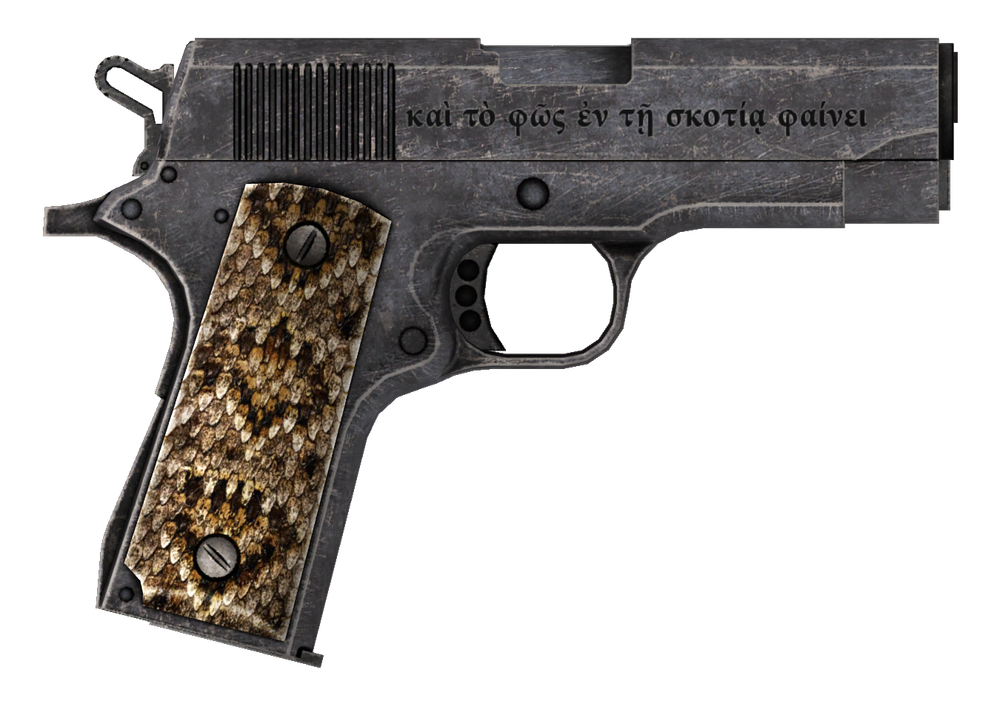