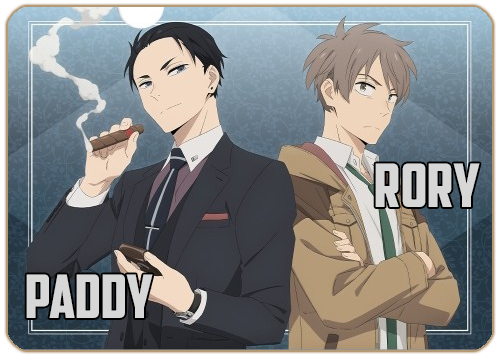 When there's no one left to fight, Boys like him don't shine so bright
Soon as I see the dust settle, He's out on the town tryin' to find trouble
The Holt Brothers

"Stop fuckin' fannying about ye fuckin' daftie." Paddy would call out behind him towards his idiot sibling who at present was trying him luck with a waitress who so happen to be passing by the pair. The heavy hints of his mixed Savanti accent making his u's sound like elongated o's. "Don't mind him, got a mad case of stick up 'is arse syndrome. So as I was saying, we needs to get ye to an hospital lass, you've surely got some broken bones after falling from heaven don'tcha know?" Rory cooed, lightly touching the waitress's arm as though to support her from her imaginary fall. The woman giggled, unsure how to take the cheesy line from the lad. On one hand it was the type of chat up line that would normally put a girl off such advances, but then again... he was awfully cute. Paddy let out an annoyed sigh, turning back toward his brother, he would grab him gruffly by the arm pulling him back from the woman.

"Apologies miss, I'll be getting him back to the asylum now." Paddy said, before adding in a smoother tone, "I'm happy to compensate for the inconvenience, maybes over a nice meal?" Paddy reached for the ladies hand, lifting it up, he bowed, kissing the back of her palm softly. Rory reached forward, yanking Paddy back from the woman, her hand slipping out of his grip. "Like she'd wanna go to dinner with a dryshite like yeself," Following this, the boys would quickly get into a scuffle, grappling with each other in a sort of standing wrestle. The woman looked on confused, not sure if she should try to break up the scrap she had unintentionally caused or to just walk after. After a brief moment would end with Paddy holding Rory in a headlock, handing the woman his business card. "Call me if your interested, and have a grande day now won't cha." He told her silkily, earning a soft blush and light smile from the girl before steering Rory back in the direction they had originally been walking in. As they strolled along, Paddy would continue to hold Rory in a headlock, pulling him along rather casually as he did so, all the while Rory attempted rather unsuccessfully to pull himself out of his brothers grip.

"GETCHA FOOKIN' HANDS OFF ME YOU WRONG 'UN! I'LL SMASH YE FOOKIN' 'ED IN!" He bellowed angrily as he struggled rather aggressively to escape, swiping at his brother rather awkwardly from the angle he was being held in. Paddy chuckled, waving casually at the passers-by who were staring at the bizarre pair who seemed to be fighting although they weren't entirely sure. "I'll let ye go once you've calmed down boy, we're here to get our passports sorted and buy some new bellers. I'm treating ye remember, or didja forget?" He told him in a firm tone, Rory stopped struggling, suddenly recalling the original purpose of their trip out. He seemed to take a moment to consider his brothers suggestion, before grinning up at him with an eager expression.

"Alright, am calm. Now let us go wouldja?" Paddy eyed him suspiciously for a moment, before complying to his twins wishes. As Rory straightened up, he would take a quick swing for Paddy's chin, a hit that was easily side-stepped by the taller lad. Paddy's retaliated by throwing his arm forward and slapping Rory round the back of the head, the contact emitting a large 'thwack' sound as he did so. "Ey! Oi! I'll quit, I swear!" He surrendered with a chuckle, holding his hands up as a gesture of peace. Paddy shook his head at the lad, despite the short smirk on his lips.

"Cannae wait to get me hands on one of these new makes, I hear there's an app where beautiful lasses are just waiting for yas. And like it's proper easy to get hold of them, you just swipe or somethin'. Can ye imagine?" He rattled on excitedly, as they made their way further into town. Paddy listened quietly as Rory nattered on for most of the way, offering a comment every now and then. Paddy was very much used to the way his brother went on when he had the prospect of an exciting new toy ahead of him. Rory had always been the excitable one out of the town of them, whereas Paddy was much more inclined to contain himself. Today he had dragged his sibling out to get some important things sorted for their travels, in order to continue to travel in Fiore they needed documents. Really out of the tasks, getting the passports sorted was the most important thing, but he knew that keeping Rory interested long enough to do so would hard enough on its own. At least having some bait to dangle in front of the lad would keep him focused and willing.

They finally arrived at the local postal service, stepping inside in such as way as they did any establishment - like they owned the place. The pair would swagger over to the front counter, Paddy leaned down, eying the bloke behind the glass pane with a warm smile. "We need some passport renewal forms, please and thank you." He told the gentlemen, the man nodded, reaching for the paperwork before sliding it over to the Holt lad. All the while Rory began glancing around the room, Paddy knew enough about his brother to fill the form in form him, meaning waiting behind him was pointless. Heading over to the joke card sections, he would pick up one of the cards for a better look, "Here Paddy... Paddy look at this... Paddy... FIONLEI! LOOK MAN!" Paddy who has been filling in the forms, spun his head round to glare at his brother.

"WHAT?!" He barked, steel blue eyes falling on the sight of his brother holding a card up, on the front in bright yellow the word 'WANKER' emblazoned on it with smaller font at the bottom of the card reading 'Meant to buy a birthday card but then I saw this and thought of you'. Rory snickered at his brothers irked expression before returning back to the shelf to examine more cards. Once Paddy had finished filling in the forms, he would call Rory over to him to sign his part of the form. Once the documents were all done and signed, Paddy would hand them back over the counter. Throwing the postal worker an unnecessary tip, before heading out of the shop. Rory put down the birthday card he was holding, before hurrying after his older sibling. The bell of the shop dingling behind him as they made their way onto the streets again, "Showin' off again Paddy, bet he thinks you're a right arse."

Paddy shrugged, pushing his hands into his pockets at he walked,  "You can bet he'll spend it though," He commented, it was a small thing but just been capable of making such a gesture was of great enjoyment to Paddy. He didn't want to be have wealth, he wanted to be wealth, and he wanted it to be recognised too. Which was why unlike he scrappy looking brother in his polo shirt and winter coat, Paddy wore the finest suits he could afford. It wasn't long before the lads reached their next destination, entering the technology shop with the giant silver Pear emblazoned on the front. They would enter the wide store, already buzzing with activity as people tinkered with screens. Rory's eyes widened significantly, his puppy like grin stretched across his face as he ran over to the closest item. Picking it up in his hands, he began to examine it closely, swiping his finger across the large surface. "Have ye seen this gizmo brother? The picture's is so clear, bit big for phone ain't it? Bigger than me head!" Paddy who was already moving further in the store, glanced back, eyes narrowing in amusement.

"That's a tablet ya divvy, phones are over there." Rory would drop the tablet hastily on the table, before following Paddy over to the phones. The lads would spend the next ten minutes perusing the devices, it wasn't long before one of the Pear 'Geniuses' would wander over after spotted Paddy's extravagant suit and begin selling up the products in the store. By the time they were finished, both boys would leave with an iLac and a tablet, with an addition top of the range laptop for Paddy. "Are ye sure this isn't too much?" Rory asked, eying his bags with uncertainty. He knew that his elder brother had earned quite a fortune, but sometimes he felt bad taking advantage of it. He would prefer to earn it himself, but he didn't quite have the same skillset at Paddy. His abilities lay elsewhere, this he knew. Paddy shrugged, strolling along the street with the pear shopping bags over his shoulder.

"Quit worrying, I said I'd get ya one. Fancy a bite to eat, I'm starvin'" Rory's head shot up, enticed by the suggestion of food, he hastily agreed. Strolling along the streets of Crocus once more, they would head toward the closest cafe.