Shion H.
The world is made of monsters; I just happen to have the longest teeth.
HP: 000/000
MP: 000/000
Active Spells: Spell 1 (duration), Spell 2 (x/x posts), Spell 3 (x/x posts)
Cooldown: Spell 1 (x/x posts), Spell 2 (x/x posts), Spell 3 (x/x posts)
Passives/Buffs: Passive 1, Buff 1, Buff 2 (only for those that currently apply)
Items Used: Sharpened Animal Shard, Item 2
Monsters Killed: x/x
The night air was cool and refreshing to her, a pattern of glowing stars on a satin sky above her. She was crouching on the roof of one of the abandoned stalls, elbows on her kness and her hands hanging loosely between her legs. The owner gone for the night. It was one that served ramen and mochi at the same place, since the owner had thought for some hellish reason it was a good idea to serve one of the most savory and salty foods with one of the sweetest at the same place.

There were stalls scattered in a loose square around the center of Magnolia. In front of her was Fairy Tail's guild hall. To her right were home items, like toiletries, furniture, artwork, and kitchen items. There were probably more, but Shion had gotten bored through the middle of examining them and had moved onto the next side, where there were food stalls. She could almost hear the sizzling of grills, and smell the delicious aromas wafting from the stalls. The last side, to her left, was filled with random stuff. There was a stall for ink and a stall for lamps right next to each other---she had checked.

But she wasn't interested in the stalls surrounding her, although she did need to get some food to take back to the tavern (too bad---they would have to wait a day. She'd bought the stuff with full intentions of staying in Magnolia, even though she could've gone back in just a day).

Shion was interested in the Fairy Tail guild. She wasn't looking to join it---she was happy by herself, living in the mountains and doing chores to be able to sleep in a tavern (she wasn't, but it was decent, and to hell if she was going to ruin it with a thoughtless comment). But...Fairy Tail was interesting. It had been a place filled with laughter and daily brawls, with a bar to the side. It'd been great, and then...well, something had happened.

They were less rowdy, and from what she'd heard, there was silence. Apparently the guild members barely interacted, treating the guild hall as a place to rest, sometimes eat, and pick up jobs. Did they even know each other's names? Shion blew out a breath, eyeing the heavy wooden doors to the guild with something akin to curiosity.

She picked up the hanging piece of the scarf between her pointer finger and thumb, rubbing it between them. The scarf shined like diamonds in the moonlight. Or maybe it was the starlight; Polonium----he, had liked the stars, after all.

She ran over tongue over her upper teeth, exposing them to the world. They were sharp, as though someone had filed them down to the finest points possible while still leaving some substance there. The wind had picked up, ruffling her hair, which was in a loose braid, wrapped through with poisoned wire (she'd learned to do this after the sixteenth time a man tried to force himself on her while grabbing her hair).

"What a night it is to be out," Shion grumbled in a low voice, her draconic accent dripping through. "What a night."
Sorry, it's short
IVYLEAF33

kuylrue
post word count: 316
total word count: 316
tagged: @
٩( ๑•̀o•́๑ )و
It had been a rather pleasant night for wandering around Magnolia.  The air was fresh, the sights were pleasant, and the food even more so.  Althea was a bit of a glutton, so she often made her rounds at the city’s food stands whenever she got the chance.  She didn’t need to eat, but it also wasn't vital for people to be happy, so why should that stop her?  The mind-boggling variety was a treat for all her senses, and they were closeby to Fairy Tail as well.  One stand, in particular, had her visiting often due to their tantalizing mochi and ramen.  The shopkeeper had once expressed some concern about selling food with two polarizing tastes in one place, but the mage had assured him that she couldn’t see a single problem with the arrangement.  People would be drawn in by the delectable scent of ramen, and after they have a bowl you could tempt them into having mochi as well.  It was the perfect marketing plan, people wouldn’t be able to stop talking to all their associates about it!  Two is better than one!  The math adds up!

In fact, Althea had been busy stuffing her face with mochi when she spotted a teenager standing in front of Fairy Tail’s guildhall.  Maybe it was just because of the scarf, but the slayer couldn’t remember ever spotting someone like them around the guild.  A strange person gazing at an office building came off as a bit suspicious, but most of the dubious figures Althea met had simply been mages.  And to be fair, she was confident in saying that she too was quite the incredulous character.  So the youth didn’t hesitate for a moment before approaching the blue-haired stranger.

385/unlimited words || shion hoshizora || writers block sucks~
Shion heard someone shout something in her general direction and ignored it, before she realized that someone was heading toward her. She twisted around, stumbling slightly from shock. The stall roof she'd been crouching on creaked ominously, but she ignored it and sat on the edge, tilting her head curiously to look at the...young woman, it seemed. Then she blinked.

"Join a guild? Join Fairy Tail?" she managed to say, the rough rasp of her voice odd against her own mouth. She'd been getting better at talking, but it all flew out the window when a stranger approached her in the middle of Magnolia. In the middle of the night. "I'm fine being on my own, less hassle that way."

She stared for a few seconds at the cheerful person, unsure whether they were naive or just that powerful. Her fingers twitched toward her scarf (don't do that, sign of weakness) absentmindedly, a sign of anxiety. Maybe she was overthinking it, maybe the girl wasn't that powerful, but there was always a chance.

"I just heard interestin' things about it, that's all," she muttered not-so-quietly. Mild poison gas rose off of her in small waves, and a passerby looked like they were about to faint. She didn't really care, but she tried to reign it in. Her anxiety was making it hard to control. She got off of the stall roof, smoothly transitioning from falling to standing (she'd put a lot of effort and hours into making it look like she was floating when she fell; it was still only semi-successful).

She motioned toward the stall the woman had left. The mochi and ramen one, apparently. Sighing internally, she started heading toward it. "You should finish your food," she mumbled. Shion awkwardly ordered a bowl of mochi for herself, shifting uncomfortably while she waited. The smell of ramen and mochi (it had a cold sort of smell) mixed together almost overwhelmingly, and she wrapped her scarf around her lower face for protection.

The plate full of mochi slid toward her.

She inched her scarf down, but then the scents and smells hit her full force again. Fuck, she thought to herself, whimpering slightly and cupping her lower face with her hands. It hurts, really, really badly...who's cooking spicy shit here?!

"Damn you, spicy ramen," she grumbled.

STATISTICS
HP: x/y
MP: x/y
Spells Used: none
Abilities Active: I have no idea what this means
Weapons Equipped: Sharpened Animal Bone Shard
Monsters Killed: my inner demons but that’s it
Other Notes: Light is easy to love; show me your darkness.
Theme: Control 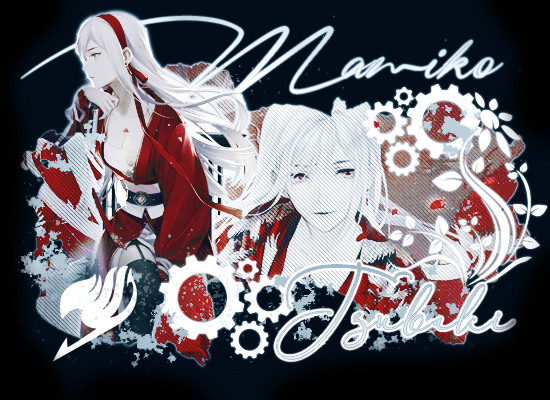 kuylrue
post word count: 459
total word count: 775
tagged: @
٩( ๑•̀o•́๑ )و
Althea took another bite of the mochi she’d been carrying around, her gaze full of curiosity as she watched the other teenager.  Typically, she found that joining a guild actually made the process of going on jobs much smoother.  Not only that, but you gained several colleagues to work alongside too.  If Althea hadn’t joined Fairy Tail, she wouldn’t have had the opportunity to speak with many of the people she associated herself with today.  The water mage had nothing against people who wanted to be left alone, but was this stranger just a simple lone wolf?

Perhaps… was this the legendary tsundere?!  The dragon that taught Althea slayer magic had mentioned the term in the past, but she never expected to find a real-life example.  The other girl hadn’t ended any of her sentences while stuttering “baka”, but the main idea was still there.  Or maybe the youth was overthinking things -- Fairy Tail was a major guild in Fiore.  As the workplace of many powerful mages, it’d be weirder not to be intrigued.  But as the blonde watched the stranger dexterously leap off the stand’s roof, she decided to ignore it for now and simply enjoy her night of gluttony.

“Yeah, I’ve come to this place a lot.  The owner always likes to put a little flavor into his dishes!”  Althea chirped before sitting down alongside the potential tsundere.  It didn’t matter if the food was spicy, salty, sweet, or sour, she would gladly eat it. “Since we’re eating together, I might as well introduce myself.  I’m Althea, but just Thea’s fine too.  Nice to meet you!”  The youth said with a lighthearted smile.  However, when she inhaled her ramen’s tantalizing fragrance, the slayer picked up a hint of something else.  Poison.

The gaseous substance didn’t seem that harmful seeing as Althea hadn’t noticed it earlier, so it was probably safe to ignore.  Additionally, it wasn’t as if anyone in the area was about to die from it.  Passerbys only exhibited symptoms of nausea and lightheadedness, so the mage could just go ahead and enjoy her ramen and mochi.  But she might as well identify where it was coming from with magic, just in case.

The slayer was busy slurping down ramen when she soon discovered that the poison’s source was actually the stranger sitting right next to her.  Usually, she’d interpret such actions as an assault towards the citizens of Magnolia, but it didn’t seem like the stranger harbored any ill intent.  Were they even aware they were exuding a poisonous aura?  Was it like an accidental fart?  Well, Althea might as well ask.