Player(s) Name(s): Zeref Kage
Player(s) Guild(s): Silver Wolf
Player(s) Team(s): N/a (Solo)
Job Link: Hot Spring: Spring Cleaning
Player Ranks: D-Rank
The sun was nice this time of year, even in the mountains around Silver Wolf’s Guildhall. Zeref stood at the edge of the hot springs looking down at the flier in his hand as the steam from the water below began to moisten the paper, the reading becoming a little smudged but the objective clear as day in Zeref's eyes. A simple task to clean the springs and locker rooms in order to be ready for the impeding days to come, with that he started by placing a small wood sign at the door of the female side. This sign would explain the closing of the hot spring for cleaning, this of course was to ensure no mishaps would occur between a customer and Zeref. With preparations in order he started in the locker room with a basic walk around, much to his surprise there was little to be picked up besides a few damp towels that were placed in the communal hamper for cleaning on Tuesdays. Leading to the only step he really had to do for this locker, Zeref began by rolling up his loose black sleeves revealing the gold trimming underneath. Once they had reached above his elbows he would secure them and follow up by grabbing the dry mop from the rack on the wall, with that he began to mop up the floor as it had been covered in stagnant water due to a lack of appropriate drain holes. It didn't seem to be long and the floor was dry and he wrung out the mop, placing it back in the rack he headed out to the springs themselves. As his hand pushed aside the current he was met with a shock seeing the leaves piled in the spring, but nothing he couldn't handle as he removed the skimmer from its wall mount. Only about thirty minutes passed as he scooped the last two leaves from the water and tossed them into the compost pile across the fence, hanging the skimmer back up he exited the woman's side and slide the sign to now block the men's side for the remainder of the job. Taking a moment to browse the men's locker room looking for garbage, which held the same bounty as the previous lockers, a few damp towels. With their placement in the hamper he pushed back the curtain revealing the hot springs that too had developed a covering of leaves. Doing as before he retrieved the skimmer and dipped it into the water dragging it across the top sweeping up the leaves so he could dispose of them in the second compost pile of course, he then once finished placed the skimmer back in it's rightful location turning to head towards the collection desk in hopes of being compensated. Upon arriving the lady at the desk smirked and thanked Zeref for his help in getting the hot springs ready for the coming season of visitors, to which he nodded and received his payment with a much deserved smirk. 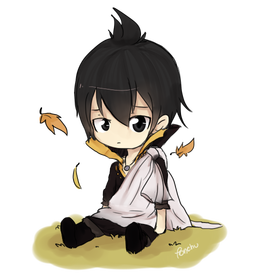